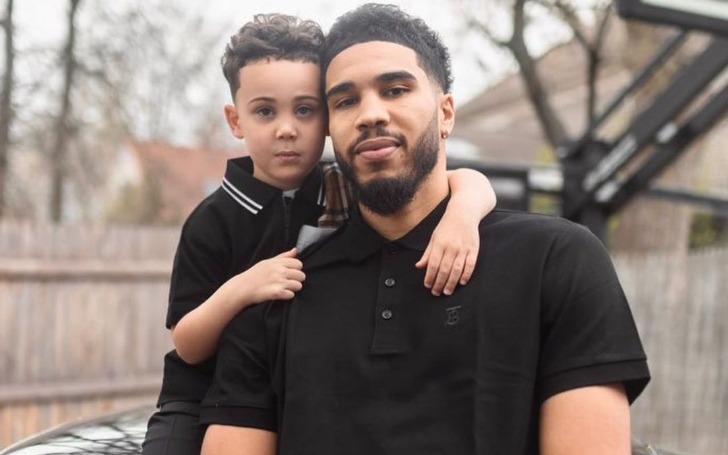 Jayson Christopher Tatum Jr. is the son of an American professional basketball player for the Boston Celtics of the NBA Jayson Tatum (aka Jayson Christopher Tatum Sr.). His father is popular for being named the NBA Eastern Conference Finals Most Valuable Player in 2022. He is also a gold medal winner on the 2020 U.S. Olympic team in Tokyo.

Besides, his mom Toriah Lachell is a hairstylist and runs a hair salon in Boston. Both of Jayson’s parents met when they were at Chaminade College Preparatory School. The couple soon started dating and welcomed a son Tatum Jr. Though the couple is no longer together, they are doing a great job when it comes to their parenting duties. Well, with whom little Jayson is living now?

So, through this article, today know all the inside details about Jayson Tatum’s son Tatum junior.

When Was Jayson Christopher Tatum Jr. Born? His Age in 2023

Jayson “nickname, Deuce Tatum” was born on December 6, 2017, in Boston Massachusetts, the United States. As of 2023, Tatum is 5 years of age and has a birth-sign Sagittarius.

On his 5th birthday, his father Jayson wished him a happy birthday on his Instagram. He wrote,

Deuce Day!! Happy 5th birthday to my best friend in the world🤞🏽🤞🏽🤞🏽Love you kid ❤️

At present, Deuce is growing up under the care of his father Jayson and his grandmother Brandy Cole in a luxurious way. In fact, the celebrity kid spent most of his time in the basketball stadium, especially when his dad is playing for a team.

Besides, Jayson is American as per his nationality and has a mixed ethnical background.

On Jayson’s 5th birthday, his father Tatum addressed him as his best friend. The father-son duo is absolutely close with each other and Deuce is often seen with his father in the stadium. Not only they are close but father Tatum even believed that the NBA star is also growing up together with his child.

As a matter of fact, Jayson’s father was just 19 and had just started his career in NBA when his son, Jayson Christopher was born.

Talking about his son, Tatum told,

“I think being able to go through this journey together, because I was 19 when I got drafted, it’s kind of like we’re growing up together. As he’s gotten older, I’m going through my career, sharing these moments, experiencing this together as we grow up.

Further, the father-son duo has such a beautiful bonding that Jayson’s daddy even uses his nickname Deuce on all his sneakers.

Tatum’s Father, Jayson Wasn’t Ready To Have Him Initially

As said earlier, the NBA player Jayson was just 19 when his son was born with his high school girlfriend. Although Jayson is too close with his son now, the NBA star wasn’t that happy when He found out that his girlfriend was pregnant with his child Deuce. Regarding this, Tatum told,

“I got sick to my stomach. This was a week or 2 before school was ending. So in my mind, I was like, ‘You’re about to leave Duke, get ready for the Draft, live my life.’ And then it’s like, no, you’re about to have a kid. I was selfish at first. I was more worried about being drafted than I was about being a dad.”

Whatever the case may be, they are now having a good time together!

Jayson Christopher Is A Mascot For The Boston Celtics; He Won The Heart Of Team Members

The 5-year-old Deuce Tatum is like a star among the Boston Celtics team members. He has won the heart of all the members of the team including NBA fans. Further, Christopher is playful with everyone on the team. In this regard, one of the players of the Boston Celtics, Marcus Smart said,

“He’s got everybody changing his diapers and, whatever he wants, they’re attentive to him. It’s definitely Deuce by far. Whatever Deuce says goes. Deuce cries and it’s always like, ‘What’s wrong, Deuce?

“Deuce is always trying to attack me any time I come around him, “That’s just who he is. We all love Deuce.

Similarly, Celtics forward Grant Williams also said He has a kind of love-and-hate relationship with him. Tatum has also been featured on Boston Celtics’ social media pages because of his craze among audiences

Mostly, Tatum spent his time watching his father’s games and wandering around the basketball players. In the stadium, the star kid even works for his dad’s teammates. He handed out the water bottles and towels to Celtics team members whenever it is necessary.

Besides, watching his father playing in the ring, it is obvious that Jayson Jr. has developed an interest in the game with some impressive basketball skills. William Grant, a Celtics player once talked about Tatum and his skills in the game. He told The Boston Globe that 5 years old bay is a “better passer,”

“He’s a great passer,” He’s a better passer than his dad sometimes. Honestly, though, he’s gotten so much better, too. He can dribble with both hands now. His jump shot looks good. He’s on his way. He’s coming.”

Furthermore, while his father Jayson was in his warm-up session, Deuce even displayed his ball-handling skills.

Back in 2021, his father, Tatum Sr. shared a video of him singing in Karaoke. He was singing the rhymes “Jonny, Jonny” and his daddy was supporting him in completing rhymes.

Looking at the video, it seems like, the little kid is pretty into music too.

Where Does Jayson Resides?

Going through his father’s social media account, it looks like Jayson is currently raising under the care of his father and his grandmother Brandy Cole. He resides in his dad’s $4 million luxury residence in Newton, MA, which is located about 12 miles west of the Celtics’ home court. His dad bought the house in October 2019.

In the meantime, sources also say the baby’s mama Toriah has a pretty good relationship with her son too.

He was born with two different colored eyes which in general seems strange. One of his eyes is brown and the other one is greyish blue. It’s not a disease but in medicine, having two different eye colors is termed Heterochromia.