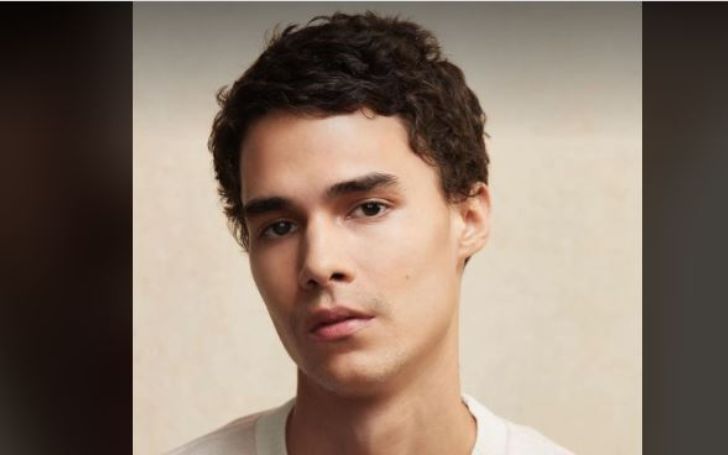 Jeff Wahlberg is a model and actor stemming out from The Wahlberg family. Jeff is the son of Jim Wahlberg which subsequently makes the “Mark” and Donnie Wahlberg his uncles. The half Dominican half-American Jeff is ambitious.

While he certainly is a relative of some famous names, Wahlberg’s acting profile branches far beyond the credit of his uncles or his family name. He has already shared the screen with the likes of Rashida Jones, James Franco, Lucy Liu, Eva Longoria, Danny Trejo, Benicio Del Toro, and others.

His movie roles show he is no stranger to the world of fantasy and action. Add to that is his readiness to jump headfirst into the fray of a new project that makes Wahlberg stand out as he continues to carve out his own path as a performer. Know more about him in the write-up below; his parents, how he got into acting, his modeling career, as well as the romantic aspect of his life.

How Old Is Jeff Wahlberg?

Currently, the 25-year-old Jeff was born on July 17th, 1996 in Boston, Massachusetts. He though grew up mostly in Miami with his twin sister.

Is Jeff Wahlberg White; What Is His Real Ethnicity?

Wahlberg’s mother is a Dominican while his father, Jim Wahlberg is an American.

To say more, Jeff, from his father’s side, is mostly Irish and a bit of Swedish, English, French-Canadian, and Scottish.
His paternal grandfather, Donald Edward Wahlberg, was of half Swedish and half Irish ancestry.

Who Are Jeff’s Father And Mother?

Jeff’s father works in the rehabilitation business. Wahlberg once said his dad has been a big battler of the opioid epidemic in America. Jeff’s father goes around the country and speaks to young kids.

The Boston-born actor’s dad apparently also shoots short films, but they’re all addiction-related with messages behind them. The Miami native’s dad after making such a film shows them all around the country at different schools and meet-ups to thousands and thousands of people.

Wahlberg’s father also gets thousands of people free treatment every year—to those who can’t afford it. He in addition is the president of a charitable foundation. On the other hand, while Jeff hasn’t talked much about his mother, he once did post her picture on his Instagram alongside the caption,

Though the Latin-American actor didn’t mention her name or who she really is.

Wahlberg didn’t start acting professionally until after he graduated high school because, for him, it was either college or moving to LA and doing his thing. After starting his acting career at an early age, Jeff’s parents had given him the option to continue acting or go back to school.

He said he chose the latter and thus, never went to college. While he started acting at a very young, it wasn’t until the mid-2010s that Jeff started to receive money out of it. Mark’s nephew initially began his performing career in a series of short films.

Jeff’s first on-screen performance was in the short, If Only. His original acting debut, however, was in the 2012 short film A Feeling from Within.

After A Feeling From Within, Jeff, over the next few years, appeared in another short, A Feeling from Within, Toyed, Please Don’t Come Back From The Moon, and Future World.

In the meantime, he also starred in the TV movie Instant Gratification, and guest-starred in the TV series Ballers and Counterpart as well. He has also been in the independent short film Toyed. Jeff’s additionally starred in James Franco and Bruce Thierry Cheung’s 2018 feature film Future World.

Prior to that, he worked with Franco in the 2017 film, Don’t Come Back from the Moon. It was Wahlberg’s debut full-length movie role.

After he had done Future World, Jeff returned home and a couple of months went by before he decided to move to L.A. Following that he started living with his friend and slept on her couch for a whole year. During this time. Wahlberg was simultaneously working at a restaurant as a server in Beverly Hills.

He quit that job right when he got Dora And The Lost City Of Gold, the live-action adaptation of Dora The Explorer. In the 2019 film, he starred alongside the film’s lead actress Isabela Moner and portrayed the character of Dora’s cousin, Diego.

Meanwhile, Wahlberg is also appearing as Rob Mahoney in the upcoming TV miniseries, The Girl From Plainville.

Jeff Wahlberg As A Model

Wahlberg says between acting and modeling, he started the former first. He though admits to being in love with fashion. In an interview, he once told he had tremendous respect for models and what they do and thinks it’s not an easy job.

Wahlberg states he is a much better actor than he is a model because he believes modeling is very scary.

For modeling, nonetheless, it was on Instagram where the agencies discovered him.

Jeff says he was in need of money, so he decided to do it. Plus, it was just something that he admits he was into.

Wahlberg loves the perks of traveling that come with being a model. He also loves getting to meet all other interesting people whilst doing so. Right after his discovery, Wahlberg’s first modeling job was for the Calvin Klein Jeans campaign.

It was the year, 2018 when he made his fashion world debut, starring in the Fall 2018 Calvin Klein Jeans campaign. The same year he also graced the cover of At Large magazine’s Fall-Winter 2018 issue.

When asked if he ever thought of following in his uncle’s footsteps specifically for that Calvin Klein campaign of Mark, Jeff responded by saying,

I don’t think I ever could. We’re very different, me and my uncle Mark. I would definitely think about it if offered the opportunity.

The Future World star added he might leave that alone and said that he doesn’t want to recreate it in that he believes it was iconic in itself and doesn’t need tampering.

Did Mark Wahlberg Give His Nephew, Jeff Any Advice?

Turns out Mark did give Jeff some advice as an actor uncle. The five-foot-eleven-inches tall actor in Aug 2019 talked about the best advice his Oscar-nominated uncle has ever given him.

“In terms of acting, he hasn’t really given me any. But in terms of business, just to never get comfortable and never lose my hustle,”

Jeff told to Too Fab. The Dora actor has said that he definitively looks up to his actor uncles and finds them inspiring but he tries not to think about the pressure to continue the family acting legacy.

Does Jeff Wahlberg Have A Girlfriend?

Although Jeff has sat up for a handful of interviews, in none of them has he ever come as close to revealing if he has a girlfriend or not.

Further, the Girl From Plainville actor is also not abundantly open about his love life on his social media handles. In fact, he is less than moderately exertive on such podiums and adds to his feeds quite a lot less.

Accordingly, it might be a while before people outside his close circle know who his significant other is.