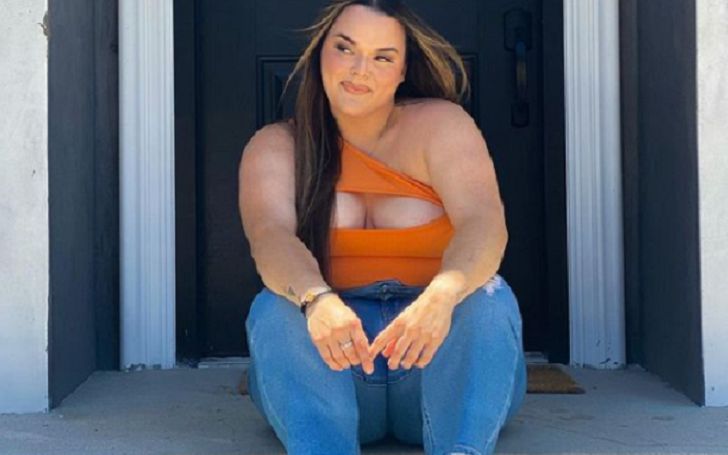 Jenicka Lopez is a budding reality star who came into the limelight after she appeared in a hit reality show I Love Jenni which highlights the personal and professional life of Jenicka’s late mother Jenni Rivera, the legendary singer and songwriter. Her mom died in a plane crash at 43. On the other hand, Lopez’s father also passed away a few years before her mother’s demise.

Aside from her family tragedy, Jenicka is doing great work on her own rights. She is an Instagrammer and YouTuber with considerable fan followers.

Besides, in this article, we will talk about her relationship status, weight loss journey, and more…

Who is the father of Jenicka Lopez? Details on Her Father’s Death

Lopez’s father was Juan López, a Nayarit, Mexico native. He met his future wife Jenni back in 1995. The former couple married in 1997, in a low-key wedding ceremony. They, however, separated in 2003.

Four years after their split, Juan was arrested over drug trafficking. He was then given a 10-year prison sentence. Sadly, Lopez passed away in a Lancaster hospital while he was still in jail on 14th July 2009. He died of pneumonia.

How old is Jenicka? Her Early Life

Her age is 23 as of 2021. She was born on 3rd October 1997, in the United States of America. She grew up in the spotlight always following her mother’s shadow. The younger daughter of Jenni is truly blessed to have the privilege of a lifestyle that not many get.

Besides, Jenicka is an American as per her nationality and belongs to the Caucasian ethnicity.

What does Jenicka Lopez do For a Living?

Lopez is a reality TV star. She made her television debut appearing in the reality TV series I Love Jenni in 2011. She appeared on the show until 2013, sharing the screen along with her mother Jenni Rivera, and her half-siblings.

In 2012, the occasional TV personality popped up in the TV series Chiquis ‘n Control. Moreover, Jenicka also appeared in The Real.

Her big break came when Lopez featured on UNIVERSO reality TV series The Riveras, a spin-off of I Love Jenni. It follows the life of the late singer Jenni Rivera’s five children and their continuity to preserve their mother’s legacy.

Is a Social Media Star

Jenicka is a social media influencer. She has a decent fan following on her Instagram account with over 1 million followers as of 2022. She mostly posts elegant and well-thought-out photographs on her social media handles.

What is Jenicka Lopez’s net worth?

Her net worth is around $500,000 as of 2022. She has racked such good fortune from her sporadical TV appearance and burgeoning social media career. On the other hand, her late mom had a $25 million net worth at the time of her death.

Does Jenicka Lopez Have a Boyfriend? Know About Her Relationship Status

Lopez is quite confidential when it comes to her love life. The Instagrammer has yet to reveal anything about her dating life. Because of her tendency to keep things private, it becomes harder to find out if Jenicka does have a boyfriend or not.

A chubby kid since an early age, Lopez is an avid advocate for a healthy lifestyle and is opposed to focusing on losing weight by doing some dieting and heavy exercises.

Lopez often uses her social media platform to encourage her fans to lead healthy living instead of focusing on losing weight. Echoing similar sentiments, the social media influencer wrote on the occasion of her birthday,

“And I am even down a few lbs. I am not on some crazy weight loss journey, I do love my body, but I am working on a healthier lifestyle… “

On the other hand, her older half-sister Jacqie Rivera also struggled with her extra weight. The reality TV personality later lost a whopping 70 pounds. She opened up about her weight-loss journey in the 2018 season of The Riveras.

Lopez has three half-siblings, two sisters, Chiquis and Jacqueline as well as a brother Michael, born in 1991 from her mother’s previous marriage to José Trinidad Marín. She also has a younger biological brother Johnny Lopez, born in 2001. He is an actor better known for his work on Crooked Stilo: Egoista, The Riveras, and more.

Born and raised in Long Beach, California, Jenni who was a prominent name in the music world died in an air accident on December 9, 2012. The plane crashed near Monterrey, Mexico while Jenni was traveling with six other passengers.