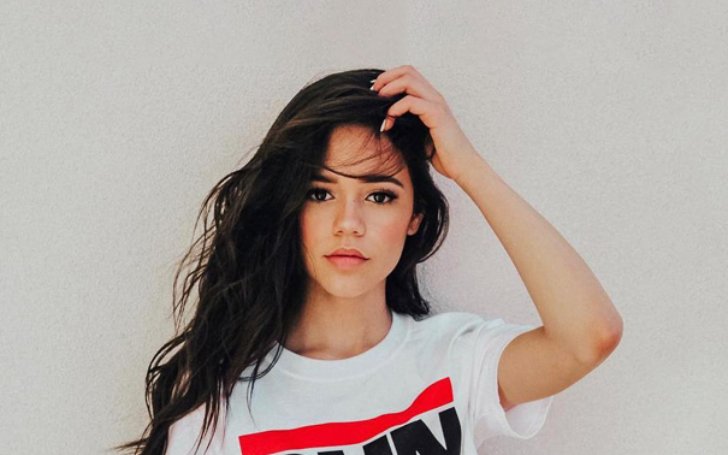 Jenna Ortega might be just 17 but she had her fair shares of link-ups. The soon-to-be 18 star’s rumored flames include Jacob Sartorious and Asher Angel, but has she really dated them?

Well, Jenna has altogether denied going out with anyone let alone be in a relationship with these so-called, ‘boyfriends.’

In this topic, we’re going to clear the air regarding her relationship and find out if she is dating? If yes, then who is Jenna Ortega’s boyfriend in 2021?

Who is Jenna Ortega Boyfriend 2021?

The answer to this million-dollar question is, she doesn’t have a boyfriend at present. Jenna is not dating anyone, meaning her relationship status is single.

Ortega’s love life has been a hot topic among her fandom for a long time. Apart from her rumored coupling with a few of her co-stars, her personal life is always behind closed doors.

Nevertheless, Jenna is unfazed by all the noise as she is living life her own way, one thing at a time. And honestly, now’s not the time to focus on the dating aspect of her life as her career has just begun. What do you guys think, tell us in the comment below!

Back in 2017, Jenna appeared in one of Jacob Sartorius’s music video titled, Chapstick. In the official video, both Jenna and Jacob had terrific chemistry. But what really started the rumor of their affair was the kiss between them.

At the time, the music video literally served as a catalyst, further flaming the dating speculation. What’s more, around the same time, Jacob shared a cryptic tweet that further solidified them as a couple.

Fans even asked him if he was talking about Ortega.

Be that as it may, as swiftly as the rumor started it all dissipated in thin air after a few months.

In 2018, numerous tabloids suggested Jenna is reportedly in a relationship with Andi Mack star Asher Angel. Tittle tattle about their affair started when they attended the premiere of Venom as a couple.

They wore a matching black outfit at the event and looked pretty loved up. Next up, they were pictured at a Fashion Event from where Asher shared a picture on his Instagram with the caption, “this one” together with a heart emoji.

In addition, the rumored duo also showed up at JustJared‘s 7th Annual Halloween Party. At the event, they channeled Ariana Grande and Pete Davidson, while Pete and Ariana were still dating.

All of this pointed towards only one answer. They were definitely head over heels for each other, although none of them neither confirmed nor denied their lovey-dovey.

Were Jenna and Co-star Isaak Presley a Couple?

Many of us know Jenna from the series, Stuck in the Middle where she played the lead role of Harley Diaz. In the hit Disney series, she appeared along with Isaak Presley. He played her oldest brother, Ethan.

Although on-screen they played brothers and sisters, their chemistry showed them as a real-life couple. Nonetheless, the duo remained tight-lipped about their behind-the-camera relationship.

Besides, in 2020, Isaak called it quits with his girlfriend, dancer, Mackenzie Ziegler.

Jenna Ortega Denies Going Out with any of her Rumored lovers

Many of you might be shocked to hear that Jenna has gone on the record and denied all of her flings. Yes, she blatantly said she never dated Asher and Jacob.

In early 2019, Jenna dropped the big bombshell while appearing at the “Just Between Us” podcast hosted by Bailee Madison and Kaitlin Vilasuso. At the podcast, she spilled the beans regarding all of her romance.

Incidentally, she also mentioned about four other guys with whom the internet linked her. That’s a new one, isn’t it?

Her statement reads, “According to the internet, I dated like six guys, [but I] dated none of them.”

Who is Asher Angel Girlfriend after Break-up with Annie LeBlanc?