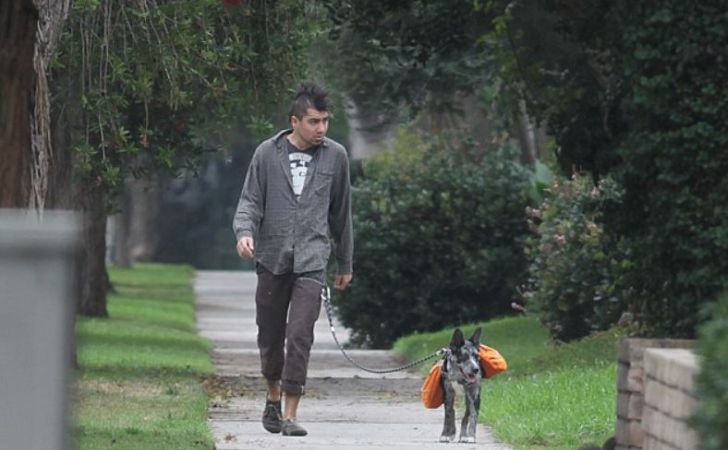 Have you heard the name, Alex Aniston? If not, he is the son of popular American actor John Aniston and his second wife Sherry Rooney. Besides, he is also recognized as the half-brother of Friends star Jennifer Aniston.

Unlike his parents and sibling, Alex has chosen a different path away from acting. But what does he do for a living? Is he married? What about his girlfriend?

Here, find out everything about Alex Aniston’s career & relationship.

Who Is Alex Aniston? Bio, Wiki

Alex Aniston is the youngest son of actor John Aniston with his second wife Sherry Rooney. He was born on May 2 in 1989, in Los Angeles, California. On May 2, 2022, Alex will turn 33-years-age.

He shares a great relationship with both his parents and half-sibling as well.

Although Alex comes from a family of actors, he does not seem to show a little interest in acting. He rather defines himself as a free soul and is more into traveling.

In fact, in his late teenage years, he moves away from all his family members, traveling alone in his black van. As per the sources, he had been traveling and living in his van, driving from one place to another, mostly to and fro between Alaska to LA and vice versa.

His eccentric lifestyle came to people’s attention after he was spotted at Burning Man’s festival in California.

Besides, Alex also identifies himself as an artist. As per one of his friends, he likes collecting animal skulls and even makes his own clothes. In fact, during his traveling times, Alex even made a living cleaning roadkill animals and selling them at taxidermy. Talking about Alex’s creative aspirations, one of his friends stated,

I feel he does his own thing, he makes his own clothes, he’s a really creative guy. I remember he was interested in things like animal skulls but I’ve not seen him that recently and not sure what art he does with them, I would describe him as an artist. He also likes to make original bikes out of different bike parts.

Moreover, Alex has a tattoo “Free Soul” on his abdomen which further highlights his creative fashion.

His first child, a son Ryat, with his girlfriend Adriane, was born on December 7, 2014, in Los Angeles. Likewise, they welcomed their second child a daughter Kira, who was born in July 2016.

Unfortunately, Alex and Adriane are no more together. Both Ryat and Kira currently live with their model mother. In fact, Adriane often gives a sneak peek into her life with her children. She seems to have moved on and is apparently enjoying her life at present.

After a split with Adriane, Alex began dating a girlfriend named Kiri Peita. The couple was first spotted by Daily Mail, walking together in California, back in April 2017.

As per the sources, he along with Kiri lived together in his squalid apartment in suburban California. Though the couple seemed to have a great bonding initially, there is no update on their relationship for a long time now.

Talking about Kiri, she was born in Australia and raised in Georgia, USA. A Veterinary Technician by profession, Peita belongs to the Maori ethnicity.

As we already mentioned, Alex comes from a family of actors. Both his father John and sister Jennifer are successful actors. His 87 years old father has appeared in over a dozen movies and TV shows. Some of his successful movies are Mission: Impossible, Diagnosis Murder, American Dreams.

Similarly, his sister is an A-lister in the Hollywood film industry. Making a film debut with Mac and Me in 1998, she has appeared in numerous successful movies and TV series. Some of her successful roles include He’s Just Not That Into You (2009), The Bounty Hunter (2010), and Wanderlust (2012).

How is Alex Aniston’s relationship with sister Jennifer?

Well, truth to be told, the half-siblings don’t have a great relationship. For a long time, sources close to Jennifer have claimed they are estranged from one another.

Alex, who is like a rebel in the Aniston family, loves to join protests across the country. Back in 2020, a source close to Jennifer said,

“No one has heard from AJ in months and he hasn’t been on social media since July. Jen knows he’s very into political protests and fears he’s mixed up in the riots in America. She watches the news of civil unrest in places like Portland – where AJ has friends and is likely to be hanging out – with her heart in her mouth, half hoping to see him so she knows where he is, but half knowing not too so she doesn’t have to fear for his life.”

For more than a decade, Alex hadn’t spoken to his father and sister. What’s more, he even once said that being related to Jen is like  ‘a pain in my ass for years.’

Born in a well-to-do family, Alex never had a proper profession to earn a living. He initially spends his life wandering in his van and is rather focused on fulfilling his creative obsession in the present.

Well, though Alex doesn’t have a proper income source, he enjoys all the luxuries in life with $10 million net worth owned by his father.