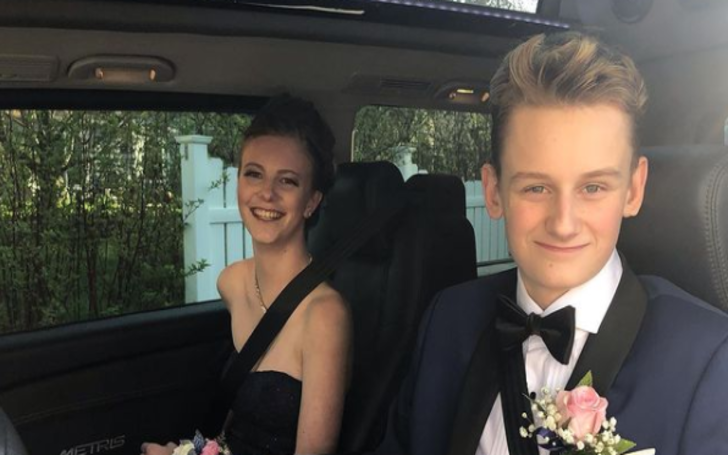 Evan Joseph Asher is a star kid of Jenny McCarthy, an actress, model, television host, and author, and her former husband John Asher, a director and actor. He rose to prominence after his mother revealed that he was diagnosed with autism. Asher also owns a YouTube channel called Gaming USA in collaboration with two of his friends.

Read all about how Evan’s autism developed and whether the situation has improved. Also, know how his mother went through an unconventional approach of treatment for her son and how it affected her relationship with Evan’s father. Additionally, see how Evan is doing himself as a social media star now that he’s a girlfriend for himself; all in the details below.

Asher was born on May 18, 2002, in Los Angeles, California. His maternal grandparents were a working-class Catholic family. From his mother’s side, Evan has German, Irish, and Polish ancestry.

Asher’s paternal grandfather, Edward Mallory is best known for his role as Dr. Bill Horton on the soap opera Days of Our Lives. Likewise, his grandmother, Bulifant Joyce acted in films such as The Happiest Millionaire and Airplane! She was also a frequent panelist on game shows including Chain Reaction, Match Game, and Password Plus.

Actress, Melissa McCarthy is Evan’s mother, Jennifer’s cousin. Asher graduated from Saint Charles East High School, St Charles, Illinois in May 2021. In April 2021, it was announced Evan will be attending Elgin Community College and will be majoring in Videography.

In the spring of 2004, Asher started to show the early symptoms of autism. He was a little over 2 years old when he had his first seizure. At the time, Evan’s parents were still living together.

Shortly afterward, paramedics arrived and concluded that it was epilepsy. Not long after, his condition worsened. Evan started experiencing a lot more seizures.

Jenny eventually took Asher to a neurologist at UCLA in 2005. It was the Autism Evaluation Clinic at the UCLA Neuropsychiatric Hospital that first diagnosed Evan’s autism.

The State of California (through their Regional Center) later confirmed his condition. Asher’s mental growth trailed behind by a couple of years.

Evan Joseph Asher has been under treatment at the ‘University of California, Los Angeles’ (UCLA) autism department and has shown significant improvement in the recent past.

Asher’s mental growth lagged as well. His mother left no stone unturned in finding the cure for her son.

Evan’s mother also reached out to the UCLA Center for Autism Research & Treatment (CART) program to treat her boy. The program had an incredibly positive effect on him. A few sessions later, Asher was able to construct six-word sentences and went on to learn the usage of “yes” and “no.”

By the time the program ended, Jennifer’s son was already displaying some emotions. Asher’s mother then arranged his therapy sessions at home, which majorly disturbed her financial structure.

Amidst his therapies, Evan also struggled with yeast in his intestines. Over the years and through several medical and non-medical treatments, he showed further improvement; he laughed at an abstract joke.

Over the course of his treatment, Evan improved a lot; he had difficulties talking, making eye contact, and friends. He now communicates fairly better, and his speech, too, has improved a lot.

McCarthy also went on to write few books on autism and has actively linked herself to many such organizations. Since Evan was diagnosed as autistic, his mother has written three books on the topic: Louder than Words: A Mother’s Journey in Healing Autism’, ‘Mother Warriors: A Nation of Parents Healing Autism Against All Odds,’ and ‘Healing and Preventing Autism.’

The last one, McCarthy co-wrote with Dr. Jerry Kartzinel. Interestingly, the first book Asher’s mother wrote, back in 1997, was her autobiography ‘Jen-X: Jenny McCarthy’s Open Book’.

The Scream 3 actress also spoke about the alternative methods she had adopted to improve Evan Joseph’s condition. She explained that they were not under the principles of the scientific community.

McCarthy even blamed measles/mumps/rubella vaccines for her son’s condition and later became an advocate for the anti-vaccine and “Autism Biomed” movements. Evan’s mother campaigns against vaccines and claims they caused her son’s autism.

The National Institute of Mental Health, however, has rejected her theory against vaccines.

The Time Asher’s Mother Knew He Was Bullied

Jenny once came to know that her son became a bully victim during summer camp. She, however, was happy to realize that his son was unaware of the fact because of autism. Asher did not understand the term “bully” back then.

McCarthy, nonetheless, got disheartened to realize that Evan believed his bullies were actually his friends.

His Parents’ Relationship; His Father Didn’t Agree With His Mother’s Approach To Treating Autism

Evan Joseph Asher’s parents, McCarthy met John Mallory Asher toward the end of 1998, while filming the comedy film Diamonds. Asher asked Jenny to marry in January the following year. They married on September 11, 1999.

People know Evan’s father for his performance as Gary on the USA Network’s series spinoff of the movie Weird Science.

John and McCarthy divorced the year Evan was diagnosed with Autism. The former inability to handle his son’s condition was allegedly one of the reasons for his separation from Evan’s mother.

Jenny said her ex-husband did not support her controversial research into autism. In an interview, John stated following Evan’s diagnosis, he was scared and considered himself accountable for his son’s condition.

The 2016 film A Boy Called Po, directed by John Mallory Asher, showed his relationship with Evan. Through the film, John tried to bring awareness, positivity, and acceptance toward autism.

After splitting up with John, McCarty married singer-songwriter and actor Donnie Wahlberg on August 31, 2014. According to sources, it was Evan who helped Wahlberg to propose to his mother during their vacation in the Turks and Caicos Islands. Later, McCarthy revealed her son walked her down the aisle and gave her away during the wedding ceremony.

The then-12-year-old Asher also delivered an impromptu speech addressing the guests at the wedding reception, which his mother described as “absolutely adorable”.

In November 2019, Evan’s actress mother told to Us Weekly — one of the reasons that McCarthy and Wahlberg’s relationship became so strong was the bond the pop singer formed with her son.

Asher has two half-siblings, namely, Xavier Wahlberg and Elijah Wahlberg, who are the children of his stepfather, Donnie Wahlberg, and his former wife, Kimberly Fey.

Evan’s stepfather, Donnie is a singer, songwriter, producer, and actor. He produced the reality series, Boston’s Finest. Besides. He is also known for his appearance in films like Zookeeper, Dead Silence, Dreamcatcher, etc.

Asher Is A Social Media Star; Has A Fancy Car

Evan Joseph Asher has been active on several social media platforms, especially Instagram and YouTube. John and Jenny’s son has over 46k followers on his Instagram profile in which he shares significant moments from his life.

Asher had originally started the YouTube channel ‘Gaming USA’ (10.9k subscribers) with his friends in December 2013. He later created a separate eponymous YouTube channel, for games and comic content, in July 2017.

Just days after he turned 17, Evan’s mother gifted him a shiny car, presumably, Mazda CX-5. Asher posted the news on his Instagram writing: “New car new life.” in the caption.

Evan Joseph Asher Ratted Out His Own Mother

In an interview with US Weekly, the former Playboy model said she can’t get away with anything because Evan loves putting her on blast.

Jennifer said she can’t really tell him anything because he’ll just call her out. She recalled how at one time she, Evan, and the rest of her family went through TSA at the airport.

McCarty remembered her son telling the security that they needed to look extra special at her. They kind of gave her a double look. But fortunately, she got through there.

The Illinois native added Evan would also rather out going to the movies because she would bring her own water or chips. The Singled Out host explained how Asher would always convince the theatre guys that something fishy is there in his mother’s purse.

The Mask actor, Jim Carrey, and McCarty were in a relationship for five years. They split up in 2010 after which McCarthy said that her child Evan, then 10, is in therapy because he missed the comedian.

But the Ace Ventura actor shot back at her comments saying he would always do what he believes is in the best interest of Evan’s well being.

The Canadian star said he loves Evan and will always miss him.

McCarthy opened about the matter in Howard Stern’s radio show saying she tried to ask [Jim] numerous times [to see Evan], because he asked several times.

She told [Evan] that someday he’ll cross paths, meet again. Jennifer, then, said how her breakup with Carrey was hard on Evan which eventually led her to take him to therapy.

Evan Joseph Asher Has A Girlfriend

Jenny’s son Evan Asher is currently dating his girlfriend Natalie Gallo. Asher is yet to reveal when he started dating Gallo. She, however, first appeared on his Insta on July 30, 2021. Sharing a picture of himself alongside Gallo, McCarthy’s son wrote, I Love this lady! 💕. @natalie_isabella20 💕❤️.

The red heart stickers pretty much confirmed Evan had his heart set on someone. The couple has shared several pictures of themselves on each of their socials.