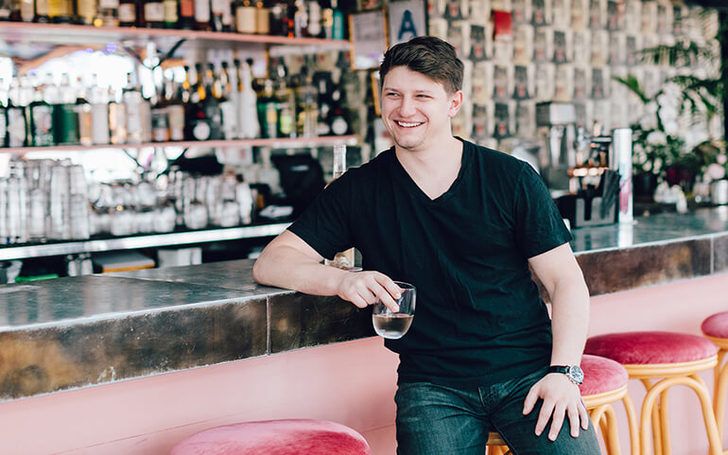 Jesse Bongiovi (fully, Jesse James Louis) is the son of a renowned pop artist, Jon Bon Jovi, and his wife, Dorothea Hurley. He is the second child and the eldest son of the Sexiest Rockstar and his longtime spouse.

Individually, he is the Co-founder at Hampton Water Co. Of all the children of Jon, Jesse has quite a lot to say; not only as a star kid but the speed in which he has been able to build an empire for himself.

So know what skills does Jesse Bongiovi has o his own. And why has he attracted the most famous among the other kids of Bon Jovi? En route to all of the details, also know about his personal life as well as stories about few past troubles.

Jesse Bongiovi Has An Italian And Slovakian Ancestry

Jesse Bongiovi was born on February 19, 1995, in New Jersey. Bongiovi’s paternal grandfather, John Francis Bongiovi Sr. was in the marines. And his grandmother, Carol (Sharkey) was a waitress at Playboy Bunny, though, she later became a florist.

Again, from his father’s side, Jesse is of Italian (the name Bongiovi comes from Sciacca, Sicily) and Slovak ancestry. He also has a bit of German and Russian ancestry from his grandmother, Carol. His famous father, Jon Bon Jovi has stated that he is a blood relative of singer Frank Sinatra.

James spent his early childhood in the neighborhood of Mercer Street.

James Louis went to Poly Prep High School in New York. There, Bongiovi was a two-time letter winner in football. He earned three letters in lacrosse as well and participated in the New York City football all-star game as a senior. The second child of Bon Jovi helped Poly Prep improve its record from 2-7 as a junior to 6-2 as a senior.

What’s more, he was an all-conference midfielder in lacrosse and a member of the BlueKey Society and SOUL Foundation. The Brooklyn native played for football head coach Dino Mangiero at PolyPrep.

During the freshman season with the Notre Dame Fighting Irish in 2013, Bongiovi, the senior cornerback, didn’t see any game action. In like manner, the number 34 missed out on the entire Sophomore Season (2014) while recovering from knee surgery. That was after he suffered a torn ACL during spring practices.

It took Jesse until his Junior year to make his collegiate career debut in a game against the University of Massachusetts (Sept. 26, 2015). James also allegedly played for the Duke Blue Devils.

He graduated from the University of Notre Dame in January 2017, having studied political science and business economics. The eldest son of Jon and Dorothea also enrolled in the College of Arts and Letters, majoring in political science. He though initially wanted to go into banking.

Jesse is a huge Patriots fan.

During the first year of college, the athlete turned businessman interned at Mogavero and Lee and then was a sales representative at Slice.

In December 2012, during a high school outing, Jon Bon Jovi’s son, Jesse partied like a rock star in Cuba — and his prep-school pal posted the photos to prove it.

The now lost social-media shots then appeared to show Bongiovi and his best friend from the posh Poly Prep Country Day School in Brooklyn puffing away on stogies and soaking up the rays from the rooftop patios, somewhere in Cuba. The trip had no shortages of booze, cigars, and a hooker on the Brooklyn school’s dime, as per then-lawsuit.

One of Jesse’s pals, Sebastian Andersen wrote in a blurry Instagram post of him, “First night in paradise #cuba.” It was apparently inside a restaurant. Other pictured showed rooftop balconies, a box full of Cuban cigars, and a large oceanfront pool. Jesse and Anderson even bragged to friends about sleeping with prostitutes, drinking alcohol, and smoking Cuban cigars

While the disciplinary squad later executed an investigation citing the doings as debauchery, but never fully reported the incident to trustees “to protect a ‘high profile’ celebrity parent of a student who attended the Cuba trip such as Jesse, himself.

Jesse Bongiovi Is A Business Partner With His Father; His Product Is On Gordon Ramsay’s Menu

Jesse was still in his senior year when he came up with the idea of the Hampton Water, a winery in 2017. Although Jesse has his father, legendary French winemaker, Gerard Bertrand and some friends as his partners, it was he who came with the label design and the whole marketing idea. The launch took place in Miami at the Versace Mansion.

The business brings its roses from the South of France but distributes the product from Hamptons, New York. From France to Napa Valley, the wine took off, selling 32,000 cases in the first year and seeing a growth of nearly 130% in sales in 2020. In addition, Wine Spectator named liquor the top-ranked rosé and #83 overall wine in the world thus finishing inside the Top 100 Wines of 2018.

Equally important is the fact that Hampton Water is also on the cocktail menu at Gordon Ramsay’s Hell’s Kitchen. The wine in addition appeared in Food Network star Giada De Laurentiis’ frosé cocktail.

The venture has a partnership with Umami Burger, the world-renowned premium burger brand.

Hampton Water with Bon Jovi group has also done several charities to help provide financial aid to underrepresented communities in the wine business. The father-son duo often promotes their wine business over social media be it making videos on TikTok or hosting Q & A over Instagram. Fun Fact: As a child, Jesse used to sell lemonade.

So What Is His Net Worth?

While it might be still some time to reach his father’s $400million+ fortune, Jesse might be already in the millionaire’s club. To say nothing of the possibility that he has the veto to retire himself any day he wants. What’s intriguing is the projection that if things go well, he would most certainly surpass his multimillionaire father by the time he reaches his age. Yet, if we are still to estimate his net worth, it could very well be in the ballpark of tens of millions of dollars.

Including Jesse, Jon has four children. Jesse’s eldest sibling and sister, Stephanie Rose was born in 1993, and his younger brothers Jacob Hurley and Romeo Jon were born in 2002 and 2004 respectively.

John and Dorothea’s oldest child and also Jesse’s elder sister, Stephanie Rose needed hospitalization after taking opioids while a freshman at the Central New York school in 2012. She fortunately recovered.

Prior to that, the authority had charged her with criminal possession of a controlled substance and criminal possession of marijuana. The charges were, however, later dropped under New York state’s Good Samaritan law. It was under companion Ian Grant, 21, a local law that prohibits prosecution of people who have had a drugs overdose.

Jon’s son Jesse Bongiovi is dating Jesse Light. And yes people have suggested they get married soon just to see what happens to name thing.

Although neither Jesse nor Light has revealed when exactly they started their relationship, they began appearing by each other’s side in the year, 2019. That year in July, the former cornerback, through his Ig, shared a short clip where he gave a sudden peck to Light.

Not long after, in September 2020, Jesse’s girlfriend, Light posted several images on her Instagram, the last of which showcased Bon Jovi’s son and her getting involved in a frivolous smooch.

After that, the pair’s relationship was clear as a day.

In May 2017, a large crowd of students walked out of the Notre Dame commencement ceremony in protest of the speaker, Mike Pence. The ex-vice president was delivering a speech that mixed platitudes about bright, dream-filled futures with a lengthy rebuke of political correctness on college campuses.

After that, the audience who chose to sit threw a mixture of boos and applause.

Interestingly, one former Notre Dame football player said he understood and decide to stand with his fellow graduates who walked out. And it was none other than Jesse who later tweeted that he did not protest with his peers, but was “disappointed and even disgusted to hear boos from the crowd as the protestors walked out.”

The entrepreneur then remarked the people who chose not to listen were no different than the young people who stood with Dr. Martin Luther King Jr. many years ago.

What Is Jesse Bongiovi Relation With Millie Bobby Brown?

Stranger Things actress, Millie Bobby Brown could very well be a member of the Bongiovi clan in the future. Brown’s famous romantic association with Jon’s second son and Jesse’s brother, Jake has made the actress more closer to the Bongiovi’s brood.

Millie Bobby Brown and Jake Bongiovi initially sparked the rumors of their relationship via their respective social media. At the beginning of 2021, the pair started to appear on each other’s handles in quite a doting manner.

It, however, was in the spring, that the British star and Jake’s relationship got a more legit confirmation. The pair shared a couple of images to their Instagram Stories getting cuddly. In one shot Brown was resting her cheek on Jake’s head, and she added a sticker reading, “Happy weekend.”

The alleged dating partner has yet to comment publicly on the status of their relationship. However, in the event that they admit the hearsay. And somehow managed to keep it long, Brown could likely be the future sister-in-law of Jesse Bongiovi.