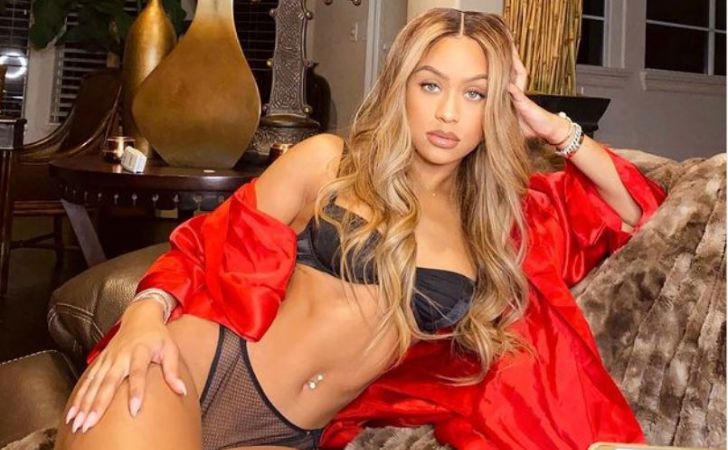 Jilly Anais is an American actress, singer, social media personality, and former cheerleader. She has appeared in numerous movies and TV series like God Send, Women Talk with Meosha, and others. Further, the TV personality has also been the title winner of Miss Teen Houston 2011.

Though she currently leads a professionally accomplished life, she has gone through a few controversies in her personal life. Apparently, she is leading a beautiful relationship with her current boyfriend Deshaun Watson, however, she preciously had quite a nasty split with her ex.

Well, how is her life at present? What about her parents? Be with us and find some interesting details about her personal and professional life.

A beautiful actress Jilly Anais was born, Jillyan Anais Moor, on January 2, 1996, in Houston, Texas. She is the daughter of father Jules K. Moor, and mother Theresa Moor.

Needless to say, she shares a great relationship with both her parents. Back in 2020, on the occasion of Father’s Day, Jilly shared some beautiful photos of her dad on her Instagram. She also came up with a lengthy message, in which she stated him as the “WORLD’S GREATEST FATHER.” This definitely reflects the kind of love she has for her dad. Here is the post.

Besides, Jilly also has a younger brother named Jules Moor. Well, he is an athlete, and like with any other members of her family, she also shares a great bonding with her brother.

Anais Was Into Modeling, Acting, And Sports In Her Highschool Days

Jilly has been an entertainer right from her childhood. When she was in her school at the Premier High School, she had already joined Ensemble Theatre, where she participated in numerous dreams. In fact, by the age of 13, she had already played the lead character in many school dramas.

With growing prominence during her school days, she soon made a jump into modeling and was signed by Page Parkes Modeling and Acting Agency. With the modeling agency, she even appeared in many TV advertisements.

Further, she was also into sports for a brief time. She actively took part in different sports like volleyball, basketball, soccer, and martial arts. Eventually, Anais also took acting classes throughout her university days to hone her acting skills.

After having numerous professional career, she professionally began as an actress in 2013, where she played a character named in a TV series named East Los High. Soon after that in 2016, she appeared in an episode of Freakish.

Likewise, in 2017 and 2019, she appeared in two different series; Scooby-Doo Is Back and God Send. Both of her roles were highly appreciated. She also made a guest appearance in the 2016 TV series Women Talk with Meosha.

She Leads A Successful Career As A Singer

Along with acting, Jilly is also into music. She professionally started her music career in 2014, releasing her debut single The Juice. Soon after that, she came up with an EP of the same name, consisting of tracks like 9 Lives, Lucky Girl, Danza, and Tough Love. It was written and produced by the LA Production duo The Invaders.

Later, she collaborated with Troi Irons and came up with another single named Afterparty. In the year 2019, she released a single named Lemme Know, which garnered decent views on YouTube in a short time. Moreover, she has also made cameo appearances on Demi Lovato’s music video Cool, and Morris Chestnut’s Rosewood.

The 25 years old singer Jilly is in a romantic relationship with American NFL football quarterback Deshaun Watson. The couple began dating in July 2019 and are together ever since.

But how and when did they first meet? Well, in a video Jilly posted on her channel on April 10, 2020, she sat along with her boyfriend Watson and revealed the details about her first meeting.

So, they reportedly met for the first time at a night restaurant. The duo first saw one another and instantly waved at each other. Eventually, after four days of their first meeting, Watson texted her back on her Instagram. The conversation soon turned into a love affair.

Jilly and Deshaun apparently began dating in June 2019. They also celebrated their 1 year anniversary posting a beautiful photo together on Instagram on June 3, 2020.

Also on September 25, 2020, she posted a couple of lovely pics on Instagram wishing her boyfriend on his 25th birthday. Check out the post here.

Needless to say, they share an incredible bond and we hope their relationship continues forever.

She Dated Dejounte Murray In The Past

Prior to dating Watson, Jilly was in a romantic relationship with professional basketball player Dejounte Murray. They began dating in May 2017. While things between them seemed pretty much strong initially, their relationship soon broke down.

Eventually, in November 2018, the duo separated. Their relationship came to an end after Dejounte called the social media star ‘gold digger.’ The footballer targeted her via an Instagram story.

Well, in reply, Jilly came up with strong words on Twitter where she questioned him how she was a gold digger when he had not ever paid her single bill. She wrote,

“A [expletive] will be quick to call you a gold digger.. but has never paid a single bill, doesn’t pay my rent, car note, phone bill the list goes on and on.. gold digger where? miss me with that [expletive]!”

After all the ugly remarks on one another, the duo has now moved on for good. After the split from Jilly, he reportedly dated Jania Meshell.

Jilly Has A Huge Following On Social Media

Like we stated earlier, Jilly is huge on social media. As of 2021, she has around 2.7 million followers on Instagram, where she goes by @jillyanais. Similarly, she has over 134k followers on her Twitter as well.

Similarly, she also has a channel on YouTube, where he has over 563k subscribers.

How Much Is Jilly Anais’ Net Worth?

Jilly has had multiple professional careers. She is an actor, social media star, & singer and thus earns a large sum of money as her salary. Besides, she recently released her cookbook named The Boss Babe Can Cookbook, which has become a new source of her income.

As far as her net worth is concerned, she is estimated to have around $2 million as of 2021.

Who is Johannes Bartl? Know about His Parents, Girlfriend and Career