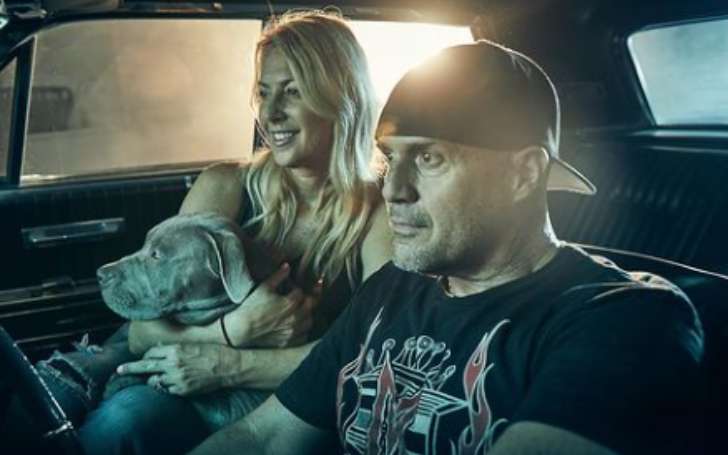 Joe Martin is an American television reality show star who shot to fame after his appearance in the TV show Biker Build-Off and Iron Resurrection. Apart from being a TV star, Joe is also a custom machinery designer, vehicle customizer, and fabricator.

Talking about his personal life, he is married to his wife Amanda Martin who worked alongside him on Iron Resurrection. It seems like the couple has a lot in common as both the husband and wife are TV stars, and business persons. What’s more? The pair are enjoying their marital life and going on exotic vacations whenever they get free from their schedule.

Well, since Martin keeps his life low-key, his information on the media is scarce. Regardless, we will try our best to uncover the details of his life in this piece below. Stay till the end to know more about the Iron Resurrection star Joe Martin.

Joe Martin Was Born In Chicago

This may be surprising to many of you but Joe Martin was born in Illinois, the United States which the television star revealed in a past interview. Later at the age of ten, he moved to Austin, Texas with his family. Since then, he calls Texas his home.

Joe Martin was born on April 16, 1969. As of 2022, Joe is 53 years old. He was born under the star sign Aries. Joe holds an American nationality and he belongs to a Caucasian ethnic background.

Since Joe Martin likes to keep his personal life private, he hasn’t opened up much about his family and early days. Nothing except the information about his work is known in the media.

He Has A Brother

Even though Joe’s family details are scarce, we have discovered that he has a younger brother Jason Martin. The two siblings are immensely close and are very supportive of each other. In fact, Joe Martin along with his brother also co-founded the company “Martin Bros Customs.”

The Biker Build-Off  star exchanged vows with his wife Amanda Jill Keathley who is most popular by her nickname Mandi. After her marriage to Joe Martin, she adopted his surname and became Amanda Martin. Joe’s wife Amanda is a businesswoman and a former banking executive who also starred in Iron Resurrection with his partner Joe.

As we mentioned earlier, Joe doesn’t speak much about his personal life, therefore, the details of his nuptials are still under the wraps. Neither has he talked about the duo’s first meeting or anything about their wedding.

Nevertheless, Martin’s wife Amanda posts vacation photos with her beau now and then on her Instagram. On the other hand, Joe and Amanda also foster dogs as both of them are dog lovers. Likewise, the pair also helps children with cancer.

Whatever the husband and wife are engaged in, they do it hand-on-hand and this is something to learn from this power couple. In a conclusion, we can say the duo is happy with their marital life and are enjoying their time together.

Does Joe Have Children From His Marriage?

Despite the fact that Joe and his girlfriend-turned-wife Amanda are married for years, the couple has revealed nothing about having kids. In fact, it is unclear whether the duo has welcomed any children from their marital relationship.

It is highly possible that they are simply trying to keep their children, in case they have one, away from the spotlight. Well, we hope they talk about this aspect of her life someday.

How Did Joe Martin Get Into Iron Resurrection?

Iron Resurrection is a TV show which is about Martin Bros Customs and is run by the Martin family, i.e., Joe Martin, his wife, and his brother. In this show, the fabricator Joe Martin showcases his motorcycle-building skills.

According to Joe, he was approached by the producers themselves as they needed automotive content for the Velocity channel. They were the same producers that Joe had previously worked with in the “Biker Build-Off.”

Eventually, Joe and his brother made a teaser to demonstrate to them, and they were stunned to see that. And as they say, the rest is history. The show has earned tremendous popularity and has already released its five seasons. In fact, Joe’s little brother Jason is one of the producers of the show.

Is Joe’s Brother Jason Martin Not On Iron Resurrection?

Well, rumors sparked Joe Martin’s younger brother had left the show back then and won’t be a part of it in the fourth season. Turns out those were just some baseless talks. Jason has continued with the show and the siblings are moving forward with the car restoration agenda.

On the contrary, it was Javier Ponce aka Shorty who quit the show because of his personal family matters. He was going to be a grandfather and therefore, wanted to spend more time with his family.

Besides being part of reality shows, Joe was always into mechanical stuff. He allegedly worked at the Monster Garage in Austin Texas when he started his career.

Despite not having any formal training, Joe kept practicing until he became perfect at his work. He wouldn’t let any chance of learning go in vain. In due course, he participated in the competition “Biker Build-Off” on the Discovery channel and luckily won it. It helped him gain his name and fame among the mass.

As one thing led to another, he then along with his brother started his own company Martin Bros Customs. Subsequently, after twelve years of doing his first reality show, he got an opportunity to be a part of Iron Resurrection which aired on Velocity Channel.

Martin is not much of a social media person, therefore, he doesn’t own any personal account on the social platform. Nonetheless, he has an account on Instagram by the name “martinbroscustoms” where he updates about his work. He has 176k followers with 558 posts there.

Meanwhile, his wife also owns an account on Insta under the name “mrs.martinbroscustoms” with 111k followers.

What Is Joe Martin’s Net Worth?

As of 2022, Joe has a net worth of about $1 million. He has made this fortune through reality shows and a mechanical career. Regardless, his main source of income is via custom machinery design and vehicle customization, and fabrication.