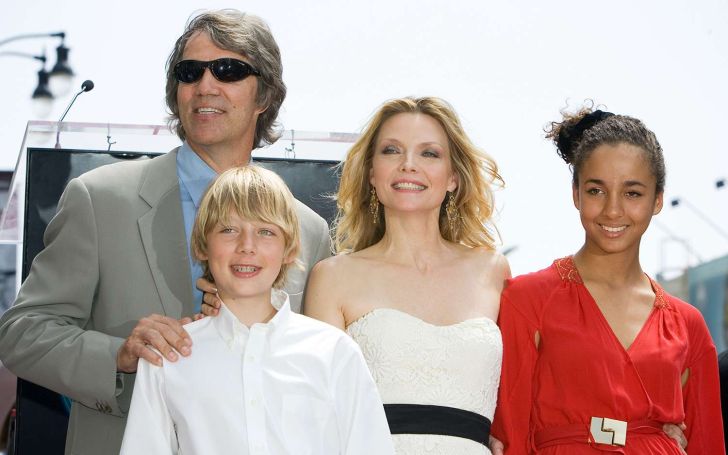 John Henry Kelley is the son of the American actress and producer Michelle Pfeiffer who was considered as one of Hollywood’s most bankable stars during the 1980s and 1990s. Further, John’s mom is best known for her movies like The Fabulous Baker Boys (1989), The Age of Innocence (1993), Where Is Kyra? (2017), and Avengers: Endgame (2019).

Like his mother, John’s father David E. Kelley is equally an established name in Hollywood. He is an American TV writer, producer, and former attorney who is known as the creator of Doogie Howser, Nine Perfect Strangers, Big Little Lies, Chicago Hope, The Practice, Ally McBeal, and many others. Having a celebrity mom and dad, John always became the central attraction for paparazzi however, both his parents and John himself are doing their best to maintain his low-key life.

Though he is living privately, today, we are giving our best to explore the hidden fact about John Henry Kelley’s Personal and Professional life. Have a closer look.

How Old Is John Henry Kelley? His Parents And Siblings

Michelle Pfeiffer’s son, John is 28 years of age as of 2023. He was born on August 5, 1994, in the United States of America under the birth sign, Leo. His parents are Michelle Pfeiffer and David E. Kelley.

Similarly, the celebrity child Kelley grew up in his hometown along with his sister.

Talking about his nationality, he is American. Likewise, as for ethnicity, Henry is Swiss-German and Swedish from his mother’s side and Caucasian from his father’s side.

John Was Named After His Paternal Grandfather

John (real name- John Henry II) was named after his famous grandfather John Henry “Jack” Kelley. His grandfather was an American ice hockey coach and a member of the United States Hockey Hall of Fame.

Kelley’s grandpa, the Massachusetts-born hockey coach was also the first general manager and the head coach of the New England Whalers of the World Hockey Association.

Where Did John Henry Kelley Go To College?

Regarding his education, there are no details in the media. However, some years back, his mom once mentioned John’s college while she responded to the interviewer’s question about how hard it is for her to watch her children going out in the world. Michelle said,

Let me tell you; it is no laughing matter. It is really hard. Claudia’s in her first year of college. She’s doing great.

In her further explanation, she talked about John’s college and stated,

My son is applying to colleges now. I remember reading an interview with Dustin Hoffman; his first child had just gone off to college, and he said, “Nobody talks about their [empty] room.” I feel like I’m going to cry just thinking about it.”

So, counting on this statement, John, in 2023, is studying in a college but sadly details about his college are behind the curtain.

John Henry Kelley Has An Adopted Sister; How Is Their Relationship

John has an older sister named Claudia Rose Pfeiffer. His sister Claudia was adopted by his actress mom Michelle when she was a newborn baby in 1993. As of 2023, she is 29 years of age.

Moving on to the brother-sister relationship, both of them are really close to each other. In one interview, their mom revealed that they have good bonding. She said,

“They’ve been close their whole lives, and they’re close in age. But don’t get me wrong: They have their moments of sibling conflict.”

The siblings, John and Claudia though have a beautiful bonding, but their interest area is completely in the opposite direction. In an exclusive talk with Good Housekeeping, their momma Pfeiffer talked about John’s early childhood days and his resemblance and difference with his sister. She stated,

“When [John and Claudia] were little, they couldn’t have been more different — John was into trucks and Claudia was into kitty cats, and he was eating bugs and she wasn’t.

The siblings have 18 month of age gap.

John Henry And His Sister Inspired Their Mother, Michelle Pfeiffer

His mother Michelle feels so fortunate having John and Claudia in her life. As per the actress, both of her children taught her the true essence of life.

On September 29, 2021, the Dangerous Liaisons actress shared her image with her both children and wrote some appreciative words for them. She wrote,

“I know, I’m late recognizing National Daughter & Son Day. John & Claudia. I love these two rascals. From the moment they were born they gave me and continue to give my life a depth of meaning beyond measure. 18 months apart. Best friends. Inseparable. “🙏❤️

Further, in one interview, she also stated that having kids in life helped a person to move out of negativity. She explained,

“Well, one thing that’s great about having kids, especially given my career, is that it forces you out of your narcissism. I mean, I’m in a career where my product is me. So it was nice to have something, someone, come along and take the focus off me. I really needed to give myself some distractions from myself.”

Seeing this, we can really say that John and his sister are really a source of inspiration for their mom and dad.

John Henry Kelley Career: What Is His Occupation?

As said earlier, though he belongs to a celebrity family, he is an incredibly private person. Kelley is not outspoken about his professional life and rarely makes appearances in front of the camera. So, in this regard, it’s obvious to say that we are unknown about what exactly John does to earn money.

But on the other side, we are well-known about his parent’s profession. As mentioned above, his mom is an extremely versatile Hollywood actress while his father is a multiple award-winning television writer and producer.

At present, there is no such information in the media regarding John’s love life. The celebrity son prefers to live a low-key life. He is also not on social networking sites so, it’s difficult to track his relationship status.

However, we cannot deny the possibility that the 28 years old adult Kelley may have a special one in his life. But still, until he himself comes out and talks about his relationship, let’s consider he is single.

What Is Kelley Doing Today?

Kelley is completely out of the limelight. So, there is no update regarding John’s current life. In addition, his mom very rarely talked about him in public. However, it can be assumed that the adult who is in his late 20s is somewhere working for his career.

As John’s profession is not known in the media, his net worth is yet to be assessed. But on the other hand, his famous mother, actress Michelle Pfeiffer has an estimated net worth of $250 million and so as his father David.