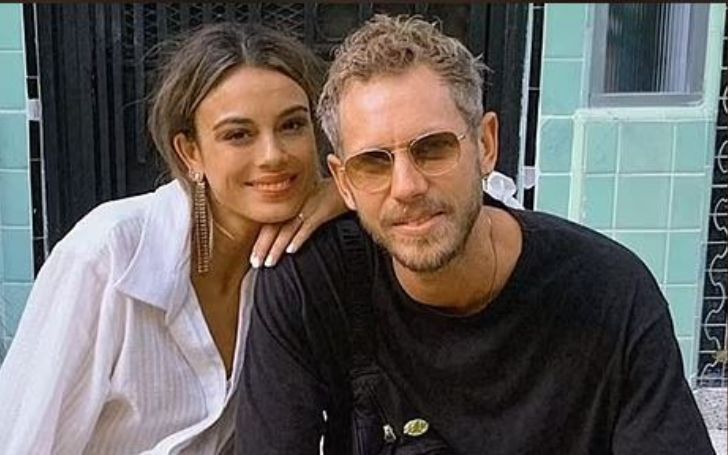 Jordy Burrows, fully Jordan “Jordy” Burrows is the ex-husband of the Fast And Furious; Tokyo Drift and Dynasty actress, Nathalie Kelley. The couple was together for a couple of years starting somewhere from early 2018 to the middle of 2020.

Although short-lived, Burrows and Kelley’s relationship gave a lot of writing materials to the gossip outlets. This included their initial secret dating, an engagement that happened the other way around, theories insinuating their breakups to the point where it actually happened.

Know all about Jordy Burrows, his marital relationship, career, wife, & other interesting facts.

Who Is Jordy Burrows?

Excluding Jordy Burrows’ relationship with the Peruvian descent actress, Nathalie Kelley, the gossip world has little to no documentation in regards to Burrows’ history or even his profession.

He though is purportedly a DJ and hospitality consultant. What’s also on the paper is he is a native of Berowra in Sydney, Australia. The ex-husband of the Hispanic actress is a former student of Asquith Boys High School, Asquith, New South Wales.

Jordy’s LinkedIn further states after graduating high school, he worked as a general manager for Ryan’s Hotels for nine years (2004-2013). Burrows then became the manager of another restaurant, The Bucket List Bondi, Bondi Beach in Aug 2013.

Four years later, Jordan would start working at Bondi Beach Public Bar, again as a manager as well as a licensee.

It Was Nathalie Kelley Who Proposed To Jordy Burrows

Nathalie and Jordan married each other in April 2018 but would end their union by June 2020.

The Lima-born actress is among the few to break the norm. As such, she was the one who landed on her knee to go and ask her then-boyfriend, Jordan for the marriage.

Some months after the wedding, the Peruvian-born actress who grew up in Australia, opened up about her and Burrows’ big day and shared her story of how she proposed to her former beau.

In an interview with the October edition of Harper’s Bazaar Australia, Kelley said,

‘He was everything I’d ever wanted in a partner.’

Kelley had recently wrapped her role as Cristal Carrington on Dynasty and was enjoying some off-time with Burrows.

The Baker And The Beauty star revealed after jointly visiting Tulum, Mexico, and Atlanta, Nathalie felt she had found “the one” and decided to ask him to marry her.

They were enjoying a holiday in the difficult-to-get-to city of Mérida – the capital of Yucatán province, with a colorful Mayan and colonial heritage, and four-hour drive west of Tulum.

A month after their vacation in Mexico, Kelley proposed to Burrows. Kelly said she was then filming in Atlanta, and she ended up proposing to him one night in their hotel. At the time, they had been for just three months.

“It was actually our ordeal driving to Mérida that led me to propose. I knew if he could put up with me tired and slightly hungover on a road trip, not to mention arguing with police about the toll, then he could be my husband,”

confessed the Vampire Diaries alum. She disclosed there was no planning and not even a ring.

Where Did Nathalie Kelley And Jordy Burrows First Meet?

Burrows and Kelley got to meet each other through a mutual friend a few days before 2018’s New Year in Australia. The latter was then on a break from the filming of Dynasty’s first season. She had been living in America for the last 13 years.

She once described her ex-husband, Burrows as extremely funny, relaxed, easygoing, not possessive or jealous, insanely kind, and generous.

Kelley And Burrows Had Their Wedding Over The Water

Burrows and Nathalie planned their wedding for two months. Kelley in an interview said she and Jordan both wanted something low-key and nothing over-the-top. They both wanted it to be in Australia, by the harbor, so they married at The Island [floating beach club], Potts Point,  Sydney.

The couple had also decided to spend their future together in Australia. Kelley’s mother did all the flower arrangements for the nuptials. Her family from Peru likewise sent 200 maracas as a wedding gift.

All the attendees received maracas as the dance floor came alive with Love Is In The Air by John Paul Young. Before Jordy, Nathalie was openly dating her Vampire Diaries co-star Zach Roerig.

Kelley and Burrows’ split rumors started to make headlines in early 2020. This was after fans noticed they’d been absent from each other’s Instagram accounts for months. Jordy, however, in April the same year, assured, they were still very much together.

‘Nathalie and I are still married,’

Burrows also said he was then in Australia for family reasons and his then-wife had to stay in the USA for her work. Explaining each other’s absence from their respective Insta handles, the DJ said they had made a decision to take their relationship off the photo-sharing app for their own privacy.

Although Jordan, himself confessed things were alright between him and Kelley, in reality, the pair indeed was having a rift in between.

This was clear when, in Aug 2021, Jordy Burrows’ then-wife Kelley confirmed her split from husband Burrows via sharing an Instagram post featuring herself with her now-boyfriend Andrès Alonso vacationing in Italy.

Burrows’ ex flaunted her romance with boyfriend Andrès Alonso in a series of photos from their holiday in Italy. Nathalie packed on the PDA with her long-haired beau as they posed against the Bay of Naples.

Earlier Kelley and Alonso had also appeared together on the red carpet of a UNICEF fundraiser from the sponsor, Luisa Via Roma, a fashion retailer. Before their gateway in Italy, Kelley and Alonso allegedly had been traveling together for at least six months.

Andrès first appeared on Nathalie’s Instagram in January. The then-post included a picture where Burrows’ former partner posed for a poolside photo in Atlixco, central Mexico with Andres.

All the imaging of Alonso started to appear after the emergence of the reports stating Nathalie had quietly split from Jordan. After breaking up with Kelley, Jordy reportedly moved to Byron Bay.

Although Nathalie has been active in the show biz industry for more than 15 years, she seemingly hasn’t had that many breakouts or bankable on-screen gigs. While she is a moderately busy actress in her own right, the Tokyo Drift star is yet to land her defining role. One which could catapult her to the league of big takers of the entertainment world.

Nonetheless, Kelley, by most of the accounts, has been doing fine with a reported net worth of over half a million to her name.

Though the other thing that doesn’t appear much practical to talk about is the wealth of her former partner, Jordy Burrows. It is mostly for the reason that there are a significant lot fewer magazine talks about Burrows. This, on top of virtually no mentioning of his financial winnings.