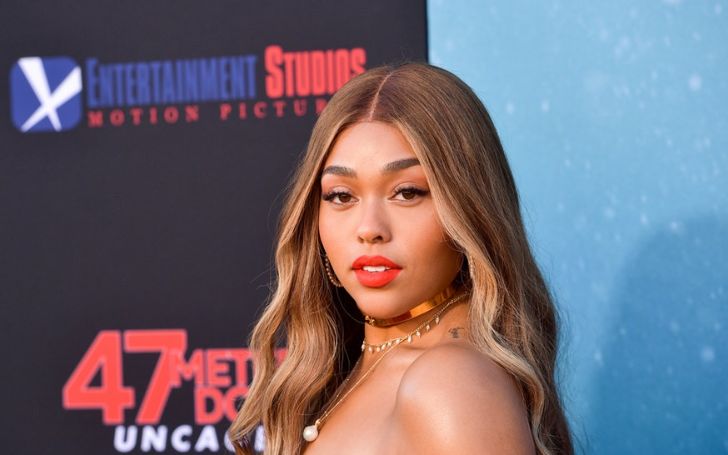 A former Kylie Jenner’s BFF Jordyn Woods ended all the controversy with Tristan Thompson in early 2020. But now the world thinks that the model is dating her new man. Well, let’s find out who is Jordyn Woods’ boyfriend in 2020?

It was reported that Woods previously in a relationship with a rapper and singer Dadju. Here, we have come up with all the details on her relationship.

In the meantime, also take a close look at her controversy with Thompson.

Who is Jordyn Woods’ Boyfriend in 2020? Confirmed Her Relationship With Karl-Anthony Towns

Jordyn remained quite secretive about her love life until coming out with her new bf Karl-Anthony Towns in September 2020. Woods made her relationship with Karl official after posting three photos with him on 26th September.

The new romantic couple wore matching Versace swimsuits in the photos, in which, they are seen cuddling with each other. She wrote on the post, “I found you, then I found me” and ended the caption with white heart emoji.

“There are darknesses in life and there are lights, and you are one of the lights, the light of all lights.”

The pair’s romance rumors emerged after they celebrated Jordyn’s 23rd birthday. The two also enjoyed jet ski rides alongside a few of Jordyn’s friends. The model even shared several stories with the handsome hunk on her Instagram.

They made it official just a few days later.

The rumors about Woods and Dadju began on March 9 when fans saw her in The Shades Room’s Instagram post where they seemed to be hanging out together in Dubai.

In the video clip, Woods, who was dressed pretty elegantly, opened a note from Dadju with petals of rose scattered in the background.

Well, her fans could not stop themselves from commenting on the Instagram post. One of the fans wrote,

Not only this, but one of the fans could not stop himself from mentioning her fall-out with the Kardashians saying,

“She’s really out here living her best life. Her biggest blessing was leaving that family and moving on with her life”

Apart from all these comments that suggest their relationship, a few of her fans thought otherwise and commented that Dadju is already married and that he and Woods just met for a shoot.

Conclusion: Was Woods and Dadju in a Relationship?

Woods and Dadju never addressed the rumors of their romantic relationship. Therefore, it became hard to say if the two were ever in a love affair.

On the other side, if a comment from a fan is put into consideration, Dadju is also married and has a child as well.

Dadju is a singer and rapper from Bobigny, France. Coming from a musical family, Dadju began his career as a rapper as a band member with the rapping duo Shin Sekaï. With the band, he released his first mixtape The Shin Sekaï Vol. I in 2013 and later released Volume II in 2014) and Indéfini in 2016.

Jordyn has been linked with several men in the past. As reported, she has dated men including Chris Brown, Davin Booker, James Harden, and Jaden Smith. However, she has not confirmed a relationship with any of these men.

Her relationship with Davin began when she was spotted with him on May 31, 2018, in West Hollywood, CA. In fact, they were even clicked by paparazzi. They reportedly broke up weeks before her alleged relationship with Tristan made headlines.

Woods, who was very good friends with Kyle Jenner, got into big trouble as she attended a house party in February where Tristan also happened to be a guest.

Well, Tristan and Jordyn were spotted kissing in the party and the matter became an issue after Tristan’s then-girlfriend Khloe got the report of all the drama at the party.

While the matter invited huge controversy including Woods and Kylie falling out and Khloe breaking up with Tristan, Woods never accepted the allegation.

During a Red Table Talk with Jaden Smith, she mentioned that all she was accused was untrue, saying,

Never once was I giving him a lap dance, making out with him, sitting all over him, It’s just we’re all together; we’re in a group. Never once did we leave the public area, go to the bedroom, go to the bathroom.

All the while she dealt with all these controversies, her mother has constantly been by her side.