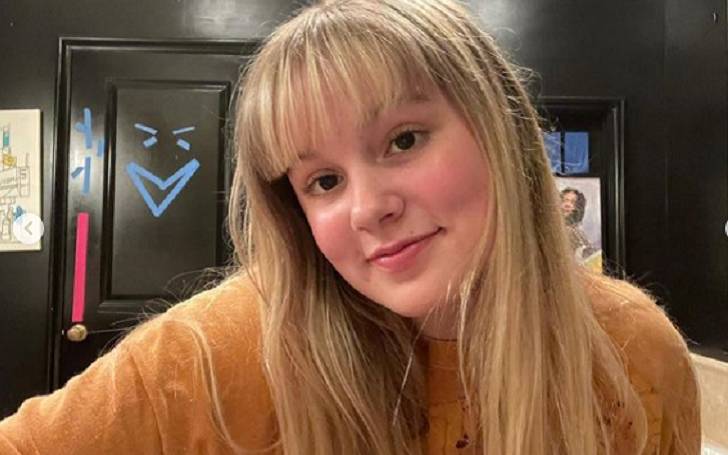 Josephine Riddick Hendrick (aka Ricki Hendrick) is the daughter of a late stock car racing driver Ricky Hendrick and a former The Bachelorette contestant, Emily Maynard. Tragically, Josphine’s father was killed in a dreadful plane crash near Martinsville several months before her birth.

Following the tragedy, Josephine’s mother Emily raised her as a single mother. She then married television star, Tyler Johnson and shares four kids with her husband. Ricki also has a close relationship with all of her half-siblings and step-father.

Let’s find out more about Josephine’s life as a posthumous child.

Who is Josephine Riddick Hendrick? Was Born After Her Father’s Death

Josephine is a star kid who rose to stardom even before her birth because of her parents’ popularity. Sadly, her father was killed in a tragic plane accident back on October 24, 2004, in Martinsville, Virginia. Ricki’s mom found out about her pregnancy just five days after Ricky’s demise in late October of the year. He died along with nine others due to pilot error in a heavy fog.

She moved to New York City for NASCAR’s Champions week with her mom and grandparents Rick and Linda Hendrick, making her first trip to the City. Additionally, in Feb 2006, for the first time, the posthumous child went to Disney World attending the first speed weeks in Daytona.

At the time of her father’s death, Josephine lived in Mooresville, N.C. with her mother and they later moved to Lake Norman.

Josephine’s father and mother were engaged at the time of Ricky’s death. As per ABC News, Maynard came across her NASCAR driver boyfriend Hendrick a year after her suicide attempt at the age of 15. The couple dated for three years before they got engaged.

However, the former flames had a tragic end to their relationship as Ricky passed away in the same year they got engaged. She said the tabloid,

Besides, Emily described that the birth of her daughter is a “kind of my light at the end of the tunnel. … I just kept on looking forward to June 29th because that was the day I got a piece of Ricky back.”

After years of sadness, Maynard started appearing on reality TV shows to find her true soul mate and eventually met Tyler Johnson. The duo tied the knot on 7 June 2014.

Ricki shares a strong bond with all of her half-siblings; three brothers and a sister. They all are much younger than her. Her mom Emily and her step-father Tyler welcomed their first child, a son named Jennings Tyler Johnson on July 16, 2015.

The two became parents for the second time when their son Gibson Kyle Johnson was born on September 16, 2016. A year after on 12th November, the couple’s third son Gatlin Avery Johnson was born. Emily gave birth to their daughter, Magnolia Belle Johnson on October 17, 2020.

They all are close to each other. Their social media posts are also pretty much reflective of the bonding they share as a family.

Know Something More About Her Father and Grandparents

Her late father was a stock car racing driver who began his auto racing career by the age of 15 in the Legends Series Summer Shootout. He made his debut in the NASCAR Busch Series at Myrtle Beach Speedway in 1999.

In addition, talking about Josephine Riddick Hendrick’s grandparents, she is the granddaughter of Rick and Linda Hendrick from her father’s side. Her grandfather Rick is a businessman and the owner of the NASCAR team Hendrick Motorsports.

Back in October 2011, Rick was also involved in a plane crash along with his wife Linda. Luckily, nothing bad happened at the time apart from some minor injuries.

What Does Josephine Hendrick Do? Details on Her Net Worth

Hendrick now more focuses on building up her academic career rather than involving in kind of work. So, her estimated net worth is still under review. On the other hand, her mother Emily’s wealth stands at $5 million.