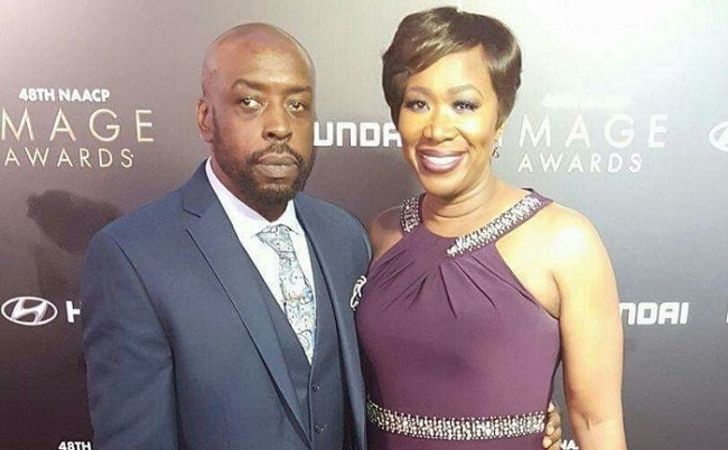 Joy Reid is an MSNBC national correspondent. In July 2020, the network announced that Ried would host The ReidOut, a new weeknight show at 7 p.m. Eastern time slot. Ried’s role also made her first black female primetime anchor in cable history.

Talking about her love life, Joy is leading a beautiful marital life with her film editor-husband for years now. The couple is not much open about their married life in public though.

Here we are going to find out every detail regarding Joy Reid’s husband and her romance with him. Also know does the couple has any children? And a lot more!

Who is Joy Ried Husband? Her Married Life

Joy Reid tied the knot with Jason Reid on 27th February 1997, in a private wedding ceremony. The two are leading a happy matrimonial relationship ever since.

They celebrated their 23rd marriage anniversary on 27th Feb 2020. Joy even posted a series of photos of her hubby on Instagram while commemorating the big occasion.

❤️ from day one. Happy anniversary to my forevah-evah, @jasonreid234

Spent 12-year at Discovery Channel and A Year at NBC

According to his Linkedin page, Jason joined Discovery Communication, LLC in July 1999. The company edited shows and network promos. He worked as a senior editor for Discovery until October 2011.

In Jan 2012, Ried landed the job as a freelance editor at NBC Universal’s division Peacock Production. He left the job after a year in Jan 2013.

The two gradually began dating. After years of love affair, they walked down the aisle in 1997.

The Couple Has Three Children

Joy and spouse Jason are proud parents of three children. The couple welcomed their first child, a daughter named Winsome Ried, two years before their marriage on 29th April 1995. Joy celebrated her daughter’s 25th birthday by posting a number of pictures on Insta in 2020.

On 15th June 1997, Joy gave birth to their second child, a son, Jmar Reid. Furthermore, the couple became parents for the third time after they welcomed their youngest son Miles Ried on 22nd October 1999. Doting mom Joy posted many adorable pictures of her boy commemorating his 20th birthday on Insta.

In late 2016, the cable host also attended the White House Christmas party with her daughter Winsome and son Jmar. She shared the family photo with former President Barack Obama on Instagram.

The family of five currently resides in Pembroke Pines, Florida.

Their Son Jmar Reid is a Promising Actor

The 6 ft 2 in tall Jmar Reid graduated from The New School, Eugene Lang. He studied theatre and creative writing at the college. While studying there, he developed a strong passion for acting at the time. In the meantime, the emerging actor also appeared in many plays, musicals, and films.

His TV and film credits include MTV TRL Live Revival.

Jason is a film editor and co-founder of ImageLab Media Group. He co-founded the company with his wife Joy in Jan 2005. The company deals with documentaries, feature films, and many other projects.

People often mistake him with a producer of the same name, Jason Ried. This is the same producer who produced the award-winning documentary, Dirtbag: The Legend of Fred Beckey.

Because of their similar names, several tabloids have mistaken Joe’s husband with this guy. Here’s a picture of the producer Jason Ried for more clarity.

Be with Celebsuburb.com for more updates on celebrities.