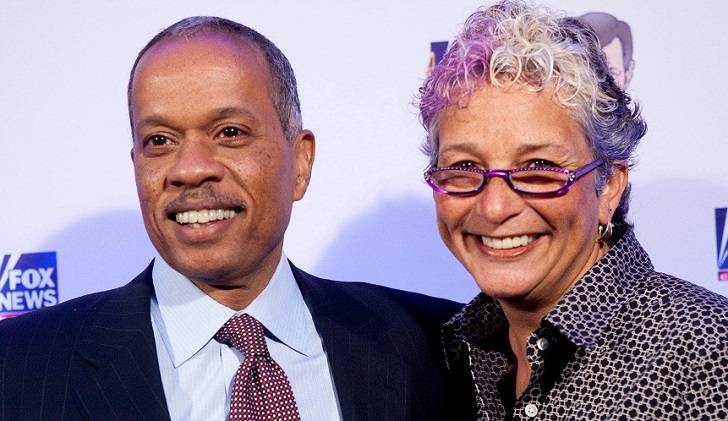 One of the quintessential journalists and liberal political commentators Juan Williams, 67, currently serves as a co-host of Fox News Channel’s The Five.

Besides, Williams is also a devoted husband and a family member. It’s been over four decades since Juan is blissfully married to his wife Susan Delise and their relationship still looks pretty strong. The two are also parents of three children.

In the honor of the power couple’s years-long journey and their support for each other in every toughest of times, here’s is a look at their adorable love story.

Williams tied the knot with his wife Susan Delise on 1st July 1978, in a private wedding ceremony. The two are still together without showing any signs of slowing down.

Their staunch supports and commitment to each other seem like it’s never been stronger.

Apart from being the great Juan William’s wife, not much is known about Susan’s personal or professional details.

America-born Delise was once featured on Fox & Friends, a weekday morning show back in July 2015. She taught the hosts how to cook Maryland blue shell crab legs perfectly.

Susan said she learned the recipe from her late mother. Apparently, they used to celebrate Mother’s Day with crab legs as a family tradition.

How did Williams and Delise first meet?

Susan rarely makes a public appearance while Juan despite being such a popular figure in the media field has kept their love story ultra-private. Thus, it is still unknown when the two first met.

But we appreciate the quality Williams possesses of handling personal and professional life hand in hand.

On 20th October 2010, Williams’ contract was terminated by National Public Radio (NPR), after his remarks on The O’Reilly Factor. On the same day, Fox News offered him a three-year contract worth $2 million.

As per The New York Times, Williams was fired after his racist comment about Muslims,

I mean, look, Bill, I’m not a bigot. You know the kind of books I’ve written about the civil rights movement in this country. But when I get on the plane, I got to tell you, if I see people who are in Muslim garb and I think, you know, they are identifying themselves first and foremost as Muslims, I get worried. I get nervous

A year after Juan’s termination, his spouse Susan told Newsmax that “the NPR people are hypocrites.” She further claimed most African-Americans are employed in low-level jobs at NPR.

Juan Williams & Wife Susan Delise Sons: Does He have a Daughter too?

The two have three children; two sons and a daughter. The couple welcomed their first child, a son named Antonio “Tony” Williams a year after their marriage in 1979.

Besides, Juan’s daughter Regan is married to Patrick Herald for years now. The couple had announced they were expecting their first child back in 2009.

Both their sons Antonio and Raffi are Devout Republicans

Their son Antonio is a republican. He spent a year from 1996 to 97 as an intern for GOP Senator Strom Thurmond. Later, he then worked for Republican Senator Norm Coleman as a speechwriter and legislative correspondent (2004-06).

He enrolled at Macalester College and earned a  B.A. in history, international relations, and philosophy. Furthermore, he also obtained a Master’s in journalism from the American University in 2006. Sources suggest that Tony currently serves as a senior director of government & external affairs at Comcast.

Their youngest son Raffi Williams too is a Republican. He graduated with an anthropology degree from Haverford College in 2011. Meanwhile, he also played lacrosse.

He also said in an interview with Yahoo News that his older brother played a major role in his political leanings.

Besides, Raffi is also leading a happy married life with his spouse Morgan Chalfant. As per sources, the two also have three children.

Susan and Juan are Proud Grandparents Too

The couple is not only father to three children but also grandparents. On the 4th of July, Juan made a Twitter post with his son and grandchildren. Check out the post here.

Happy #4thofJuly from our #ProudAmerican Family to Yours! @FoxNews pic.twitter.com/LMgtSTc2k7

Apparently, they have a great bond with their little ones as well.