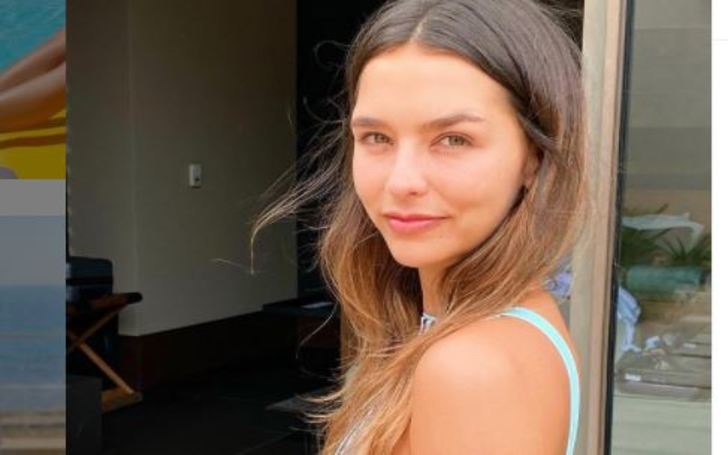 Juana Arias (Juanita Arias) is a Columbian TV and film actress known for Android Insurrection (2012), El Señor de los Cielos (2013), and Run Coyote Run (2017), Like You There Are Not Two, The Five Juanas, Narcos, Mexico, and The Spoiled.

She is also recognized for acting in How To Survive Being Single, Bastards y Diablos, and more recently in Netflix’s emerging hit series, The Five Juanas. Arias is quite famous among the internet community with her socials entertaining hundreds of thousands of followers.

Know all about the actor/model’s personal life as well as the professional beginnings all in the details below.

Juana Arias’ Mother Is A Journalist

Arias was born in Bogota, on May 6, 1989. She is the daughter of the renowned journalist Amparo Perez from Canal Caracol.

At ten Juana was already in front of the cameras being the face of several television commercials. She studied at Andean School in Bogotá.

As a youth, the Bogotá-born actress moved to the United States to study at the prestigious Lee Strasberg Academy of Acting, New York. The other notable alumni of the institution include Robert De Niro, Angelina Jolie, Alec Baldwin, Steve Buscemi, Matt Dillon, Bridget Fonda, and Scarlett Johansson, among others.

Juana Arias Career: She Was An Extra In Will Smith’s Men In Black

While being in the states, she appeared as an extra in the film Men in Black 3 starring Will Smith and Tommy Lee Jones. Additionally, she was also a crew member in series such as 30 Rock and Panama.

After returning to her home nation, Colombia, Arias joined the cast of the telenovela 5 viudas loose. That same year the Latino star appeared in the series Mamá Tambien and Mujeres al Limit. In 2013, Arias was among the casts of the film Dangerous Amores by Antonio Dorado Dangerous. In the film, she starred alongside Marlon Moreno and Kathy Sáenz.

The following year, Arias returned to the cinema with Demental, a horror film from the director, David Bohórquez.

After that, the Columbian actress began to split her time doing Mexican and Colombian projects; being part of the cast of series such as En otra piel (2014), Sincronía (2017), Las malcriadas (2017), and El Señor de los cielos (2018).

In 2018, Arias also portrayed Claudia in Netflix’s Narcos: Mexico. Two years later, she played Valeria in The Stars’ Like You There Are Not Two, and Juliet in Prime Video’s How To Survive Single.

In 2021, Juanita acted in HBO Latina’s The Girl Wiping. That year, she also gained wide fame for playing Juana Arias in Netflix’s mystery series, The Five Juanas. Arias is one of the leads in the series led by other famous telenovelas and Mexican TV names like Oka Giner, Zuria Vega, Renata Notni, and Sofia Engberg.

In an interview with El Comercio in June 2021, Arias revealed that she had fought a lot not to be pigeonholed.

She explained she learned to speak neutral for which she was able to make Mexican characters, as a housekeeper, or Julieta (How to survive single). All the characters were either super outgoing, relaxed girl, zero strawberry, or others, like Angela (La girl who cleans).

Juana said these traits were precisely what gave her the differential of being able to make a super-wide range of characters. Consequently, she has been on almost all platforms: Amazon, HBO, Fox Latam.

Lastly, she declared that she doesn’t want herself limited to a single platform or a single type of character.

Juana Arias Is Also An Influencer Promoting Her Own Brands

In addition to being an actress, Arias is also an influencer and an Instagram model.

She though says she never talks about what she eats, what she doesn’t, or what she drinks because the actress thinks they are things that could affect people a lot.

Arias believes as an influencer, one cannot say that they fast every day. The TV star reasons by doing so they are going to put the girl who follows them on a fast. “And that doesn’t help their body anyway,” explains the Five Juanas actress.

Does Juana Have A Boyfriend?

A few years back, Juanita was seen occasionally with her reported boyfriend Felipe Acosta. On her 25th birthday, Acosta had allegedly gifted his Columbian girlfriend a classic Cartier ring. Though as per then-sources, it wasn’t a proposal. The Girl Wiping star last shared a picture of her and Acosta on her Facebook in June 2014.

Then in 2018, in a q and a session, when asked “who is your boyfriend?” the brunette-haired actress had answered, Nico Perdomo. What’s intriguing is the fact that she hasn’t addressed the issue since. And nor has the couple ever been spotted together.

As of recent though, looking at her socials, Arias seems to be pretty much single.

While not in the paper, Juana is very much assumed to be a rich actress with her net worth supposedly in the frame of hundreds of thousands of dollars or even millions.

Having appeared in more than ten series with a career that has been active since 2012, Arias, as per reports, occasionally ranks among the highest earner in the Mexican television industry.

There’s also the actress’ modeling profile as well as her social media reach to consider while discussing her wealth.

Other Facts About Juana Arias