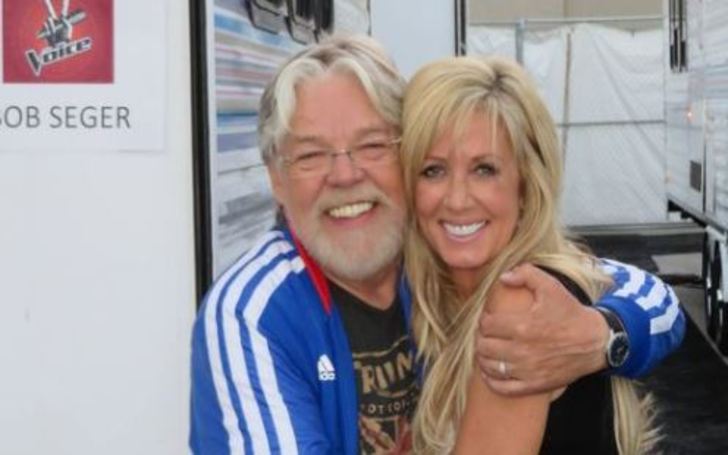 Juanita Dorricott is the wife of an American singer, songwriter, and musician, Bob Seger. The couple has been married for nearly three decades becoming the parents of two children in between.

It has been some time since Dorricott’s husband, Seger decided to end his touring career. Although Juanita is not the first person, with whom Bob walked down the aisle, she turned out to be “this is it” for the retired psychedelic vocalist.

So how the couple managed to turn a casual meet-up into a blissful ride that has been sailing ever so smoothly? Know all these along with some facts about the third wife of Bob Seger, Juanita Dorricott.

Juanita Dorricott Is From Ohio

Dorricott was born around the year 1964. She is also often referred to as Nita.

The youngest of five, the blue-eyed blonde-haired wife of Bob Seger was born in Kent, Ohio but moved to Troy, Michigan at the age of 10.

Dorricott once said her siblings as an adult began living across the country, and every summer they all meet on Mackinac Island.

“I love coming from a big family and am glad that my kids are close to their cousins,”

Juanita Dorricott And Her Husband, Bob Seger Are Together Since 1990

Dorricott married her husband, Seger on 10th July 1993 in a small private setting at The Village Club, in Bloomfield Hills, Michigan. Nita is 19 years junior to her vocalist husband.

Seger dedicated one of his songs, “You Take Me In” is to his longtime partner, Dorricott — a surprise she only found out after the album’s release. In fact, the singer admitted he kept it a secret from her for three years. One other song that the musician dedicated to his wife is “You Take Me In.” Additionally, “Are You,” took inspiration from the incident when Nita was shopping for children’s shoes over the Internet.

The blonde mother of two and her husband split their time between Orchard Lake Village, and West Bloomfield, Michigan. They previously used to live in Oakland County, Mich.

Prior to Dorricott, Seger was in a marital relationship with Renee Andrietti. They had married in 1968 but the union lasted for “one day short of a year”. Juanita’s husband then had a long-term relationship with Jan Dinsdale from 1972 until 1983. Then in 1987, he married actress Annette Sinclair but the two divorced a year later.

Juanita Dorricott Was Also In Another Relationship Before Meeting Bob Seger

The Ohio-born Juanita and Bob first met at the former Juke Box in Royal Oak around the year 1990.

While talking with My Digital in Sep 2019, Cole and Samantha’s mother revealed she met Bob through a mutual friend but she at the time was engaged to someone else.

Dorricott explained she was naive back then and not the star-struck type and hence at that moment she said she didn’t even realize who he was. She though managed to remember how Bob had told her a joke about country singers.

Juanita eventually called off her engagement and Bob swooped in to make a move. After a while, they became friends, fell in love, and fast forward to the present — are set to mark the 29th anniversary of their wedding.

Nita said she still has the napkin she wrote her phone number on.

As discussed, Dorricott’s longtime singer partner, Seger is a hard rock vocalist who became most successful on the national level with the album Live Bullet (1976) which went on to become a multiplatinum-selling. In 1976, Bob became a national breakout artist with the studio album Night Moves.

Started in the ’60s, Bob’s career has spanned over six decades, selling more than 75 million records worldwide, making Nita’s husband one of the world’s best-selling artists of all time. He was acknowledged in the Rock and Roll Hall of Fame in 2004 and the Songwriters Hall of Fame in 2012. The father of Dorricott’s two children was named Billboard’s 2015 Legend of Live honoree at the 12th annual Billboard Touring Conference & Awards.

In March 1987, Bob & the Silver Bullet Band (which Seger formed in 1974) received a star on the Hollywood Walk of Fame for their contributions to the music industry.

In Sep 2018, Bob Seger announced his final tour, the Travelin’ Man. At the time Seger also announced that while he may continue recording, Travelin’ Man was the end of his touring career.

Additionally, Nita’s husband provided further confirmation of his career end in June 2021, the month where he also lost his close friend and saxophonist Alto Reed.

An emotional Seger after the passing of his friend said he can’t imagine hitting the concert road again.

Dorricot’s Son Is A Filmmaker

Dorricott and Seger’s first child, Christopher Cole Seger is an award-winning film director and screenwriter who works at NRM Streamcast and Ten6ths Productions. He was into storytelling since his childhood. Cole studied English Literature at both Oakland University and Oakland Community College.

Dorricott and Bob’s one and only son briefly interned at the Oakland Press and various retail positions. He then attended the Motion Picture Institute of Michigan to study filmmaking. For his thesis film, “Carrying The Weight,” Cole received “Best Short Film Screenplay.”

Samantha, Nita’s daughter with Bob is a former student at Oakland University.

Juanita Was Married To A Navy In The Past

Before Bob, Dorricott was wife to the late US navy, Jack W. Dorricott. Her former husband, Jack died of Alzheimer’s disease on August 4, 2014. Dorricott’s ex-husband was born in Akron and attended the College of Wooster, UCLA, and Kent State University. The late former partner of Juanita was also a professor of law and had received his doctorate while teaching at Kent State.

It, however, is unclear what led Dorricott to divorce her ex-husband, Jack.

From the career that lived for nearly six decades, Dorricott’s Grammy-winning heartland rock husband, Bob Seger reportedly holds a net worth of over $60million. And considering the hundreds of tours, multiplatinum records, and more than dozens of albums, that should hardly be a surprise.

On the other hand, Seger’s wife, Juanita’s net worth is a whole different game of conjectures and theory especially when it is about approximating her wealth.

Some Additional Facts About Juanita Dorricott