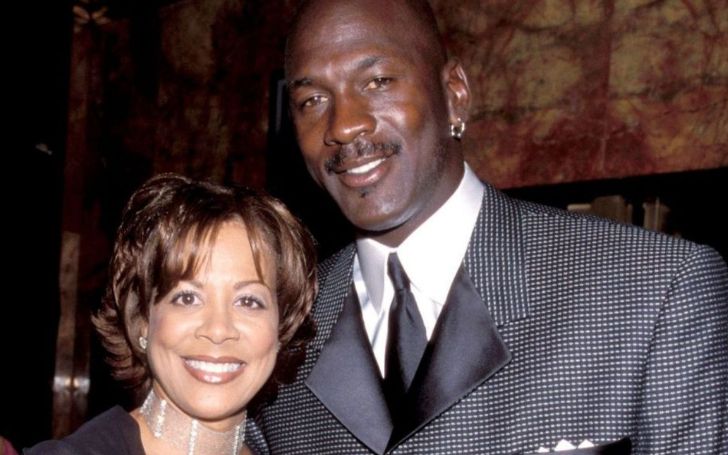 Juanita Vanoy is a former model and an executive secretary of the American Bar Association. However, she rose to prominence being the wife of former NBA basketball player Michael Jordan. Coming up to the year 2023, she has since been divorced with Michael as the couple separated mutually and amicably in the year 2006.

Talking more about her ex-husband Michael, he is a six-time NBA championship winner with Chicago Bulls and got worldwide appreciation as “one of the greatest basketball players of all time”. He is also the principal, owner, and chairman of the Charlotte Hornets of the NBA.

Being the ex-wife of such a renowned player, Juanita Vanoy, and her personal/professional life is a matter of curiosity to the people who follow Michael Jordan. So, today, we are here to address all your curiosity about Michael Jordan’s ex-wife along with her age, social media, her marriage and divorce with the NBA player, children, and many more.

When Was Juanita Vanoy Born? Her Age, And Early Life

Juanita was born to her father John Vanoy and her mother Dorothy L. Vanoy on 13 June 1959, in Chicago, Illinois. So, as of 2023, she is 63 years of age. Vanoy spent most of her early days in her hometown in Southside Chicago.

Similarly, she grew up in a family environment led by her lovely parents along with her five siblings Gwendolyn Hicks, Jacqueline Rogers, Rhonda Armstrong, Bernetta B. Vanoy, and Margaret Vanoy. For her academic degree, she attended Christian Fencer High School and further moved to American University for higher study.

Besides, Juanita comes from Cuban-African ethnicity and has American nationality.

In her professional career, Juanita, who captured the headlines after getting involved with former basketball player Jordan, did various jobs, Firstly, she started with modeling in her teenage years. Slowly, she began involving as a model for several projects and eventually landed in secretary job.

Likewise, she worked as an executive secretary for American Bar Association. Aside from the secretary post, she continued her modeling career. After her companionship with Michael, her then-husband, they together formed an organization named Michael and Jaunita Endowment Fund, to support charity programs. Following the charity works, the former American model also indulged in the real estate business.

Besides, she also worked at an advertising agency company, which is where she also met her former-husband for the first time.

Juanita Vanoy’s Relationship With Her Ex-Husband, Michael Jordan: How It Started?

Talking about their first meeting, well, there are two stories. Firstly, some reports claim they met in the year 1984 at Chicago Bennigan’s restaurant after she was introduced to Michael. Some days after their first meeting, the duo again met at a mutual friend’s party and they started seeing each other.

Meanwhile, an old magazine claimed they first met while Juanita was working at Burrell Advertising, an ad agency. Jordan was at the agency for his endorsement business.

Regardless, after dating for three years, Michael finally proposed to Juanita which resulted in their engagement. Unfortunately, the engagement was called off later. Subsequently, within one year, Jaunita became pregnant and as per some sources, Jordan hesitated to accept the unborn child that his girlfriend, Juanita, was carrying.

Whatever the speculation, the child was eventually revealed to be Jordan’s, and the duo decided to get married. At the time of their marriage, the couple already had a 10-months old son. In the presence of their beloved son, the couple shared their vows on September 2, 1989, at Little White Wedding Chapel in Las Vegas, Nevada. The former couple was on good terms until Vanoy filed for divorce in 2002.

Juanita Filed For Divorce Against Michael Two Times: What Had Happened?

The former American model, for the first time, asked for a divorce from her spouse in court in the year 2002, citing irreconcilable differences. However, she got back together with Michael after a while and withdrew the divorce petition.

Still, getting back together didn’t work out which is why she again filed for divorce and got separated legally on December 29, 2006. After the divorce, she received $168 million from her husband as a divorce settlement which at the time was considered the most expensive divorce settlement.

Did she re-marry? What about her ex-husband?

At the time when she filed for divorce, Juanita was already a mother of three children so, even after her separation from her children’s father, she didn’t wander to find love from another man instead she chose motherhood over anything.

On the contrary, her ex-partner Jordan got married to his long-time girlfriend, a Cuban-American model Yvette Prieto on April 27, 2013. The couple has twins together, Victoria and Ysabel.

An Illinois- born former model is a mother of three children Jeffrey Michael Jordan, Marcus Jordan, and Jasmine Michael Jordan. Her firstborn child Jeffery was born before his parent’s wedding on 18 November 1988.

Further, she became a mother for the second time by giving birth to Marcus on 24th December 1990. Similarly, on 7th December 1992, she welcomed her daughter Jasmine.

What Profession Did Her Children choose? More Into Their Life

Juanita Vanoy’s sons Jeffery and Marcus run a philanthropic foundation, Jordan Heir. Besides this, both of them is a former basketball players. Jeffery has played for the University of Illinois and the University of Central Florida. In May 2019, Jeffery tied the knot with his best friend Radina Aneva, He had proposed to Radina in 2018.

Moving further, Jasmine is already a mother of a child. She welcomed a baby boy in 2019 with former Syracuse basketball star Rakeem Christmas.

Despite being so an independent and fast-forward woman, Juanita prefers to live a low-key life. As a result, she does not have an Instagram account, and neither she is on Facebook.

But, the celebrity ex-wife joined Twitter in December 2012 under the username @TheRealJuanitaJ, where she has 157 followers.

She has been a former model and has worked as an executive secretary. In the divorce settlement, she took a great amount from her ex-husband. So, it can be said that she has quite a good lifestyle and has a fortune of $200 million, as per some sources.