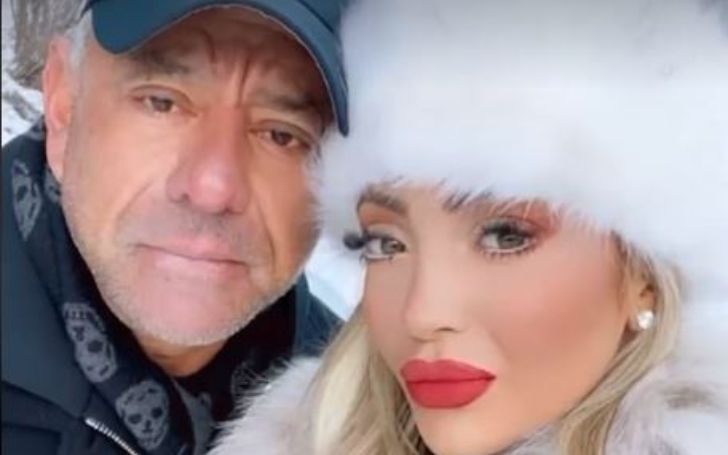 Chris Carlos is a Georgia-based wealthy investor who is a member of one of Atlanta’s most well-known and philanthropic families. He famously is a partner at Republic National Distributing Co, a company that is reportedly the second-largest distributor of premium wine and spirits in the US.

Carlos is also a philanthropist, supporting several local charities and nonprofits. Chris, in addition, is also a millionaire in his 50s, who has been running his family business for years.

Carlos further is known for his relationship with a much younger Instagram model, Juliana Carlos. In fact, a while ago, the couple entangled themselves in quite a headline that also included a famous name from the NBA. Read an all-out what’s what about Chris Carlos in the true tales beneath; his wealthy lineage, his life as a businessman, his political stance, his personal affair, and further.

Chris Carlos, The Native Of Atlanta, Is From A Well Off Family

The wine expert, Chris was born Chris G. Carlos in Aug 1965. The now 57 years old Carlos is a native of Atlanta.

Chris comes from a family of businessmen as his grandfather started a wine company called Dixie Wine back in 1935, later known as National Distributing Company.

The Carlos family also founded the Michael C Carlos Museum at Emory University and have donated millions of dollars to nonprofit organizations and charities. Juliana’s husband, Chris is the son of Michael C. Carlos, former Chairman and CEO of NDC, and Thalia N. Carlos.

His dad was the former chairman and CEO of NDC who passed away in December 2002 due to cancer. Chris likewise lost his mother in May 2011 due to a stroke.

The winery business proprietor, Chris graduated from Woodward Academy. Later on, he studied at the University of Floria and graduated with a bachelor’s degree in business administration.

As mentioned Chris Carlos is a partner at Republic National Distributing Co, RNDC, the second-largest distributor of premium wine and spirits in the US.

Chris built RNDC from NDC National Distributing Company; he is responsible for expanding NDC, his family’s business into South Carolina and further.

Presently, Republic National Distributing Company supplies wine and spirits in nearly two dozen states. It is only behind Miami-based Southern Glazer’s Wine and Spirits, which distributes in 35 states.

The University Of Florida graduate began his career in the winery as a merchandiser in Jacksonville, Florida. Carlos joined the National Distributing Company in 1985.

The ex-business student subsequently went on to gain a holistic understanding of the company’s operations as he worked in many of their facilities and the local business from the ground up. He eventually launched NDC’s beer division in Atlanta and served as the company’s Executive Vice President of Georgia.

Before RNDC, Carlos served on the Board of Directors for the March of Dimes and committees for organizations including Ronald McDonald House, Children’s Hospital, and Murphy’s Heart.

Carlos Is Also A Philanthropist

The first houses an art collection that includes a global collection of ancient objects. The museum received its name after Chris’s father. Carlos in addition is also a trustee of the Atlanta Ballet.

He once also won the “Philanthropist of the Year” by the Atlanta chapter of the Association of Fund-Raising Professionals.

Chris and his wife Juliana reportedly met in early 2019 on a date set up by their friends; a ‘blind double date’. They dated for about a year and announced their engagement in August 2020.

Juliana once posted a video where Carlos asks her to marry him during their vacation at the Four Seasons Resort Punta Mita in Mexico. The couple married over Christmas in 2020.

They now reportedly split their time between Atlanta and Florida. Juliana and Carlos have a significant age difference; the former is in her mid-20s while the latter is in his 50s. Chris’ wife, Juliana also has a YouTube channel where she posts makeup tutorials.

Before Juliana, Chris was husband to Merry Leigh Hodges and model Nicole Carlos respectively. What’s more, he also has three adult children from his first marriage to Merry, an entrepreneur.

And some of them allegedly have children of their own. Chris’ children with Merry often appear on his IG account with Juliana. Carlos’ second wife, Nicole Jockisch Carlos, on the other hand, is a former Hawaiian Tropic model. The two apparently also share a son.

Back in Feb 2021, Chris Carlos and his wife Juliana had to leave a basketball game midway after they shouted at LA Lakers star, LeBron James. After the incident, Carlos’ wife took to Instagram to complain about how the security and the officials removed them from VIP seats.

Carlos and Juliana were at the Hawks-Lakers game on Monday night. The couple was watching the game when Carlos’ spouse allegedly claimed LeBron James started an altercation with her husband Chris.

Juliana knew they were allegedly insulting one another. She then stood up to defend her husband from the basketball star. The security and ushers, however, quickly stopped them and asked them to leave.

Juliana later took to Instagram to discuss the altercation. On Insta, she said how her husband Chris had been watching the games for 10 years and possibly had issues with LeBron. She though insisted she didn’t have any issue with the shooting guard.

Juliana explained she only fought with LeBron because she thought the Lakers no 6 was saying something to Chris. Mrs. Carlos claimed after she confronted the Ohio-born basketball player, he told her, ‘Sit the f–k down, b**.’ Security footage later, however, showed LeBron using no such words.

Though, in a clip of the incident, one can see James calling Chris Carlos “ol’ steroid ass”, reports The Athletic. Also after the game and the Carlos couple incident, the NBA Champion took to Twitter to address the clip, writing: “Courtside Karen was MAD MAD!!”

Later, the same month in February, Juliana addressing what had happened at the game posted an apology on her Instagram story. Explaining her behavior, Carlos’ wife through her Ig story stated,

“To say things escalated quickly at yesterday’s game is an understatement, and I want to apologize for losing my cool and removing my mask in the heat of the moment.”

She added what should have been a quick back-and-forth between two adults got out of hand and her natural instinct to stand up for the man she love kicked in.

Further in the message, Juliana Carlos, while admitted to getting defensive and using offensive language, she said she was willing to take full responsibility. As for James, he claimed he and Chris had been having words during the game but he later said Carlos “went a little bit out of bounds.”

The four-time NBA champion and four-time MVP also downplayed the incident. He said the fans didn’t deserve to leave during the game and blamed alcohol for their behavior.

Chris Carlos Has Not Liked LeBron James From The Beginning; He Once Dissed Him Through His Locked Out Instagram

As such Chris, after the Feb 2021 incident, posted some images on his now-private Instagram page showing him sitting behind the basketball player during a 2017 game.

In another post from the same game, Chris said LeBron ‘almost sat his big ass on his wallet and phone.’ In the past, LeBron, too, had called out Chris for his political donations to Republican interests.

The Atlanta-born NDC heir had also targeted ex-President Obama online. In 2016 Chris had shared an offensive meme where he wrote, ‘He could go down as the worst president in the history of this country.’

Juliana and Chris’ 2021 incident wasn’t the first time the wine merchant and his partner disturbed the basketball court.

Chris apparently is a strong supporter of the Republican party. He once donated thousands of dollars to Republican David Perdue in the Georgia Senate race, along with other Republicans.

Though Perdue couldn’t secure the victory. Even between 2014 and the present, Carlos has donated nearly $30,000 to Purdue’s campaigns, including more than half of that amount being spent (in vain) on the most recent election cycle.

According to the website, Open Secrets, Chris has also forked out the cash to the likes of Donald Trump, Rudy Giuliani, and many other Republican officials and organizations.

Chris likewise has also given many thousands of dollars to the Republican National Committee, donating up to $2,800 with each contribution. On the other hand, there were also instances where Chris donated to Democrats; they, however, are a few too many.

This includes his one-time contribution of $500 to John Lewis back in 2008 and more than $5,000 in two separate donations to Chuck Schumer, a Democrat, and the current Senate Majority Leader. Per other sources, Chris’ family, too, has donated around $10 million to the political objectives.

How Rich Is Chris Carlos; His Net Worth And Other Likewise Details

Chris Carlos is substantially rich; a guy who really has deep pockets. The longtime employee at his family’s business in Georgia has a reported whopping net worth of $80 million.

He was born with a financial security blanket that has afforded him the ability to donate liberally to what appear to be mostly conservative political interests. Further, he and his wife, Juliana reside in a $25 million Miami penthouse.

The RNDC co-owner also has several properties across the states. Worth mentioning is he is a partner at Republic National Distributing Company, the second-largest alcohol distributor of wine and spirits in the United States. It reportedly generates nearly $11 billion in revenue.

To perhaps give a better idea of Carlos’ extravagance, the New York Times featured him in an article from 2007 about Georgia households that wastewater. The Times labeled him back then as “a wealthy investor who is a member of one of Atlanta’s most well known and philanthropic families.” He allegedly used 440,000 gallons of water in a single month in the middle of a drought.