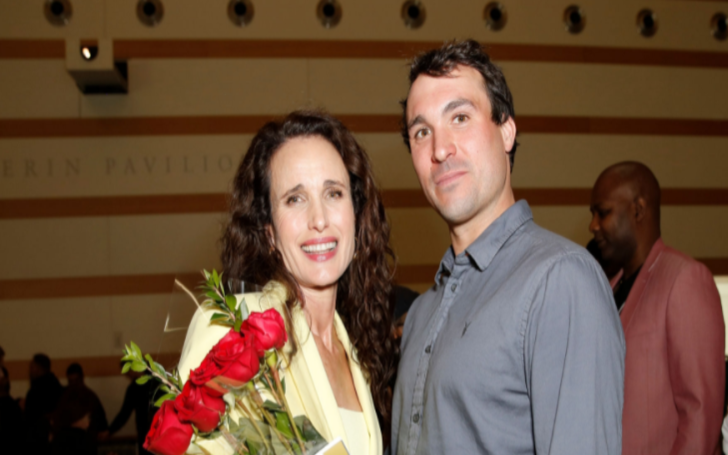 Justin Qualley is the son of actress, Andie McDowell and her ex-husband, Paul Qualley. He is the eldest of his parents’ three children. Justin’s mother, MacDowell is best known for her roles in iconic ’80s and ’90s movies, like St. Elmo’s Fire, Sex, Lies, and Videotape, Groundhog Day, and Four Weddings and a Funeral. Justin is an offspring of the past generation of A-listers. His sisters have been taking a page from their mother’s book.

But is Qualley, himself into the acting business. While we may have heard a lot about the Qualley sisters, Justin’s the one who’s been mysteriously out of the public’s eye.

So let’s know what Justin’s into; professionally as well as personally.

Justin Qualley was born on August 14, 1986. His maternal grandmother Pauline “Paula” Johnston (née Oswald), was a music teacher, while his grandfather, Marion St. Pierre MacDowell, was a lumber executive.

His ancestry includes English, French, Scottish, Irish, and Welsh. Justin’s actress mother, McDowell’s family owned an antebellum period summer house in Arden, North Carolina, which has since been made into a bed-and-breakfast named the Blake House Inn.

From his father’s side, Justin supposedly is of Norwegian descent. Qualley’s grandmother, also McDowell’s mother suffered from a nervous breakdown and had to have shock treatments. She was also often stigmatized for her condition. Because of this, she went on to find solace in alcohol.


Justin Qualley’s Mother, Andie McDowell Was Struggling Amidst His Birth

On the occasion of his 35th birthday, Justin’s mother narrated what life was like when she found out that she was pregnant with Justin Qualley. Penning a rather long tribute to her son through her Instagram, McDowell said it was really hard for her to fathom that her son was 35. The Groundhog day actress shared how Justin’s arrival changed everything about who she was because she no longer cared about anything but him.

The Golden Globe nominee revealed she was living in New York, modeling, and trying really hard to make it in the acting business. She, then, 27, was somewhat struggling when she found Justin was growing up in her belly.

McDowell, nonetheless, mentioned the news was the greatest blessing of her life. She also explained how at the time, in her business she was young to be making such decisions. McDowell, however, made being a mother, her first priority. She didn’t want to have a career at the cost of not having the opportunity to have a family.

Justin’s mother further added that this was back in the days when society called women as if they were being greedy to want to be able to have a career and have children.

His Mother is An Hollywood A-Lister

Justin Qualley’s mother, Andie McDowell is a famous name in the American film industry. Making her debut in 1984’s Greystoke: The Legend of Tarzan, Lord of the Apes, McDowell gained critical acclaim for her role in Sex, Lies, and Videotape (1989), for which she won Independent Spirit Award for Best Female Lead. She also received a nomination for a Golden Globe Award for Best Actress – Motion Picture Drama.

Qualley’s mother bagged further Golden Globe nominations for her performances in Green Card (1990) and Four Weddings and a Funeral (1994).

She has also modeled for Calvin Klein Inc. and has been a spokeswoman for L’Oréal since 1986, celebrating 30 years with the company in 2016.

Justin’s younger sister and McDowell’s youngest child, Margaret Qualley (fully, Sarah Margaret Qualley) trained as a ballerina in her youth and briefly pursued a career in modeling. Margaret was born in 1994. Also a model and actress, she has become a model for New York Fashion Week, Paris Fashion Week, and numerous magazines.

Qualley made her acting debut with a minor role in the 2013 drama film Palo Alto. She gained recognition for playing a troubled teenager in the HBO drama series The Leftovers (2014–2017). Margaret then appeared in the dark comedy The Nice Guys (2016) and in Netflix’s supernatural thriller Death Note (2017).

Justin’s sister, Qualley gained wide acclaim after she received a nomination for a Primetime Emmy Award for portraying actress and dancer Ann Reinking in the FX biographical drama miniseries Fosse/Verdon (2019). Her biggest commercial success came in 2019 when she starred in Quentin Tarantino’s comedy-drama Once Upon a Time in Hollywood appearing alongside Brad Pitt, Leonardo Dicaprio, and Margot Robbie.

Qualley’s sister and the middle of McDowell’s three children, Rainey Qualley is also an actress and singer. She made her acting debut in the film Mighty Fine (2012). Justin is 4 years older than his sister Rainey who was born in 1990. She is Miss Golden Globe of 2012.

Rainey is mostly known for releasing and writing music under the name Rainsford. She has also made appearances in Mad Men and Love In The Time Of Corona. Her other film credits include Ocean’s 8, Perfect, and Falcon Song.

Justin’s parents met while Paul was posing as a model for GAP ads services. They remained together for 13 years during which they produced three children including Justin. His father used to be a rancher.

Andie and Paul divorced in 1999. The family had just uprooted to Carolina from Montana.

Justin’s mother then married businessman, Rhett Hartzog on November 10, 2001.  She, however, parted ways with him in October 2004.

How Is Justin Qualley Behind The Doors?

Justin’s mother has on several occasions described him as someone who is an extremely down-to-earth type of guy. Andie has mentioned her son, Justin loves having a quiet life. She says she has so much respect for him and his choices.

Justin apparently loves trees and nature and believes in preserving open lands for wildlife. His mother sees him as kind, joyful, peaceful, and someone who is beloved to his friends.

He allegedly works in real estate in Missoula, Montana, where his father, Paul Qualley maintains a ranch, reported NY Times, 2018.