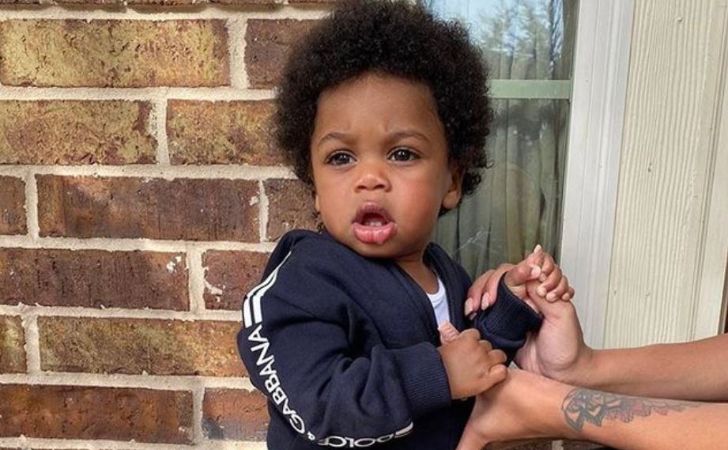 Kacey Alexander Gaulden is one of the seven children of American rapper & singer NBA YoungBoy. He is the fifth child of the rapper. Born from YoungBoy’s relationship with Jania Meshell, aka Jania Bania, Kacey shares a great relationship with both his father and mother.

Well, Kacey is just a 2-year-old kid and is already hugely famous across social media. And in this article, we will reveal some interesting details about the little kid including his brothers and more…

How old is Kacey Alexander Gaulden? He is NBA YoungBoy and Jania Meshell’s Son

His age is 2 as of 2021. Kacey Alexander Gaulden was born on February 13, 2019, in Louisiana, United States. He is the fifth son of rapper NBA YoungBoy Never Broke Again. He was born from his father’s relationship with Jania Meshell.

Well, the interesting thing is that Jania gave birth and raised Kacey as a single mother. She had initially announced her pregnancy with Kacey following her break up with her boyfriend NBA.

Kacey’s Parents Had an Abusive Relationship

Alexander’s dad YoungBoy and his mother Jania are no more together. Before their break up, they reportedly had an abusive relationship. In fact, back in February 2018, NBA was even arrested for assaulting and kidnapping his ex-girlfriend Jania.

In one of the video clips released by TMZ just before his arrest, YoungBoy can be seen hitting Jania and trying to drag her into the hotel room in Waycross, Georgia. Following the incident, the former couple was involved in a filthy divorce and they were not even allowed to interact all the while during their proceeding.

The case was finalized in December 2019 and YoungBoy was ordered to spend 12-months on probation and a penalty of $1,500.

Later, after Jania announced her pregnancy, YoungBoy talked about his relationship with her on one of his Instagram lives. There the artist stated that he had never hit her.

But, as of now, the former flames share a close relationship with each other.

His Mother Raised Him As a Singer Mother

Jania announced her pregnancy with Kacey soon after her split with her then-boyfriend NBA. Thus, following the birth of Kacey, she had to raise him as a single mother.

On the other hand, NBA who was undergoing assault charges was not allowed to meet Jania and only his son. At present, Jania and Kacey share a great relationship. The two are often seen together on Jania’s Instagram which is pretty suggestive of their bonding as a mother and son.

The mother of Kacey, Jania Meshell is a successful model and a social media influencer. She is primarily famous as an Instagram model and has a huge following on the platform.

In addition to her social media career, Jania runs a YouTube channel, where most of her posts are about fashion. She also gives advice on health and fitness via her channel. Not only this, but the Instagrammer also makes Q&As videos, pranks, and daily vlogs on her channel.

Along with being a successful model and a social media influencer, Jania is also a businessperson. She recently launched a fashion company named “JaniaMeshell Lashes.”

Her brand primarily sells eyelashes and also focuses on makeup products for the eyes. Well, needless to say, she has been doing pretty well as a businessperson.

To all those who were unaware, Kacey is not the only child in his family. He has six other siblings, four brothers, and two sisters, who are born from his father’s multiple relationships. His siblings are Taylin, Kamari, Kodi Capri, Kayden, Kamron. Kacey’s younger brother named Kentrell Gaulden Jr. was born in January 2021, from his dad’s relationship with Floyd Mayweather’s daughter Iyanna Mayweather.

The star kid shares a great relationship with all his siblings and also makes an appearance with them on his parent’s social media posts.

His father YoungBoy, a budding artist has an estimated net worth of $11.9 million in 2021. He has earned the majority of his wealth from his burgeoning career as a rapper.

Beginning his musical career in 2015, Gaulden already released six independent mixtapes until 2017 and all of them also went cult hit.

On the other hand, Kacey Alexander Gaulden’s mother has racked a good amount of money from her successful social media career. Her net worth is $1 million as of 2021.