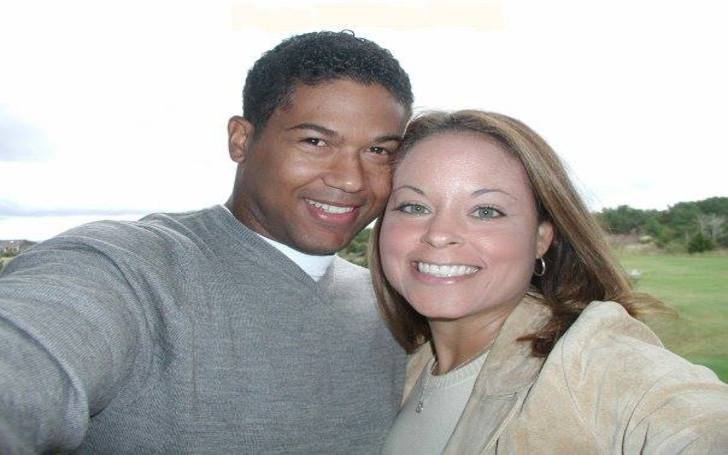 Kari Hillsman is the ex-partner of Canadian-Bahamian former basketball player, Rick Fox. Hillsman’s former boyfriend, Fox is also an actor, businessman, and once owned an esports franchise. Rick majorly played for the Boston Celtics and Los Angeles Lakers of the NBA.

Hillsman and Fox’s relationship dates back to their college days. They had a son who is all grown up now and making a name for himself in sports.

While Fox and his son with Kari, have managed to remain within the reach of media, Hillsman has become a thing of the past. Oftentimes, she is just a matter of “whatever happened to the ex of Fox”. So where exactly is she now? Has she moved on post her separation with the NBA star? Know the answers in the content below.

Who Is Kari Hillsman?

Besides being famous as the ex-partner of an NBA legend, Hillsman is now a wife and mother of three kids. Professionally, she is an accredited residential manager at the Institute of Real Estate Management (IREM). She’s been with the company since March 2014.

Not much about her early life is known though she supposedly is Massachusetts-born (Boston). The daughter of a black father and white mother, Kari was born on the 16th day of January (most probably in 1971, from Hillsman, herself). Hillsman studied at The University of Massachusetts Boston.

Her father, AC Hillsman Jr who was in the army lost his life to cancer on Christmas Day, 2003. Kari’s mother, Mary Hillsman is a native of Andover, Massachusetts and presently lives in Nokomis, Florida. Mary went to Andover High School and studied at Lowell General Hospital School of Nursing. Hillsman’s mother used to work at Massachusetts Mental Health Center.

Kari Hillsman And Rick Fox Were Together Since College

As mentioned she had a famous relationship with a former Boston Celtics and Los Angeles Lakers player, Rick Fox. The former couple allegedly started dating in college. Kari was still there when he made it through the draft and also during most part of the time Fox played for the Celtics.

They had a son, Kyle. Due to the demands of Rick’s job as a professional basketball player, distance started to set them apart. Hillsman raised her son on the East Coast while Rick became busy playing for the Lakers in the west.

This even brought distance between Kyle and Rick. It wasn’t until Kyle’s move to LA to study at Loyola Marymount that the father and son got to spend more time together. It is unclear when Hillsman and the Lakers’ no 17 separated, rumors, however, have it that their relationship ended in the late 90s, presumably in 1997.

The former girlfriend of Fox, Kari Hillsman is married and has moved on well since ending her relationship with her athlete boyfriend.

Hillsman, currently, is the wife of Henry Francillon. Her husband, Francillon is a huge soccer fan as well as a golf fanatic. The couple married on December 17, 2003.

With Henry, Hillsman has two children, a boy, and a girl. Her daughter Kayla Francillon played soccer in the Junior Varsity team of Malden Catholic High School, Massachusetts.

Hillsman and Fox’s son Kyle is a video game star and streams live on Twitch. He is a Community Manager for Echo Fox, an esports team.

Growing up, Kyle developed a fascination for Nintendo games and aspired to make games of his own since his childhood days. Rick, to help his son fulfill his son’s goal, took his son to the offices of Riot Games, the company behind League of Legends, for a job interview. Hillsman’s son got the position and that’s how he started his journey as a gamer.

Rick admits his son, Kyle was a primary factor in him investing and developing a thing in esports. He even bought electronic sports aka eSports team of his own. Further, the three-time NBA Champion believes that “video games help heal a lot of parent-child relationships.”

When Kyle was a little boy, he often got to connect with his distant father, through the clouds, by playing games like World of Warcraft.

After his relationship ended with Hillsman, Fox began dating actress/singer and Miss America 1984, Vanessa Williams. They met through supermodel, Tyra Banks. Ironically, Fox was at the time dating Banks.

Williams and Fox married in the summer of 1999 in the Caribbean.

In addition, they had another ceremony in September 1999 in New York City. Hillsman’s ex and Williams then welcomed a daughter, Sasha Gabriella Fox in May 2000. Four years after the marriage, in August 2004, Fox filed for divorce from Williams. Several years later, they decided to develop amicable terms as the two had committed to working together on the television show Ugly Betty.

After splitting up with Williams, Fox dated the Basic Instinct actress Sharon Stone from 2006 to 2007. The E-sports franchise owner then started going out with Sex and The City star, Kristin Davis. They, however, broke up in 2008.

The next Hollywood star in the life of Hillsman’s ex was from the fame of Buffy the Vampire Slayer, Eliza Dushku. In 2010, the former NBA star and Dushku even admitted to living together. This relationship between Fox and the Bring It On actress didn’t last long either; the two called it off in 2014. Apparently, the reason behind their breakup was turned out to be their preference to live in separate places.

After Dushku, people started seeing Fox hanging out with AnnaLynne McCord (90210). Tabloids first caught them together on January 30, 2015, at a pre-Super Bowl event hosted in Arizona. In the event, McCord allegedly referred to Hillsman’s former partner as her ‘boyfriend.’

However, the confirmation to that end never came. Then in May 2015, Kari’s ex made headlines after people saw him with TV star, Khloe Kardashian at a Mexican restaurant in Los Angeles. When asked if they were dating, Fox responded, “Khloé’s a good friend.”

The Time When Kari Hillsman Got Unusual Thing From A Fan Of Her Ex-Boyfriend; Police Thought It Was Drug

In April 1993, Deseret reported an incident from the locker room of the Celtics that involved Hillsman, her former boyfriend, and even the authorities. A Boston Celtics fan’s apparently wanted to show appreciation and get access to the players for autographs; especially, to then Boston’s forward, Rick Fox.

According to then reports in Boston newspapers, an unidentified season-ticket holder whose seat was near those of the wives and girlfriends of Celtics players, offered Fox’s girlfriend, Kari Hillsman, a container. Police later suspected the substance to be a drug.

The motive behind it was to get access to the Boston Garden locker room area so that the man could get autographs of the players. Fox, who was then dating Hillsman, told the Boston Herald he confronted the man though there wasn’t a fight. He reported how he told the man that he had never associated himself with such kind of thing and said he was upset with what happened.

Fox said after he confronted the man, he was very shocked. After that, he apologized and explained he was just trying to be appreciative.

It remains a mystery to this day what really was the substance. The Boston Globe then reported Hillsman had described it as a “suspicious green substance.” Fox’s then-girlfriend thought it was marijuana. The man reportedly offered her a “substance suspected to be a drug in a vial.”