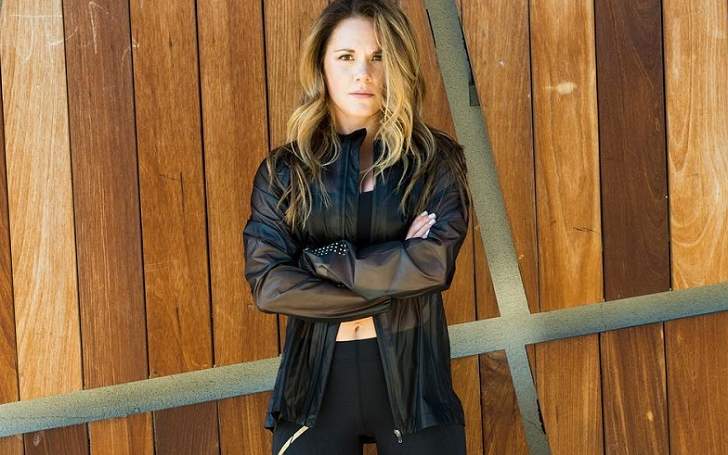 Katy Kellner is a fitness coach who gained wide attention as the ex-fiancee of Shannon Sharpe, a former football tight end. Shannon is currently a TV presenter and serves as a co-host for Skip and Shannon: Undisputed.

The former couple was in a committed relationship for several years before going their separate ways. Now you must be wondering, why did the formidable duo break up? Today you’re going to find out and let us warn you, you’re in for a shock!.

Besides, at the moment, Kellner works as the co-owner of CycleBar Thousand Oaks with her new boyfriend. Well, here we will try to explore more hidden facts about her life.

Katy Kellner Relationship with Shannon Sharpe: How did they first meet?

Katy met her former boyfriend, Shannon, at a local gym. As both of them are fitness enthusiasts their common interest played a major role in their initial bonding. Kellner maintained,

“Working out is a passion for Shannon and me. In fact, our romance began in a gym.”

In the meantime, Shannon worked as a commentator at the CBS Sports pregame show The NFL Today while Katy was a teacher. Despite their busy schedule, the couple always managed time for each other. They regularly attended Flywheel Sports spin tutorials together.

Katy said the daily fitness training they did together was one of the major factors that brought more positivity in their relationship.

“Fitness has had a positive effect on our relationship because it is a common interest that we both feel very passionate about. We work out together, and that allows us to spend much more quality time together.”

Kellner and Sharpe started appearing together since the early 2010s and made a few public displays. For the first time, the duo was seen at the 2nd Annual Style Icon VIP Luxury Lounge And Gifting Suite in Indianapolis, Indiana in early 2012. Stand-up comedian, Mike Epps also appeared in the event

They attended the New Era Style Lounge, in yearly 2016, in San Francisco, California.

The couple dated for several years before Shannon popped the big question in 2016. After the two got engaged, Katy wrote “fiancé to #84” on her Twitter bio which is Sharpe’s old jersey number.

At the time, it looked like they were almost on the verge of the next big step. The pair had even moved in together. She lived in Atlanta with her fiance and their three puppies Tarzan, Pomeranians Tazz, Tarzan, and Bull Mastiff Tonka.

However, Kellner never had the fortune of becoming Sharpe’s wife.

What is the Reason for Their Separation? Another Black Guy Impregnated Katy

Reportedly, Katy and Shannon broke up after Katy got pregnant by Marlon Byrd, a former professional baseball outfielder.

Initially, everyone was thinking that Shannon is the baby’s dad. But a photo shared by Katy shocked us all. In the picture, Kelly is showing her baby bump with her boyfriend Marlon.

The new lovebirds welcomed their first child, a son, Jaden in 2018. Byrd frequently shares adorable pictures with his baby boy on his social media while Katy has kept her social media handles private.

Are Katy and Byrd still together? They run a CycleBar Thousand Oaks

The loving couple is still leading a blissful love affair. They run their own company, CycleBar Thousand Oaks, in California. Kellner is responsible for recruiting, training, and overseeing the instructor team at the studio. She often performs quality control checks.

She also aided in training boot camps for new studio openings around the country and also worked with the Senior Master Instructor team.

The fitness trainer is a proud father of two kids, a son, and a daughter. He calls them Gi and MJ. However, the information of their biological mother is yet to be revealed.

In March 2013, the accomplished fitness guru joined Flywheel Sports as a studio manager. She held the position until November 2014. She used to sell membership opportunities to new customers.

Kellner was later promoted to the position of regional manager and provided the highest level of customer service to the community. She also worked as a Regional Director of the Southeast for nine months and Managing Creative Lead for three months, supervising a 40 person team consisting of both Flywheel and FlyBarre instructors.

Was a Teacher at Fulton country Public Schools

Katy spent nearly a decade working as a tutor at the Fulton country Public Schools (from June 2003-Feb 2013). She maintained a healthy relationship with fellow teaching staff, administrators, parents, and students.

Kellner also helped her pupils in their emotional, social, and academic development.

The health freak is gluten, sugar, dairy, and processed food free. She usually has scrambled egg whites and grape tomatoes for her breakfast. She generally takes 4 oz of chicken breast and raw veggies for her lunch and dinner.

Her preferred snacks are fruit, turkey breast, and raw cashews or almonds.

Where is Katy Klenner From? Graduated from Troy University

Klenner was born in the United States of America. She is an American as per her nationality and belongs to Caucasian ethnicity. She has kept her family details behind the close doors.

Katy attended Elmhurst College, in Elmhurst, Illinois in 2000 and graduated with a Bachelor of Arts in 2003.

Katy then went on to enroll at Troy Univesity, in Troy, Alabama. She earned a Master’s degree in instructional technology from the college.

Katy Klenner has earned a good fortune from a career as a fitness trainer. As per sources, her net worth is $300,000 in 2020. She is also paid a high salary as a fitness coach.

Rumors of Shannon Sharpe Wife: Is He Married to Katy Kellner?