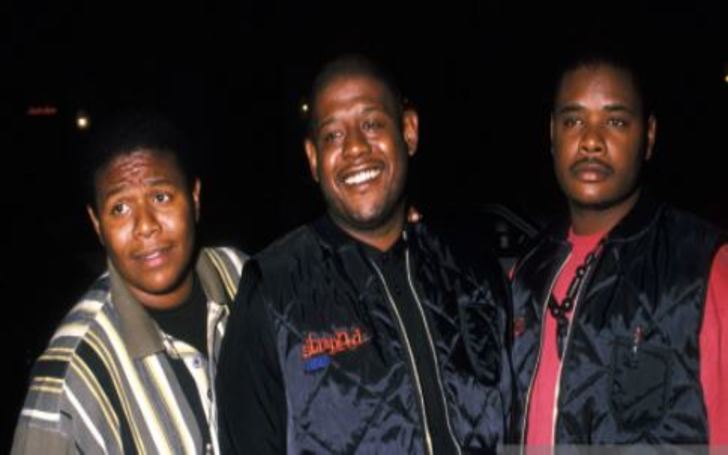 Kenn Whitaker, fully Kenneth Dwayne Whitaker, is the younger brother of actor, producer, director, and activist, Forest Whitaker. By profession, Kenn is an actor known for films like Most Wanted, & Life, and many others.

His brother Forest is an actor with many hit movies and accolades to his name including an Oscar for the best actor. The article below, however, is all about the younger Whitaker, Kenn.

Read all about his off and on the camera life; whether he has a wife and family or is he a completely forgotten star.

Kenn Whitaker Is A Texan

Kenn was born on June 8 1963 in Longview, Texas. He is the son of his father Laura Francis (née Smith), a special education teacher. His mother put herself through college and earned two master’s degrees while raising Kenn and his siblings.

Kenn’s father, Forest E. Whitaker Jr. was an insurance salesman. When he was in elementary school, Kenn’s family moved to Carson, California.

He grew up alongside his brothers and cousin, sharing a bed with them. The cousin later went into the army in 1968.

When his actor-brother in the late 2000s took a DNA test, the results showed their mother had Akan ancestry. On the other hand, Kenn’s father was of Igbo descent.

Additionally, it revealed the Whitaker brothers’ ancestors hailed from Ghana.

Kenn Whitaker has two brothers, the famous one being Forest who is also older than him. The next one is Damon Whitaker. The three brothers have an older sister, Deborah.

Damon is known for films like Haphazard, The Tell-Tale Heart, The Champagne Game, and The Lazarus Papers, among others.

As mentioned he made his acting debut in the 1997 film, Most Wanted. In the film starring Voight and Wayans, Whitaker portrayed the role of Bus Guard 2. The following year, the brother of the Oscar winner, Kenn went on to have a cameo in HBO’s sketch comedy series, Tracey Takes On appearing as a second smoking man in an episode titled Smoking.

In 1999 he got to cameo once again though in the series, Party Of Five from the network Fox. In the show featuring Scott Wolf and Neve Campbell as the leads, Kenn played the role of a detention Center Guard for the episode, Whatever Works.

Forest’s brother would have one more acting credit before the end of the year 1999 in the buddy comedy-drama film Life from the director, Ted Demme. The film presents Kenn in the role of Isaac alongside stars like Murphy, Lawrence, Bernie Mac, and Bookeen Woodbine.

Kenn’s last role was in the movie, Last Days released the same year as Theory Of The Leisure Class.

Did His Brother Forest Whitaker Lose His Eye?

Kenn’s famous brother, Forest’s intriguing left eye has been a subject of curiosity amongst film-goers for many years.

While on one hand, some believe it is something of a physical deformity, on the other hand, there are many who perceive the actor has really lost his one eye.

It, though, in reality, is a benign ocular condition that can cause the upper eyelids to sag. The term is Ptosis or “drooping eye”

Critics cite Kenn’s older brother has rather used the eye condition to his advantage, allowing it to give more depth to the characters that he portrays.

The elder Whitaker nevertheless himself has said that he considered corrective surgery. He explains it, however, was not for cosmetic reasons but because his ptosis sometimes blocks his field of vision in his left eye.

Does Kenn Whitaker Have A Twin Brother?

Considering the exceedingly covert personal aspect of Forest’s brother, the in-depth family structure of the Most Wanted is anything but a clear picture.

While the Whitaker brothers are to some extent similar to each other when it comes to appearances, not any two of the three, however, are twins. In fact, people relate Kenn and his other brother Damon to Forest to such a degree that some believe their names are almost made up and that they do not even exist in real life.

The truth is though Kenn and Damon are categorically real. And the fact that the three brothers were born at different times does make it pretty clear that they did not overlap each other’s due dates.

Is Kenn As Rich As His Brother Forest?

Kenn’s big brother is undoubtedly a millionaire. He has been active in Hollywood since the ’80s with two of his movies grossing more than a billion dollars at the box office. He is still the most recognizable black actor in the North American film industry.

Conversely, though Kenn while a notable face nonetheless lacks all the aforesaid commendations to a good extent. In fact, it has been over two decades since he last appeared on a silver screen. Additionally, his professional pursuits since then have never been disclosed either. Accordingly, it’s up to anyone’s guess what his net worth is.

Does Kenn Whitaker Have A Wife?

Having discussed his utmost concealed life, it should go without saying Kenn’s married life simply isn’t on the discussion of any tabloids either bygone or the upcoming ones. Further, even his brother, Forest has managed to keep the personal affairs of his family in the mist.

While the Last King Of Scotland star recently divorced his wife of 22 years, Keisha Whitaker, also an actress, so far, the outlets haven’t talked about Kenn in the same spectrum (his wife or girlfriend or even his family).

Kenn, when he was 25 owned a record company, Urban Street.