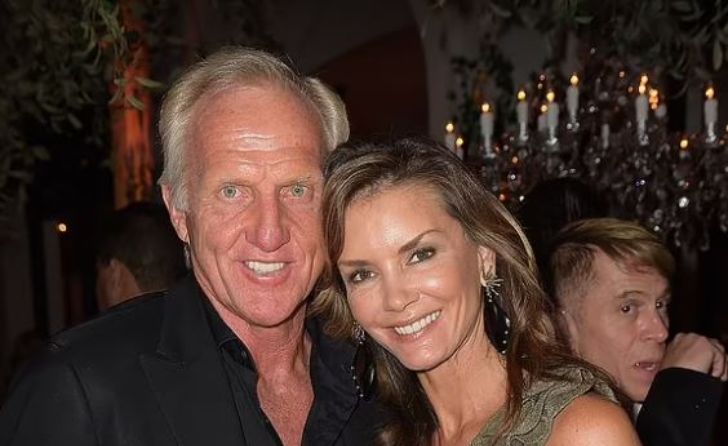 Kirsten Kutner is an interior designer who is better known as the wife of Greg Norman an Australian entrepreneur and retired professional golfer who spent 331 weeks as the world’s Number 1 Official World Golf Rankings ranked golfer in the 1980s and 1990s. Kutner is also the wife of a man who won 89 professional tournaments, including 20 PGA Tour tournaments and two majors: The Open Championships in 1986 and 1993.

Know more about her in the ensuing headings; scroll through her upbringing, her current life, her relationship with Greg to what the couple is doing in the present.

Kirsten Kutner Is Partly Filipino; Grew Up Mostly In Australia

Kirsten Kutner, the interior designer wife of Greg Norman was born in May 1968. The current Ms. Norman grew up in Sydney’s northern suburbs and has lived in Bangkok and the US.

She is of German/ Filipino descent and has been a world traveler since childhood. Kutner’s mother, Margaret, and aunt, Geraldine, are from the Philippines. She also has a younger sister.

The now 53-year-old once revealed she has been designing in the five-star hospitality industry for more than twenty years. Kirsten also says she has been collecting inspiration and ideas from her extensive and exotic journeys. Throughout her life, she has traveled across the globe living in countries such as Thailand, Germany, Australia, Hong Kong, the USA, Switzerland, and the UK.

Kutner is currently the founder of Norman Design Group.

Nationality-wise, Kirsten certainly could be an Australian in that she is the legal wife of one of the country’s most prominent stars. Though whether she was born in the Oceania territory or not is quite a mystery.

Further, since she traveled a lot across the globe, it is as much hard to say if she is an Australian by birth.

Kirsten married the former world no 1, Norman on Sunday, Nov 2010 at a secret Caribbean ceremony in the Necker Island, the British Virgin Island isle of billionaire Richard Branson.

It was the third for Greg and the second for Kutner. Norman sometime after the wedding said it was a barefoot beach ceremony on a private island with a small gathering of family and friends.

The Queensland-born golfer told New Idea magazine that everyone was barefoot and dressed in white. During the time of their marriage, the World Golf Hall Of Fame talking about his wife said,

“To me, she is the most beautiful woman in the world. She looked stunning.”

As for his wife, Kirsten, the designer said, “I feel very proud to be by Greg’s side, to take his name and to support him in every way I can.”

Kutner, an interior designer, called Norman “the big love of my life” and said she was “definitely the luckiest woman on this earth.”

Kutner is 14 years his junior.

Norman went public with his relationship with Kutner less than six months after divorcing Evert, his second wife. The winner of two major golf tournaments had asked Kirsten to marry him in early 2010 and had announced the news a month before the wedding.

Greg proposed Kutner with a six-carat diamond ring. Norman apparently asked the question when he and Kirsten were standing in the kitchen chatting about their day.

“One minute we were having a day-to-day conversation and the next moment, all of a sudden, everything changed — our lives changed. It was perfect,”

Where Did Kirsten And Greg Meet Each Other?

The designer and the golfer apparently were also long-time friends of each other. Norman and Kutner had been friends in the past but reunited 14 years later in Cairo. They had initially met at a golf tournament.

Kirsten, though, had no interest in the sport. She was there because her parents worked with a company that sponsored the event where Norman was playing, so she attended it with them. However, that was that and the future couple went their separate ways after that first encounter and didn’t meet again for another 14 years.

Their second meet-up happened in Cairo where they were working on each of their projects. Greg was building a golf course, as part of his golf and lifestyle business that had grown substantially since he first met Kutner.

Ms. Norman, on the other hand, was finishing the interior design of the Fairmont Towers Hotel.

It was after that they got to develop their relationship. Though some say they had started seeing each other in the early ’90s when Greg was still the husband of his first wife, Laura Andrassy. For years after their marriage, Kirsten Kutner and Greg Norman resided in Hobe Sound, Florida.

Before Kirsten Kutner, Greg Norman Was Married To A Flight Attendant And A Tennis Player

Before Kutner, Norman was in a marital relationship with a tennis player Chris Evert. Even before that he was the husband of another woman Laura Andrassy, a flight attendant.

Norman was with his first wife, Andrassy for 25 years; they had married in 1981 and ended their courtship in 2007.

The 20 times winner in PGA Tour filed for divorce from Andrassy in 2006. A court battle lasted nearly two years before Norman and Laura reached an agreement that saw the former receive $103 million.

Andrassy and Norman have two adult children – son Greg and daughter Morgan. After Laura, Greg married Chris Evert, former American tennis star in 2008. They, however, would also part ways barely 15 months after their lavish wedding in the Bahamas.

The two had a quickie Key West divorce in December 2009. Less than six months after divorcing Evert, Norman went public with his relationship with his now-wife Ms. Kutner.

The Telegraph reported Norman’s first wife, Andrassy after hearing the news of the 14 times winner in European Tour and Kutner’s secret wedding was a bit shocked.

Kirsten Too Has Two Daughters From Her Former Marriage

As for Kirsten, she was formerly the wife of Senior financier Neal Kutner once reported to be operating from Zurich.

During the time of Kutner and Norman’s wedding, he was a senior executive with the global asset management firm Bank of New York Mellon.

From her marriage to ex-husband, Neal, Kirsten also has two daughters, Kaya and Kelly whose pictures the designer occasionally shares on her Instagram.

Kutner and her first husband had married each other in July 2000 while some report they had been husband and wife since the 1990s. The latter apparently didn’t take the news of his ex-wife and Norman’s marriage all too well.

Did Kirsten Kutner And Greg Norman Have An Affair?

Although Norman and Kirsten’s marriage came shortly after the former’s separation from Evert and way long after his split from the first wife, Laura. In an interview, Laura, however, claimed when the former Japan Golf Tour winner married Kirsten in 2010, he was marrying more than just a friend.

The year was 1995. Aussie golfer had been married to Andrassy for 14 years. Greg then from his multi-million dollar waterfront Florida mansion, gradually started talking to his Kristen.

Norman was talking to this woman in secret and this lady was none other than Kirsten herself. The two had apparently been keeping in touch since their first meeting at a golf tournament two years earlier.

Laura didn’t talk about this liaison between Norman and his current wife until after their 2010 marriage.

It also came to light that Andrassy’s decision to not talk about it, in the beginning, was because of the conditions of the divorce settlement. The very terms that she and her ex-husband had signed.

Andrassy said in May 2010 to Woman’s Day Australia.

How Did Laura Know About Greg And Kristen Affair?

All in all, Laura stated her and Greg’s marriage woes began when she overheard him organizing an illicit rendezvous with Kirsten in 1995.

When they were having one of their secret conversations, Laura one day happened to intercept the phone call to their palatial home. By that stage, an insider says, the 1986 Open Championship Winner and Kirsten, then in her twenties, had been seeing each other for at least two years.

A source said everything was in the open when Andrassy picked up the phone and overheard them having a conversation about meeting up.

After that when Laura confronted Greg about it. Post the confrontation, he had agreed to break off his relationship with Kirsten to save his marriage because, as a parent, he believed it was the right thing to do.

For years, the ex-couple worked to repair the damage Greg’s affair had done. In May 2006, they, nonetheless, announced they would divorce.

What Is Kirsten Kutner’s Net Worth?

Although the attestation of Kirsten Kutner’s net worth is open to question, she clearly and widely is reported to be a woman in the middle of richness and luxuries.

Kutner has been as busy as her husband for decades. That is mostly because of her involvement at her husband’s multimillion-dollar company, and her own interior design projects.

Her clients include the Palm House hotel in Palm Beach, HBA London, and others. Apparently, she is also quite significantly involved in her partner’s business. Not to mention who himself has a venture empire of over $400million and a net worth of around likewise figure.

And aside from being Greg Norman’s wife, Kutner also oversees the management of his apparel line. Through her husband, she is also in the business of eyewear, golf course design to residential development, and premium beef
to Australian wines.

In addition, the couple jointly owns a handful of luxury properties including a golf course in a luxury estate in west Cairo. Speaking of which, the pair once also owned a $77million home in Florida, a $52 million ranch in Colorado, and another home in Jupiter Island Beach worth around $60million.

To have a bit of a perspective on what Kutner brings for herself from her job it would be better to recall her renovation work in one of her husband’s mansions. The resident later went to the market for a whopping $68 million.