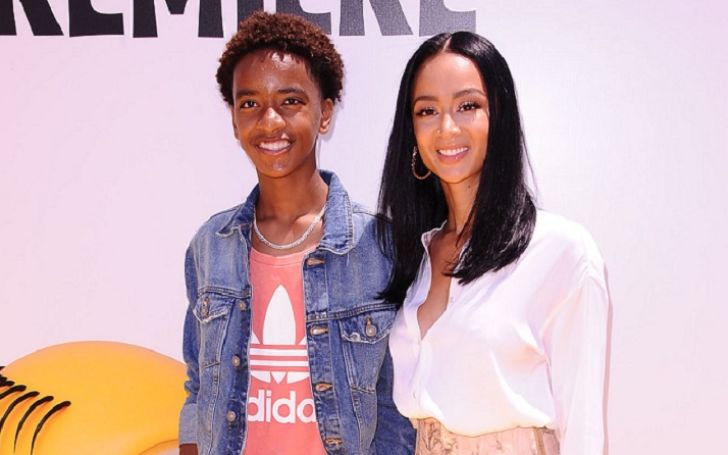 Kniko Howard is the son of Draya Michele, one of the multi-faceted women in the entertainment industry. Draya has made quite a name in modeling, acting, and fashion. While Kniko’s mother has been a regular face in the media, there happened lots of talks about Howard’s father in the past.

The Instagram star initially tried to avoid the gossips, but at last, couldn’t bear with public and media outlets and eventually came out with the true story. According to Draya, Kniko’s biological father now serves as a barber in Pennsylvania.

Meanwhile, Michele did a few dead-end jobs to raise her son as a single mother. Despite all that, the veteran TV personality was accused of being a bad mother to her son Kniko Howard for some silly reasons.

Here we have a lot more to talk about Darya Michele’s son. Let’s begin!

Who is Kniko Howard Father? His Mother Got Pregnant at 17

Michele initially remained tight-lipped when it comes to her first-born child Kinko’s father’s identity. Amidst the speculations, Kniko’s mother began a relationship with the former professional basketball player, Gilbert Arenas. Sources say the two weren’t in a good term throughout their complicated relationship. But, in the meantime, people started speculating Arenas to be the real father of Howard.

As soon as the rumors hit the media, the former Washington Wizards point guard shut down the speculations and asserted that the two met for the first time only in 2008. He said that one of his teammates, DeShawn Stevenson introduced them.

Later on, numerous online tabloids claimed that Gilbert paid about $20,000 to keep the news from the public. Responding to the allegation, the basketball star challenged many renowned tabloids, including TMZ, and Baller Alert to prove the news. Furthermore, Gilbert pledged to donate a considerable $1 million to each of their charitable organizations if they would prove the allegation. However, they couldn’t find the truth ever.

Despite all that, the rumors continued to swirl on the web. In 2016, the former Basketball Wives alum, Jennifer Williams gushed about Arenas being the father of Kniko during the premiere of TV One‘s series, The Next 15. There she said that she once saw a leaked email that said Gilbert was Kniko’s father.

After years-long gossips and allegations about Kniko Howard’s father, actress Draya eventually came out with the truth. A day after Jennifer’s allegation, Michele explained everything from her pregnancy to the baby daddy’s imprisonment. Draya wrote she was just 17-year-old when she conceived her first child with the man who was later imprisoned for 10 years when she was 7 months pregnant. In her words,

“Here is Darya….. At 17 years old I got pregnant by a man who became incarcerated for 10 when I was 7 months pregnant. With help from my mom, I was able to survive.”

Furthermore, the Instagram model opened up there was no chance of getting pregnant by Arenas in 2002,

“Now, judging by how under-developed and young I was, besides living in a very small city in PA….. There’s no way in 2002 I got pregnant by some athlete.”

Draya went on to say if she was with an athlete at the time, she didn’t have to work “in the club” for years,

“If I had, there’s not a chance in fucking hell I would have wasted 7 years of my life working “in the club” because clearly child support would be on fleek. I have never received A DIME of child support in my life and that’s ok.”

Kniko Howard’s Father is a “Barber”

Explaining all the scenarios of her baby’s father in a lengthy story, Michele went on to write the whereabouts of Howard’s biological dad, Kniko Sr. She revealed that her former boyfriend is currently a barber in Pennsylvania. Draya wrote,

“I have also NEVER attempted to say anyone other than who my son is named after (yes he’s a junior) was the father. My son’s father lives in pa and makes an honest living being a barber. This shit is completely embarrassing to me and my family. And I intend on putting this to final rest.”

“I’m pissed that I had to take time from remodeling my office in my brand new 4000 square foot warehouse to even address this. But I’ve been quiet too long. I’ve also let people tell “my story” on tv too many times. I’ll speak my truths….. You speak your own and keep whatever momentum going by doing that. God bless. Leave the kids out of it for heaven’s sake.”

Is Draya Michele Really a Bad Mother? Her Homework Scandal With Her Son

It wasn’t even a year since Kniko’s father’s case shut down, Draya received a huge backlash again for not being a good mother. It all happened back in late 2017 when the fashion designer posted a photo with kids and wrote in her caption that she refused to sign her son’s homework which is why he got low points.

“I’m all for helping my child with his homework, but at this point, [the teacher] has him harassing me with his speech. I don’t wanna hear it no more! I’m hearing it two times a day for a month straight … Last night he asked me to sign and I said, ‘No. Tell your teacher I’m done with this.’ And today he doesn’t get points because I don’t wanna sign it. It’s not my damn homework. But it feels like it. What do y’all think?”

Fans quickly responded to the post, saying Draya is an irresponsible mother. But, it wasn’t the first time that Michele was condemned on the media. But, she had also made headlines when she was arrested on an endangerment charge in 2010. According to sources, the model left her son alone at her unguarded Wyomissing home while working in Philadelphia. District Judge Ann L. Young later granted her bail with a bond of $25,000.

Kniko Howard’s precise birth date is yet to be revealed. But, as his mother said she was 17 when she was pregnant with him, we can speculate that Kniko is around 19 in 2022. He spent most of his childhood days in Pennsylvania. He currently resides in Los Angeles with his mother.

Besides, as for his nationality, he is an Ameican and is of Afro-American ethnicity.

Howard has a younger half-brother named Jru Scandrick from his mother’s previous relationship with her ex-fiance Orlando Scandrick, an NFL cornerback. Their child was born in 2016.

After some time the two were in a relationship, they also got engaged but couldn’t make their way to the wedding.