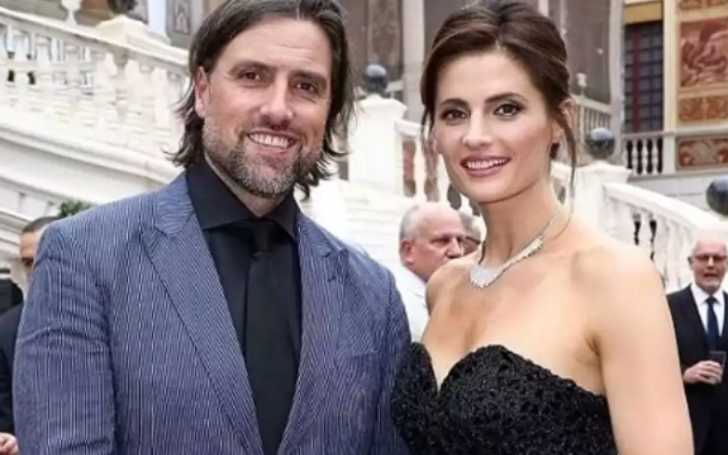 Kris Brkljac is an Australian businessman who is more popular as the husband of Stana Katic. She is a Canadian-American actress and producer prominent for TV series like “Castle” and “Absentia.” She has also appeared in numerous movies such as For Lovers Only, The Double, and Feast of Love, to name a few.

Besides being a celebrity husband, Kris is a successful businessman. He struggled from his early youth to reach where he is today. On accomplishing his career, he simultaneously met the love of his life and tied knots with her dating for several years. Following their wedding, Kris and Stana welcomed their first baby in 2021. So let’s find out, how did the husband and wife meet? How is their relationship?

Read the subheadings below to find out the detailed information about the Hollywood actress Stana’s husband, Kris Brkljac. We will also discuss his age, height, and net worth, as well as information about his wedding with Stana Katic. Stay with us till the end!

An Australian businessman Kris Brkljac was born Kris Srboljub Brkljac on 26th April 1978 in Australia. As of 2022, the entrepreneur is 44 years old and his birth sign is Taurus.

Even though his birthplace is Australia, his ancestry comes from Serbia. Also, later in his youth, he moved to New York from Sydney. Therefore, he holds Australian-American nationality and belongs to mixed ethnicity.

As mentioned earlier, Stana’s hubby Kris has a Serbian heritage. His parents initially resided in Lika, in former Yugoslavia, and later moved to Australia a long time back, even before he was born. However, he hasn’t talked anything about his mother and father, not even their names.

Similarly, Kris Brkljac has two brothers named Dragoljub and Milan. Undoubtedly, like most siblings, they share great relationships but his brothers have not made any public appearances, thus very little about them is known in the media.

Well, now to mention his academic qualifications, he completed his high school education in Sydney. Later, he shifted to the United States and attained a degree in Communication Media Law from one of the colleges in Sydney. Yet, he hasn’t revealed the college he graduated from.

Is Kris Brkljac Still Married? All About His Wife

Yes, Kris is happily married to his long-time girlfriend-turned-wife Stana Katic. She is a Canadian-American actress and a producer, famous for her role as Kate Beckett in the romantic crime series “Castle” (2009-2016) on ABC television. Similarly, she also appeared in the thriller series Absentia (2017-2020) as Agent Emily.

Apart from the TV series, she has appeared in other multiple movies like For Lovers Only, The Double, Feast of Love, and many more. In addition, she is also a nominee for many awards and is a winner of accolades such as the PRISM Awards and People’s  Choice Awards.

The sweet couple Stana and Kris Brkljac have been together for more than a decade now. The couple met each other through the actress’ younger brother Marko Katic, however, they haven’t revealed the date of their first meeting. However, we know the fact that the couple has been together since 2000.

After their meeting back in the day, the duo dated quite for a long time before they announced their engagement in 2014. Following their engagement, the then-girlfriend and boyfriend decided to walk down the aisle on April 25, 2015, just a day before Stana’s birthday.

The wedding ceremony was held at an Orthodox Serbian family monastery on the Dalmatian coast region in Croatia. It was a private party that was attended only by their close friends and family members.

Does Kris Brkljac Have Children?

Well, the husband and wife after some years of nuptials welcomed their first child in 2021. Since both Kris and Stana maintain a low-key profile when it comes to their family and personal stuff, nobody had a clue of the big news coming on the way. Neither the couple announced their pregnancy nor the birth of a baby.

Regardless, the Castle star’s post on her Instagram hinted to her followers the news. She posted her beau’s picture with a caption;

“Happy Father Day to all the Pappys out there, but an especially Happy Pappy’s Day to my love. Best decision I ever made was joining forces with you. We love you and are so glad we get to share this life together. ❤️💋 #Blessed”

Even though the duo reportedly had their baby during the winter, they haven’t shared any details on it. The name, gender, birth date, and appearance of the kid are still under the wraps. Well, the mother and father might be planning to grandly introduce their baby or maybe they want to maintain the kid’s privacy just like they do theirs.

Kris Brkljac is an Australian businessman who struggled a lot during his early twenties to reach the place where he is today. He left his hometown and resided in New York City seeking a job that satisfies him. He has made his identity through his hard work, living on the streets, and being homeless at the young age of 21 years old.

All his hard work paid off as he runs an international sales and development company. He is also an independent consultant and head executive strategist for 500 companies. Before this, he also served as the vice-president of sales at Dispute Suite.

On the other hand, Brkljac also starred in one of the episodes of the TV series “Castle” in 2013 alongside his wife Stana. Not only this, but he also appeared in the movie Lost in Florence in 2017 with his life partner as a co-star.

What Is Kris Brkljac’s Net Worth?

Being an established businessman and working from the early age of 21, Kris must have amassed a good fortune. He has an estimated net worth of between $1 million to $5 million. He has collected his worth from his successful business career.

Meanwhile, his wife is also a popular Hollywood actress. She is a multi-millionaire with a total fortune of $12 million to $15 million.

What Is The Height of Kris Brkljac?

The height of the businessman is 5 feet and 6 inches tall.