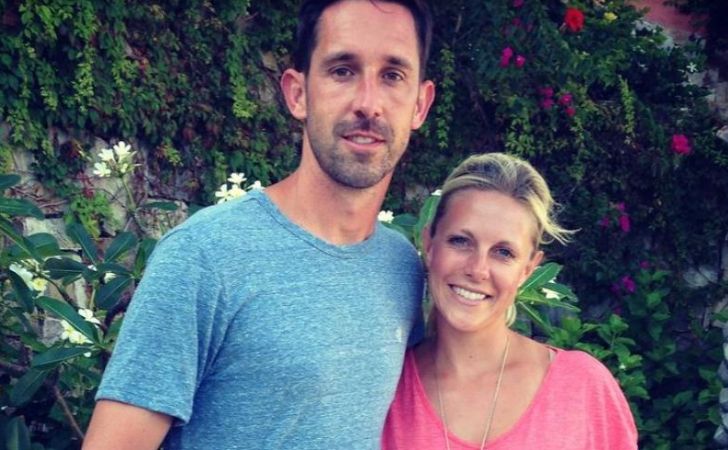 Mandy Shanahan is primarily recognized in the media as Kyle Shanahan’s wife. Talking of her husband, he is an American football coach of the San Francisco 49ers of the National Football League (NFL).

Well, Mandy seems to be pretty much enjoying all the fame brought in because of her famous husband. Besides, she is a mother of three with her spouse. But what about her career and other details?

Don’t worry. Here, in this bio, we are going to give a deep insight into her life, with every detail including her parent.

While the exact detail is not known, Mandy was born in the early 1980s, in the United States. Her birth name is Amanda O’Donnell. She grew up in Colorado along with her mother Nancy O’Donnell. Her mother, who died in 2002, was an 8th-grade teacher.

Talking about her education, she did her high school at Cherry Creek High in suburban Denver. Later, she joined the University of Colorado, where she finished her graduation.

Her Mother Died Of Cancer

It all started back in around November of 2001 when she went for an outpatient procedure to remove gall stones. But to everyone’s shock, she was diagnosed with Stage 4 gall-bladder cancer.

She passed away three months after the diagnosis. Needless to mention, Mandy had a great love for her mom and it took her time to recover from the tragedy.

If you didn’t know, Mandy is actually married. Kyle and Mandy walked down the aisle on July 5, 2005, with close friends & family members attending the marriage.

They reportedly had a Roman Catholic ceremony. Over 500 guests attended the couple’s wedding held at Shanahan’s Cherry Hill house. Well, the guests also included George W. Bush’s daughter Jenna Bush, who happened to be the roommate of Kyle’s
sister Krystal at the university in Texas and in NYC.

As of now, the couple seems to have stood by the wedding vows for over 15 years now. The couple still shares the same love & respect for each other, rather it seems to have increased even more.

Both the husband and wife have been of huge support from one another, in good times and bad.

How Did Mandy Shanahan Meet Kyle?

The couple’s meeting is an interesting story. They first met while they were in high school at Cherry Creek High School in Colorado. Though Kyle was her senior at the college, they became friends. Their friendship soon turned into a romantic relationship. They reportedly began dating the summer after Mandy, aka. Amanda graduated from Cherry Creek.

They later got reunited after Mandy’s mom was diagnosed with cancer. At the time Kyle served as a helping hand for Mandy, helping her cope with the situation.

If sources are to be believed, Kyle moved every weekend to Colorado to spend time with her mother. While her mother did not fight the disease, Kyle and Mandy’s bonding strengthened.

Talking about the harsh time and the support that came in from Kyle, Mandy once said,

He completely stunned me, Kyle, hands down, got me through that. After going through that with him, I couldn’t imagine being with anyone else. What was so alarming to me, being that young and going through something that devastating, I realized it’s not going to be the last sad thing that I go through.

Also, the football coach, who had no plans to marry anytime soon changed his mind. Talking of the same, he said,

I never planned on getting married at a young age, But then I understood. ‘OK, you don’t necessarily get to pick when you get married. You get married when you find the right person.’ And I found her. So I changed my plans

She Is a Mother of Three Kids

Mandy Shanahan is a mother of three children. She became a mom just a couple of years after her marriage. Her first child, a daughter named Stella, was born in 2008, around three years post her wedding.

Well, she gave birth to her second kid, a son Carter in 2010. The interesting thing about Carter is that he is named after Lil Wayne’s birth name Dwayne Michael Carter Jr. The fact was revealed by former football quarterback Chris Simms in a podcast with Bleacher Report.

As per him, his father used to be a huge fan of the rapper. In his words, he was obsessed with Wayne. He said,

He was obsessed with Lil Wayne my early years in the NFL, Kyle’s one of those guys, if you’re hanging and we’re drinking some beers or whatever, he’s got to control the music. And he has A.D.D., so we can never actually listen to a full song.

Similarly, the third child and second daughter Lexi were born in 2013.

What Is Mandy Shanahan’s Net Worth?

As the wife of one of the most successful American football coaches, Mandy undoubtedly enjoys all the luxuries. But when it comes to details of her net worth, the celebrity spouse has been pretty much silent.

On the other hand, her hubby Kyle Shanahan is pretty wealthy with a net worth of $4 million as of 2022. Likewise, he makes a salary of $3.5 million.