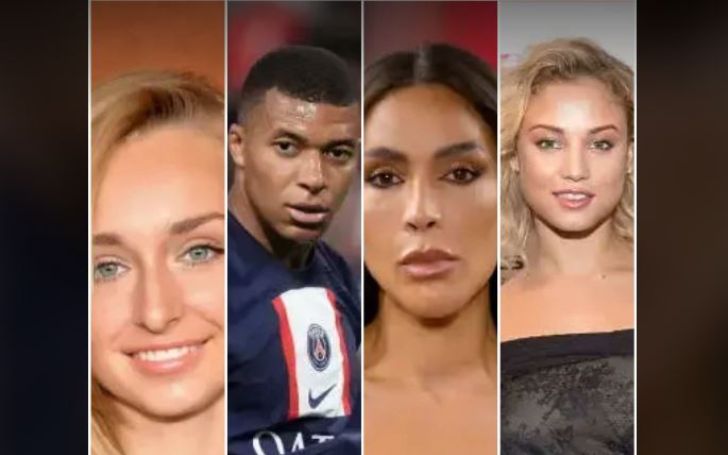 Kylian Mbappe is arguably the hottest property in top-tier football competitions. He is fresh off a heartbreaking yet impressive performance at the 2022 World Cup final against Argentina.

With each game, Mbappe seems inevitable to achieve greatness and he also appears destined to be an equally famous personality off the field – and despite the recent upset we are daring to talk about his dating life. While footballers have no shortage of dating partners and when one has a profile as big as Kylian Mbappe, their love affairs are almost always national as well as the international storyline.

Apart from his goal-scoring ability, many fans of his are also interested in knowing who Mbappe is actually dating. Two names have appeared rather frequently whenever Mbappe’s dating life is under discussion. Lately, there are rumors of Mbappe dating Rose Bertram and Ines Rau. There however are also some other names that have gotten a fair share of popularity as the rumored girlfriend of Mbappe. Let’s find out the truth here.

Rose Bertram is one such recent name that has been strongly linked with PSG prince.

Bertram 28, who is four years older than Mbappe first signed with a modeling agency at age 13. She is the daughter of a Belgian father and a Cape Verdean mother.

Bertram was previously dating Dutch footballer Gregory van der Wiel with whom she also has one child. The couple however ended their relationship in July 2022. And it was soon after that, that the tabloids started to link Bertram with Mbappe.

Bertram as a model has appeared in numerous high-profile campaigns for brands including L’Oreal, Primark, H&M, and Agent Provocateur. She also has close to 1 million followers on Instagram.

Meanwhile, there’s another name whom the news media have linked with the French footballer and she is a fellow countrywoman and trans model, Ines Rau. The footballer and model were first spotted together around Oct 2022. The world became aware of them when the pictures of Rau and Mbappe hanging out on a yacht became viral. It was anything but two people casually hanging out as the PSG forward was carrying Rau in his arm. People first saw them together at the Cannes Film Festival in May 2022.

Rau is also a popular social media personality who has over one million followers on Instagram. She was additionally the first trans person to grace the front page of Playboy. In fact, she was Playboy magazine’s Playmate of the Month for November 2017.

The rumor of Rau and Mbappe’s relationship started to become media famous when the latter announced he was leaving PSG before extending the contract with the French capital side anyway.

Mbappe and Rau reportedly are still girlfriend and boyfriend and they have been so for several months.

While not much about Rau’s life as a kid is in the discussion, it has been reported that she had a gender reassignment surgery at 16. She however would keep it a secret until the age of 24. In addition to being a model, Rau is a dancer and also performs as a DJ in Ibiza and Spain.

Aside from the aforesaid names, Mbappe has also been put under the bracket with some other girls. One of them is Alicia Aylies, a French singer and ex-Miss France.

The gossip however was amidst the 2018 FIFA World Cup. Aylies attended every world cup game of France wearing Mbappe’s shirt. It though never came to light whether the two names were actually a couple or not as Mbappe never addressed the issue publicly and neither did Aylies.

Emma Smet, a French actress, is another name that the media has linked to Mbappe in the past years. Smet and Mbappe’s relationship rumor began when the two spawned a picture of them watching a game together in Nov 2021.

Smet at the time however strongly refrained from giving out any details regarding the hearsay. And Mbappe, too, remained private about this particular subject. Some reports nonetheless suggest Emma and Mbappe were serious for a while but they broke up behind the scene in March 2022. Smet is famous for films like Tomorrow Is Ours (2017), Les Sega (2022), and After Louise (2019).

Stella Maxwell, a former Victoria’s Secret model is another individual to have managed to put her name in the list of Mbappe’s list of possible dating partners.

This rumor started when the five foot ten inches striker attended a gala at the Cap Eden Roc in Cannes with the Belgian model Maxwell shortly after the footballer had renewed his contract with the PSG. The thing that sparked the dating rumor was the picture where Maxwell was being a bit affectionate with Mbappe; the now 32-year-old model was giving a smooch to the French striker.

So Who Is Mbappe Actually Dating Now?

Mbappe apparently is quite ahead of the curve considering footballers settle rather quickly when it comes to having girlfriends. His reluctance to sit in the interviews is also what makes his personal life a bit too private. While as mentioned there are a number of women with whom the media claims he has had a relationship in the last few years. But as of recently, most of the word of mouth points towards Ines Rau, the trans model. But then again, it will be a while before footballing fans know what’s the real story.

Who Is Blake Bortles Wife? Or Is He Dating A Girlfriend? All The Details

Joshua Bassett Girlfriend & Relationship: Find Out Who He Is Dating in 2023