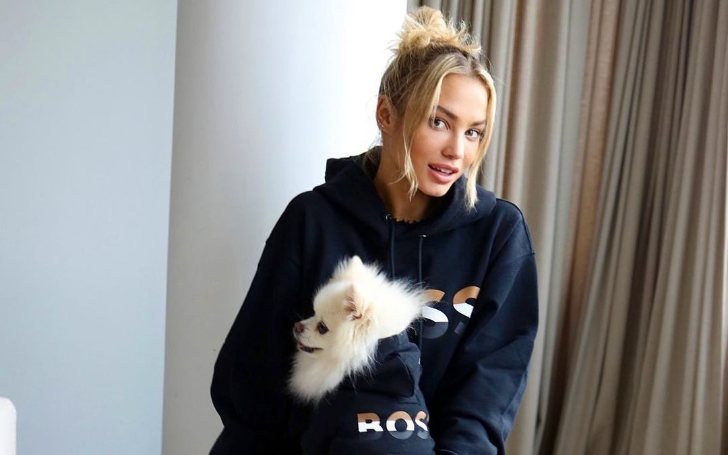 Rose Bertram is a Belgian model best known for her appearances in magazines like Sports Illustrated and GQ. Apart from her modeling career, Rose is equally known for being the ex-partner of the Dutch former footballer, Gregory Van Der Wiel.

Besides being Gregory’s ex-partner, at present, she is in the limelight for her rumored relationship with the French professional footballer Kylian Mbappe. Recently, several tabloids have linked her name with Mbappe and called them secret lovers. Well, what is the truth? Are Rose and Kylian really having an affair, or is Rose single?

Let’s get to find out everything about Rose Bertram in the following article including her rumor relationship, daughter, early life, and much more.

When was Rose Bertram Born? All About Her Early Life

The Belgian model, Rose was born Stephanie Rose Bertram to her Portuguese mother and Belgian father on October 26, 1994, in Kortrijk, Belgium. As of 2023, she is 28 years of age and has a birth sign Scorpio.

Similarly, Bertram spent most of her early life in Flanders, the Dutch-speaking part of Belgium. Likewise, when she turned 11, she together with her parents moved to Ghent, a place called Denize, and grew up there.

Besides, as per nationality, she holds Belgian nationality. Further, she belongs to a mixed race as her mother is of Portuguese, Angolan, and Senegalese descent while her father of Scottish.

Rose Bertram’s Career As A Model; She Started Modeling At The Age Of 16

From a very young age, Rose showed up her interest in modeling due to which her mother helped her to pave the way in modeling. Bertram was just 13 when her mom signed her off to a different modeling agency and after that, she began working on her body.

After three years, at the age of 16, she finally got signed by the Dominique Agency, and from that point, her professional modeling career began. After a while, she rose to fame as a model when she did a photoshoot with one of the well-known photographers Juergen Teller for Jambox. It was her big project which opened her way to the United States.

Similarly, at the age of 18, she made her way to the US and signed a contract with Merilyn. As a prominent model, she then appeared in several campaigns including H&M, L’Oreal, Hunkemoiller, Primark, and Agent Provocateur. Bertram also photographed for the Oyster, Galore, and many other big fashion companies. In 2015, just at the age of 20, she succeeded to establish herself as the first Belgian model to feature in the Sports Illustrated Swimsuit Issue.

She Is An Author As Well

In 2019, the popular model Rose evolved as an author. She wrote a cookbook named Chubby in Shape: Jouw skinny en tasty meal and published it on May 28, 2019.

Her diet book got 2 ratings on Amazon and is now available at the cost of $59.06.

Is Rose Bertram Married? What Is Her Relationship With Dutch Football Player Gregory Van Der Wiel?

Absolutely No, the 28 years old Rose is not married yet. But she was in a live-in relationship with her ex-boyfriend Gregory Van Der Wiel for almost a decade. The couple for the first time met in Amsterdam at night club. In the meantime, Bertram was just 17 and had just started her modeling career while her now ex-partner Gregory was 23 and already a Dutch football star.

While partying at the nightclub, the former flames met through their common friends and instantly found each other attractive. In this regard, Rose once said,

We had friends in common, “There was no getting in, it happened naturally.

After two years, the couple moved in together. The supermodel told,

We got together two years later, and I joined him in Paris.

Since then, Rose was together with her boyfriend Gregory till July 2022 and now both of them have parted ways ending their almost 9 years of relationship.

Why Rose And Her Ex-Boyfriend Gregory Van Separated? What Had Happened?

In 2022, Rose announced her separation from her long-term partner Gregory. What had actually happened between the two is that lately her partner Wiel was going through some mental health problems which he had informed through his Instagram as well. Gregory’s had mental breakdowns time and again which affected the couple and as a result, they ended their relationship.

While responding about her separation from her former boyfriend Gregory, Rose stated,

“There are a lot of people who deal with this. It’s not talked about enough and in my case if you don’t know enough about it, it’s very difficult to understand that person.”

She further said that she found it difficult to help her partner in such a critical mindset. Bertram added,

“It hasn’t always been easy to deal with. It breaks my heart that he feels this way and that I can’t help it.”

Even though the pair is no longer together as a romantic couple, they still are a good friend.

Three months after her breakup with the Dutch former soccer player, in one interview, Rose announced her relationship status as single. Meanwhile, Rose also said that she is ready to welcome a new person in her life. She said,

“I am currently single and ready to mingle”, “You don’t decide in one go that you’re going to break up. That went on over a long period of time. It’s been three months now.”

Over some months of her interview, in December 2022 during the FIFA world cup, Rose’s name got involved with the PSG star Kylian Mbappe.

Several media made news of Rose having a secret affair with Mbappe. Her presence in the Qatar stadium and her shout-out for Kylian aroused doubt about them being in a relationship and French media even claimed that the two are lovers. So, the question is, is it really true?

Apparently, both the couple has not addressed their relationship rumor yet. So, until and unless, Rose and Mbappe don’t accept it officially, let’s consider this link just as gossip.

Around the same time Rose was linked with Mbappe, the PSG forward was also rumored to be dating model, Ines Rau.

Bertran Lately Appeared As A Contestant In The Reality Show, Expedition Robinson

The year 2022 brought so many changes in the life of Kortrijk natives, from her separation from her 8 years partner to her rumor relationship with the PSG prince Mbappe. In addition, she worked with several big fashion houses and also ramp walked for Qatar Fashion United. Not only all this but Bertran also appeared as a contestant in the Dutch reality TV series Expedition Robinson.

While she was in the reality show, Bertran was rumored to be in love adventure with another contestant Thijs Boermans. There was also gossip that due to her lovey-dovey with Thijs, makers had given her a choice, either to leave the show or her relationship with Boermans. It has been said that she left the show early due to this.

But later, regarding the rumor, the model stated,

“I didn’t leave the program early, so I don’t know where this came from. You will see for yourself when it airs.”

Whatever the rumor is, the truth will be known after the episodes will get telecast.

Rose Bertram Is a Mother Of Two

In the meantime, Rose is absolutely enjoying her motherhood. On May 4, 2022, Rose shared a post together with her babies and wrote,

“My children have inspired me every day since motherhood changed my vision of life. Living boldly with confidence is what I want to teach my children…Live life to the fullest. Feel Alive.”

Coming up to 2023, Rose is no longer together with the father of her child, however, both her little munchkin aren’t devoid of the love of their parents. They spent time with both their mom and dad.

The Belgian model is hugely active on Instagram with 956k followers. On her Instagram, she keeps updating her personal and professional life. To date, she has uploaded her achievements as a model, moments with her two beautiful daughters, and her little dog on her Insta page.

Since she is an accomplished model so undoubtedly she has earned a great amount of money from her profession. She is reported to have a net worth of $5 million as of 2023.

Who Is Michael Che Girlfriend? Is He Married To A Wife?