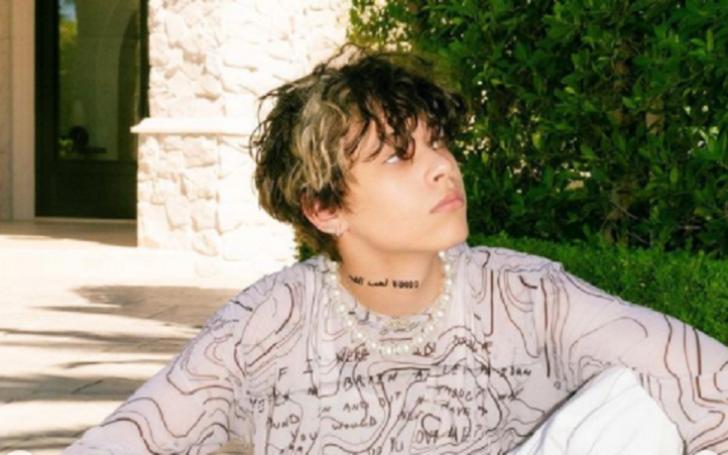 Landon Asher Barker is an American singer, rapper, & musician, who is also famous as the son of the most celebrated drummer Travis Barker. The heavily tattooed artist Travis who has been in the music world for over a decade and more has performed for several renowned rap-rock bands such as Transplants, Goldfinger, and more. On the other hand, Landon’s mother Shanna Moakler is a model and actress.

Besides, as for Barker’s parents’ marriage, the two didn’t have an amicable end. Since their divorce, both Landon and his younger sister Alabama often said of their mom as an “absent parent.”

In the meantime, there are lots of queries about Travis Barker’s son. Many of their fans have asked questions is Landon following in his father’s footsteps? Besides, people are also keen to know who is Landon Barker’s girlfriend in 2022. Here is everything you need to know about him including his inspiration to get a face tattoo, dating life, and more…

Travis Barker’s son Landon Asher Barker was born on October 9, 2003, which makes him age 19 in 2022. Growing up in Santa Monica, Landon also did his schooling from there.

Talking about his Nationality, the star kid is an American. And as for his ethnicity, Travis Barker’s son has a mixed ethnical background as his mother is of German, Portuguese, and Irish descent, whereas, his father is of English, Irish, and Italian descent.

We mentioned earlier that Landon Barker has a biological sister Alabama. In addition, Barker also has a half-sister named Atiana Cecilia De La Hoya from his mother’s relationship with her ex-fiancé, Oscar De La Hoya.

Is Landon Barker really Travis Barkers’ Son? He Was Born Before His Parents’ Marriage

Yes, Landon is the son of Travis Barker and his second wife Shanna Moakler, a former Miss USA. He was born on 9th October 2003, in Santa Monica, California. And his parents exchanged their vows on 30th October 2004, a year after their first child was born. Their gothic wedding took place in Santa Barbara, California.

However, their marital relationship soon started getting worse and worse by late 2005. They eventually separated in 2006. A friend of the duo said at the time,

“This was very normal for them. The relationship was always dysfunctional, they were always love and hate. It was volatile. He’s a rock star, and she likes to go out. They both love and fight hard.”

Although their divorce proceeding came to an end in 2008, their family battle over their children was still continued until the mid of 2015. Furthermore, their often infamous altercations even led them to police stations and court proceedings.

Before marrying Shanna, Barker was in a matrimonial relationship with Melissa Kennedy. And as of now, the drummer is dating Kourtney Kardashian, a veteran reality star and an Instagrammer.

Landon Barker’s Relationship With His Mother

Landon and his younger sister Alabama, born on 24th December 2005 frequently talked about their mom on their respective social media accounts. Alabama once posted a TikTok and wrote on the top of the video, “I cut off family too. They do you the dirtiest.” In the clip, the star kid appeared herself lip-syncing the Ramz song “Barking.”

As soon as the clip went viral, commentators started accusing her of being the daddy’s girl. In the meantime, Travis’ son replied,

“Actually if you weren’t such a dumb a– you would realize our mom has never been in our lives and isn’t there for us like our dad is.”

Thus, it looks like the relationship between Landon and his mother Moakler isn’t too good.

Apparently, the mother of two children Moakler, 46 denied all the criticisms of her parenting. She stated in an interview with People,

“The claims of being absent from my children’s lives are false and incredibly hurtful. Co-parenting is hard, but I have always and will continue to prioritize my children’s happiness and well-being.”

Both of Landon Asher Barker’s Parents Are Successful Individuals

As we talked earlier Landon’s father Barker has a refulgent career as a musician who has been a drummer for the rock band Blink-182 since 1998. He is also a member of the rap rock group Transplants. Aside from her drumming career, the musician is a businessman too. He is the founder of the clothing company Famous Stars and Straps.

Besides, Landon Asher’s mother Shanna who won Miss Universe 1995 pageant is an actress and model. She was even named Playmate of the Month for Playboy magazine in December 2001.

What is Landon Barker Popular For? His Blooming Music Career and Other Endeavors

Having such a popular father figure, Landon who has been in the light since his birth is also following in his father’s footsteps. He first gained attention after his appearance on the TV series Meet the Barkers with his parents in 2005. He popped up on it its episode “It’s Moving Day for the Barkers,” on 6th April.

Back in 2021, the emerging talent appeared in the movie Downfalls High as a drummer. In Jan 2021, Landon who played the drum throughout the film posted a short clip with the caption,

“So happy to be a part of this! Downfalls High, a first of its kind musical film experience, premieres tonight at 6pm PST link in bio.”

Other cast members of the show include his father Travis and an actress Sydney Sweeney, and more.

Besides, Landon has also performed on a few musical stages with some iconic rock stars. Back on 19th July 2017, Travis’ son was seen with The Bored To Death rockers at their epic gig at The O2 Arena, London.

Furthermore, the 17-year-old boy occasionally makes posts on social media with his father, showing their music collaboration of drumming and raping.

Landon Is also a Youtuber

Besides, Landon has considerable followers on his self-titled YouTube channel. Created in May 2016, Barker has over 131k subscribers on his channel as of 2022. He first uploaded a video in May 2017 and has since posted a few other videos on his channel. One of his most-viewed music videos is, “Don’t Need Her.” It has amassed over 214k views.

Does Landon Barker have tattoos?

Like his father, Landon is also a tattoo lover. Travis once told that his son was inspired to get a face tattoo by Lil Pump after the artist performed at his son’s birthday party. He stated to TMZ,

“My son’s 14 and he asks me every day. Yeah, but there’s an obsession with kids and face tattoos now. Yeah, every rapper and you know…Lil Pump played his birthday party. He’s a friend of Landon’s. No face tattoos yet. I don’t know there was like this danger about it when I was a kid, like I was 15 with tattoos, but it wasn’t easy to remove them.”

But, Travis said that He only allows him to get the tat until his hard work doesn’t match with the art. He said,

Who is Landon Barker Dating in 2022? Is TikTok star Charli D’Amelio His Girlfriend?

Travis Braker’s son Landon Braker is now dating social media star, Charli D’Amelio. The rumors about their budding romance first surfaced in the media in June 2022 when the lovebirds were spotted leaving Landon’s concert together.

That same month, Landon and his girlfriend Charli also appeared together at Dixie’s album launch party, further fueling speculations of their then-possible romance.

Although the two seemed to be a little private about their relationship initially, they didn’t take a long time to make it to the public. And the loving duo confirmed they are dating via Instagram after Braker’s girlfriend Charli shared a story on her Insta of the two locking lips in July of the year.

Since then, Landon and his gf are in a romantic relationship. Back on October 9th, 2022, Charli shared a series of photos of the duo on the occasion of her beau’s 19th birthday and wrote,

Before Charli, Landon was in a short-lived relationship with his ex-girlfriend Devenity Perkins in 2016. Sources say that the two dated for several months before they separated.

After their split, Barker didn’t come forward with his love affair for a few years, whereas, his ex-girlfriend Devenity dated the rapper Suigeneris in 2019.

Besides, talking about his ex-partner, Perkins is an actress with a few acting credits under her belt.

What is Landon Barker’s Net Worth?

Landon has an estimated net worth of $500,000 as of 2022. Travis’ son undoubtedly lives an extravagant lifestyle with his father’s massive fortune which is now $50 million.

His dad’s main source of income is his music career.

Who Is Bernice Burgos’ Daughter Ashley Burgos? Everything About Her