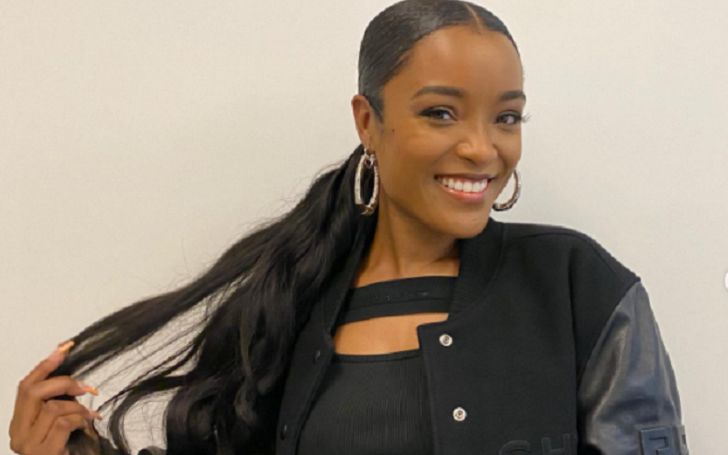 Latoya Tonodeo is one of the budding actresses who has already cemented her place in the entertainment world with a dozen of on-screen credits. The emerging talent who embarked on the acting world in the mid of 2010s actually hit the limelight after her iconic role in Power Book 2: Ghost, one of the most-watched TV series. Over the years, Tonodeo has also worked in a few other notable TV shows like The Oath.

Well, in addition to her flourishing professional career, many of her fans are also curious to know about her love life. So, let’s find out her current relationship status. Does Latoya have a husband or is just dating a boyfriend?

What is Latoya Tornado Age? Her Early Details

Latoya’s age is 24 in 2022. Born in 1997, Tonodeo celebrates her birthday on 23rd April. In 2017, her boyfriend-turned-fiance Arlen posted a beautiful photo of themselves on the occasion of her 20th birthday. He wrote,

“Join me in celebrating my special lady’s birthday!! Happy Birthday @toyofficial ❤️ YOU 😘”

For her childhood, the actress grew up in Los Angeles, California. As per sources, she also completed her high school education from there.

Family Background: Her Grandmother died in 2018

Unfortunately, Latoya has remained a little bit secretive when it comes to her family background. While there is nothing about her parents, Power Book II: Ghost star once revealed in an interview at Noches Con Platanito that her grandmother had Alzheimer’s. And in July 2018, Tonodeo announced that her grandmom died, posting a photo montage of her late grandmom on Insta. She wrote,

“Early this morning God called my bestfriend home…my Grandmommie. She is and has always been a blessing to me. I love her so much!”

As far as her Ethnic background is concerned, Latoya is an African-American and has an American nationality.

Latoya is now in a beautiful relationship with her beau-turned-fiance Arlen Escarpeta. Back in 2018, the power duo went on to feature in Sergio Verduzco‘s talk show called Noches con Platanito. And it was where they revealed that the two first crossed their path at the gym. The duo further said they both fell head over heels for each other from that moment.

Talking about their engagement, Latoya and her boyfriend Escarpeta dated for over six years before they got engaged in 2021. Tonodeo was the one who announced the big news via an Instagram video of herself, in which, the actress showcased her stunning ring. In the video, posted in December 2021, the TV star was seen riding in a car.

Besides, Latoya and her soon-to-be husband Arlen are also quite open about their smoldering romance. They often come up with their adorable photos on their respective social media handles.

So, as of now, it is totally safe to say that both of them are highly committed to each other.

The Couple Worked Together in ‘The Oath’

Latoya and her now-fiance Arlen who have shared the same love for acting also worked together in a popular TV series The Oath. In the series, Tonodeo played the role of Tara Byrd while her then-bae Arlen portrayed Damon Byrd. Some other notable actors in the show include Tiffany Haddish, Nora Dunn, and more.

Before Escarpeta, a Belize native began his relationship with Latoya, the actor was married to his first wife Benita Krista Nall. The former couple tied the knot back on 21st May 2011, in a small ceremony. Nevertheless, their short-lived marriage ended within a year of their nuptials. As per IMDb, they divorced in Jan 2012.

Much like him, Escarpeta’s then-spouse Benita is also an actress with several acting credits under her belt.

The Los Angeles native Latoya kicked off her acting career with a small role as Party Girl in Becoming Pony Boi in 2009. It took over five years for Tonodeo to snag another on-screen role as she played in the 2015 action-comedy movie Paul Blart: Mall Cop 2. She shared the screen in the film with some biggest Hollywood stars like Kevin James, Raini Rodriguez, and Neal McDonough.

In the following few years, she featured in on-screen projects like Dutch Hallow, The Perfect Match, The Fosters, and The Head Thieves.

Her Rise To Stardom

Latoya only grabbed worldwide recognition after her breakout performance in the drama TV series Power Book II: Ghost. She appeared in the project as Diana Tejada, the youngest child of her TV parents Lorenzo and Monet, the second-in-command of the Tejada drug cartel.

Further talking about the show, it follows the life of Tariq (played by Michael Rainey Jr.) who followed his dad’s footsteps as a drug dealer. The show was also renewed for a third season in late 2021.

What is Latoya Tonodeo Net Worth?

As a promising actress, Latoya has a net worth of about $1 million as of 2022. Looking at her burgeoning career, the abovementioned amount will definitely hit a huge figure in the near future.

At present, she lives in New York, New York.

As we have already mentioned earlier that Tonodeo is quite active on social media handles. She has over 645k followers on her Insta and about 50k on her Twitter. Additionally, she is also a TikToker with 104.4k followers.