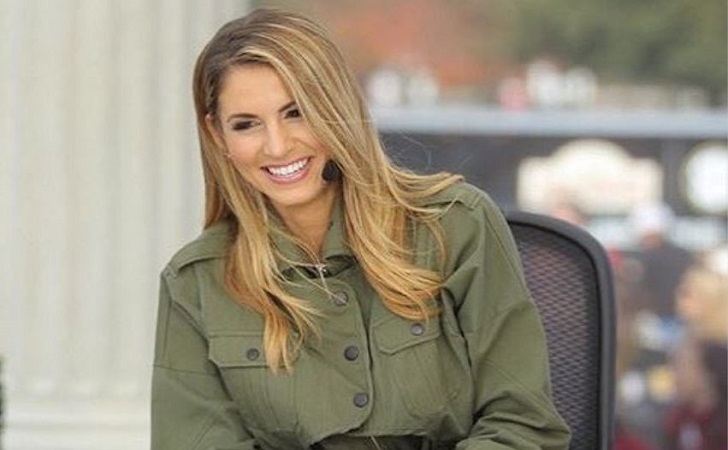 Lauren Shehadi is an American sportscaster who has been a part of several news networks and TV shows. She has not only anchored shows but has also done field reporting and hosted some prominent TV series. She is mostly recognized in the media for her work with MLB Network and Turner Sports.

Lauren is pretty much accomplished professionally, but what about her personal life? Is she married or dating a boyfriend? Does she have any children? Moreover, what is her net worth? Well, in this article, we are going to cover all these aspects of her life.

Well, in case you are in search of all the answers about her, continue reading.

Who Is Lauren Shehadi?

Lauren Shehadi is a renowned sportscaster known for her work on TV networks like MLB on TBS, Today, and many more. She was born on May 23, 1983, in McLean, Virginia, USA, to father Michael and mother Marry. Her birth name is Julia Lauren Shehadi.

Talking about her education, she completed high school at Langley High School in 2001. Later, she attended the University of Florida, where she received her graduation degree, initiating her career in the media world.

When she was still in college, she even hosted an online web show named GatorZone, which covered the University of Florida’s football team, Florida Gators.

She belongs of Lebanese descent and grew up in McLean.

She shares A Great Relationship With Her Parents

Lauren Shehadi is a grownup and a leading personality in the sportscasting world. Well, at 39 years of age, unlike most kids, Lauren shares a great relationship with her parents.

In fact, she often manages time for dinner and short vacations with her parents despite her busy schedule. Not only this, but she does not even shy away from posting photos of her parents on her social media.

Back in March 2017, she even took her mom on the sets of Dancing with the Stars. She gladly posted a photo from the day on her Instagram. In the caption, she wrote,

Had to take mama…hasn’t missed an episode in 24 seasons.

Not only does her mom, but she shares similar chemistry with her father as well. She has shared a number of photos of her dad on her socials. Check out this one from March 2017.

Her Journalism Career: Moved To MLB Network After A Brief Stint At CBS

Lauren Shehadi has been a journalist for a long time now. She began her career as an intern at The Best Damn Sports Show Period. Eventually, she worked as a sports anchor for KXMC-TV in Minot, North Dakota.

Later, she moved on to work with CBSSports.com and CBS College Sports Network. There she was the host of many videos for CBSSports.com and co-hosted shows including the SEC Tailgate show and the ALT Games with Jonny Moseley.

After a brief stint at CBS, she joined MLB Network in 2012, where she hosted many shows including The Rundown and MLB Central. In January 2018, she was the host of The Podium, a podcast focusing on athletes at the 2018 Winter Olympic Games in PyeongChang, South Korea.

Further, with the network, she was also the field reporter for MLB on TBS from 2017 to 2020. Apart from these, she has also hosted other shows like Today, American Chopper: The Series, MLB Tonight, and some others as well.

Is Lauren Shehadi Married, Engaged, Or Dating a Boyfriend?

Well, this has been the most mysterious aspect of Lauren’s life. Apparently, she is not married but back in February 2018, there were rumors that she was engaged. The speculations about her engagement began spreading after she posted a photo where her fans noticed a ring on her finger.

When asked about the ring, she didn’t say anything about it which further aggravated her fans. Unfortunately, to this day, Lauren has not revealed whether she is married or dating a possible boyfriend.

It has been years since the rumors began but she has not addressed the matter so far. So far, it is unclear if she is married to a husband or even engaged at the least.

As far as her dating life is concerned, she has been very low profile. She has not been spotted with anyone who could be claimed as her boyfriend. Hopefully, time unfolds all the details.

She Is Active In Charity Works

Not many know but Lauren Shehadi is very active when it comes to charity work. Over the years, she has been a part of numerous charity works including Project Sunshine, which focused on providing hospitalized kids with art kits and toys so as to distract their minds from the saddening atmosphere of the hospitals.

She also often gives hints from her charity events on her social media.

How Much is Lauren’s Net Worth?

As a successful reporter for some renowned news networks, Lauren makes a large amount as her salary. If the sources are to be believed, she has a net worth of around $1.1 million in 2022.