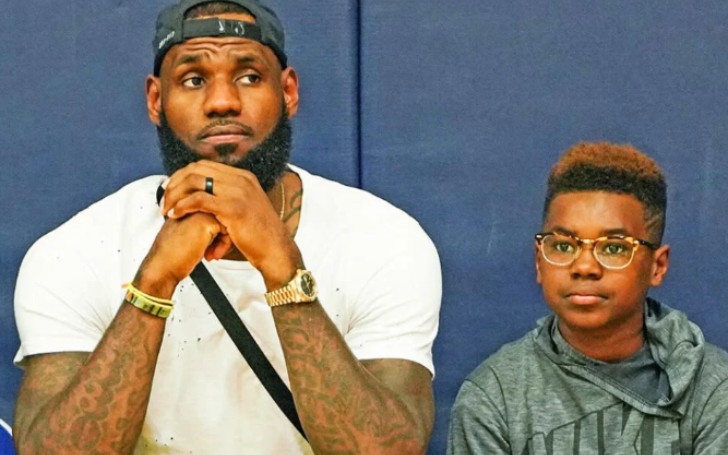 Bryce Maximus James shot to fame as the son of the legendary NBA player LeBron James and his girlfriend turned wife Savannah. His dad, who is also popular as “King James” is named as NBA’s most valuable player and has won two Olympic gold medals along with many other titles.

The celebrity child is the second kid in the family who was born before the nuptials of their parents. Growing up, Bryce’s interest in basketball also grew with his age and now he is making his way into the sports world following in his father’s footsteps. Stepping up towards his dream, he received the first division scholarship offer at Duquesne University to play basketball as well.

Bryce is amazing the world with his basketball moves which most probably have come from his dad. In fact, his windmill dunk move even got viral in the media in July 2022. LeBron likewise is fully supporting him and keeps posting his videos and updates as a proud father.

So, what’s more about his life? Is he dating a girlfriend? Stick with us till the end to find out the details regarding LeBron James’ son, Bryce James’ height, school, siblings, basketball career, and more.

He was born Bryce Maximus James in 2007 which makes him 15 years old as of 2022. The star kid opened his eyes in Cuyahoga Falls, Ohio, on June 14, to his dad NBA star LeBron James and his wife Savannah.

Born to his multiracial parents, Bryce belongs to a mixed ethnic background and holds American nationality. He is the second child of his parents and spent his childhood along with his siblings.

Born to athlete parents, Bryce has not only adapted the sports features from the family but also the physiques. The growing kid already stands at the height of 6 feet and 4 inches height in 2022.

The 15-years-old previously went to Old Trial School in Bath Township, Summit County, Ohio while living in Akron. But later when he moved to his new house in Los Angeles along with his family, he had to change his school as well.

As a result, he was transferred to Sierra Canyon School with his elder brother Bronny. According to sources, he also enrolled at Crossroads school in Los Angeles once. Though it is not confirmed if he studied there, he was on the basketball team of that particular school.

Bryce James Has a Brother And a Sister

As mentioned earlier, the celebrity kid is the second child of his parents. That being said, he has an elder brother and a younger sister. He along with his brother was born before his mom and dad tied knots whereas the sister was born afterward.

The eldest one in James’ family was born on October 6, 2004, and named Bronny James. He is at the end of high school and attended prom recently. Like their father, both sons are interested in basketball and are aspiring players.

Similarly, the youngest in the family,  Zhuri Nova Zames was welcomed on 22 October 2014. She is 8 years old and attends Sierra Canyon School where their brothers previously enrolled. However, unlike her siblings, she is into modeling and related stuff.

Many people are familiar with the name of the legendary NBA player LeBron James who is also called “King James.” Well, Bryce is the younger son of the basketball player and his longtime wife Savannah James.

Likewise, Savannah is the leader of the James house making decisions, supporting her husband, and looking after their children. On the other hand, she is a businesswoman and a philanthropist by profession.

Bryce’s Parents Are Together Since Highschool

LeBron and Savannah know each other since they were teenagers. While most individuals get together after getting fame, Bryce’s mom and dad have stood with one another from the beginning, through all the thick and thins.

The couple was in high school when they came across for the first time in 2002. The husband was in the rival school and a year senior to his wife. James then asked for Savannah’s phone number with one of her friends but she didn’t give him her number. Instead, she took his number and called him later one day when she was feeling bored and had nothing to do.

Eventually, the then girlfriend and boyfriend started dating after some weeks of friendship. The NBA player later proposed to her after several years on January 1, 2012, in Miami Beach. Savannah said “Yes” and the duo walked down the aisle, the following year on September 14, 2013.

Despite being a teenager, Bryce already knows what he wants in life. He is trying his best to make a name in the sports industry just like his father. On a path to pursue his dream, he has already started getting offers from prestigious clubs such as Duke and Kentucky.

In fact, the 15-years-old received the first Division I scholarship offer at Duquesne University in Pittsburgh, Pennsylvania to play basketball. LeBron on 21st August 2022, shared his happiness and the news via his Insta story writing,  “AYYYEEE!!! LET’S GO MAXIMUS @_JUSUTBRYCE.” Even Bryce himself wrote; “Blessed to receive my first d1 offer from Duquesne #godukes,” on his Instagram story.

Prior to this, Bryce also played basketball on Sierra Canyon School’s JV team. Not only that but the brothers together played for the California Basketball Club for the first time. The NBA player was overwhelmed to see his sons playing on the same court.

What Grade Is Bryce Maximus James In?

Bryce has already completed his mid-school and is currently studying in ninth grade. However, he hasn’t received his ranking in basketball as he is too young for that now. Yet, he is an exceptional player and is on the way to becoming a phenomenal basketball player like his father.

King James is supporting his kids to move forward by all the possible means. To teach them all the tips and tricks, he takes his sons Bryne and Bronny along with him for practice. He shared a video of him playing basketball in the Lakers Gym with his boys. For a caption, he wrote,

“Simply no better feeling than doing what I love to do with who I love!”

Looks like the James group is getting ready to take their legacy further. The father of three looked extremely happy looking at both of his son’s progress. They were showing their shooting, dribbling, and dunking skills in the video.

In fact, Bryne’s windmill dunk move even got viral in the media a month before, in July 2022. The little King James is set to take the NBA career forward after his dad’s retirement.

What Is The Net Worth Of Bryne Maximus James?

The aspiring basketball player is already making his name in the basketball world. Furthermore, he has also started getting offers from various clubs and making money out of it. As of 2022, Bryne James has a net worth between $1 million to $2 million.

Meanwhile, his father is an owner of billions of fortune with total assets of $1.2 billion. LeBron James has given half of his life to NBA and has made his worth out of it. Furthermore, he also makes money through brand endorsements, business investments, and his own production company.

Also, he signed a new two-year contract with the LA Lakers on August 18, 2022. The amount of $97.1 million for the contract made him the highest-paid NBA player in NBA history.

Is Bryce Maximus James In a Relationship?

Well, the ninth-grade teenager is still in school, focusing on his studies and career. Besides, neither Bryce nor anybody in his family has talked about him having a girlfriend. Therefore, as of now, he is single and is not dating anyone.

That said, we would love to see him with a perfect partner.

All the kids of the legendary NBA player LeBron James have successfully attracted the attention of the public. Having said that, Bryce is not an exception.