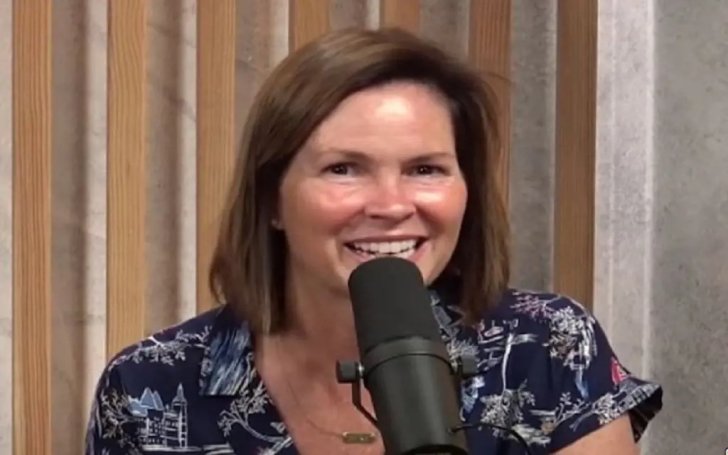 LeeAnn Kreischer is an American writer, actress and podcaster. She is also known for her marriage to the stand-up comedian, actor, and television show host Bert Kreischer. The host of the podcast “Wife of the Party” has become a part of her husband’s comedy show as he frequently uses her as the subject matter of his comedy.

Even though the couples are both actors their love life remains a mystery. A lot of people want to know what the couple is up to these days. Are they still Married? Do they share any children?

Apart from LeeAnn’s marriage & husband, we will also talk about her career, age, & several other details that remain unexplored. So, stay tuned.

LeeAnn Kreischer Early Childhood, How old is She?

She grew up in an ordinary middle-class family but unfortunately, she has not revealed many details about her parents. It looks like, she wants to maintain privacy when it comes to her father and mother. Similarly, talking about her nationality she is American and has a mixed ethnical background.

Just like in her early life, the podcast host hasn’t shared any information regarding her education. That said, she is surely an educated individual. Apparently, she moved to Los Angeles to pursue her career as a writer after finishing her basic education in her hometown.

LeeAnn Kreischer Career: She Is A Writer, Host, & Actress As Well

She started her career as a writer in Los Angeles. Similarly, in the year 2002, she was one of the co-writer of the teen comedy ‘My Biggest Fan‘ which starred members of the band Dream Street.  The film, however, couldn’t release because of various disputes and misunderstandings between the film producer and the band member’s parents. The film, at last, was released on May 18, 2005, and was available for the audience to admire.

LeeAnn also worked as an actress but it was her first and last movie where she starred in the short film ‘Destiny Stalled’ (2000) as a nurse.

Moving on, LeeAnn is currently the host of her podcast “Wife of the Party”. She uses her hubby’s “man cave” for her podcast and generally invites her close family and friends to speak on various subject matters including marriage, children, and life in general.

Moreover, the Destiny Stalled actress also doesn’t shy out to speak on more sensitive matters. In January 2018, she spoke on the topic of the #MeToo movement and Aziz Ansari’s scandal.

How Did LeeAnn Kreischer Meet Her Husband Bert Kreischer?

The two love birds met a couple of times but LeeAnn remembers that one time when they met in a bowling center. Her soon-to-be other half Bert left quite the impression on her. She was so desperate to meet him that she asked her friend and Kreischer’s roommate to give Bert her phone number. Looks like it was LeeAnn, who made the first move to take this relationship to where it is now.

However, Bert didn’t call and after some investigation, LeeAnn found out that the comedian/actor hadn’t asked any girl out. But soon after convincing him, they started dating and in December 2003 they walked down the aisle together.

The duo had met earlier during their yoga class at the Hollywood YMCA, where they were both in the same class. However, at the time LeeAnn had just come out of a breakup and was too preoccupied to get into another relationship.

LeeAnn Is Married To Her Comedian Husband For 18 Years

The lovely duo LeeAnn and Bert got married in December of 2003. As of 2022, they have celebrated 18 years of being together and will be moving on to 19 years in December of this year. We hope for them the best in their married life and hopefully; they will remain the same for years to come and beyond.

LeeAnn Kreischer is currently living with the love of her life Bert Kreischer and their two daughters in their lovely home; situated in Los Angeles California.

LeeAnn’s Husband started his career as a stand-up comedian working at the Tallahassee bar/nightclub Potbelly. In the year 2001, Bert also appeared in the short film “Prepare to Meet Thy God.” Later in 2004, he also appeared on “National Lampoon Live: New Faces-Volume 2” and guest starred on “The Shield.”

Moving on, Kreischer starred in the 2007 film “Alpha Mail” and in 2008 competed in a reality series “Reality Bites Back.” Moreover, his most recent one is in 2020 when he starred in Netflix’s “The Cabin with Bert Kreischer.” In April 2021 it was stated that Bert with Mark Hamill would be starring in the movie “The Machine.”

Bert currently hosts a podcast in his garage which he has name man cave where he does several podcasts, like, “Doug Loves Movies,” “The Joe Rogan Experience,” and “WTF with Marc Maron.”

Her total net worth is not available but as an actress, writer, and podcast host we can say that she has generated a lot of wealth and living a luxurious life.

Similarly, speaking about her spouse, he is estimated to have a total fortune of $3 million; which he has earned from his long history of career, as an actor, comedian, writer, TV show host, and producer.

The podcaster is frequently active on social media platforms like Instagram and Twitter; where the Hollywood writer posts pictures and videos from her podcasts and also of her family members. As of 2022, she has over 121k followers on her Instagram. Likewise, on her Twitter, she has over 6k followers.