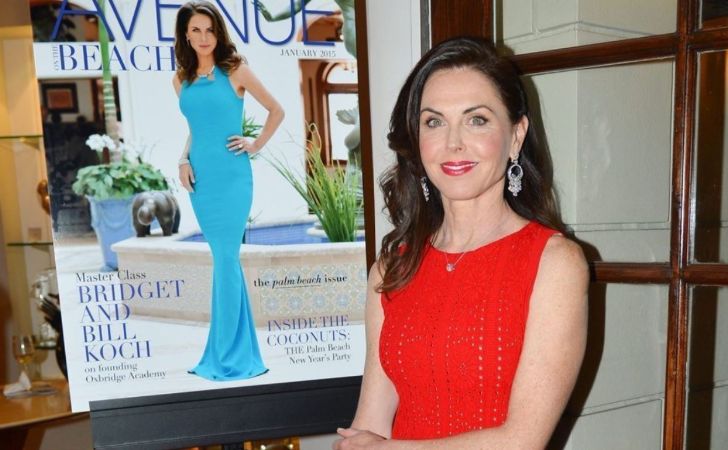 Bridget Rooney is an American socialite and a Pittsburgh Steelers heiress. Born into an elite family, Rooney maintains her family legacy with involvement in social works. But apart from all these accomplishments, Bridget also often makes headlines because of her love affairs and relationships.

Although she married billionaire Bill Koch in 2005, she had also made headlines for her relationship with American actor Kevin Costner. Besides, Bridget is also a mother and apparently shares a great relationship with her kids.

Well, what else is there to know about Bridget Rooney? Here are some interesting details about Rooney’s career, family, & relationships.

Bridget Rooney was Born In An Elite Family

Bridget was born on April 26, 1962, to Timothy James Rooney and June Marraccini. Many of you might not know that her father Timothy James Rooney is the owner of Yonkers Raceway. Not only this, but her late grandfather Arthur Joseph Rooney also carries a huge legacy as the founder of the legendary Pittsburgh Steelers.

She is the granddaughter of Art Rooney, the founding owner of Pittsburg Steelers, an NFL franchise team.

59 years old Bridget Rooney is a married woman. She married a successful American billionaire businessman Bill Koch in 2005. Their wedding was held in an elegant ceremony in Colorado. Bill’s brother David Koch served as the best man.

As a married couple, Bridget and her husband Bill have spent over 15 years and their relationship seems to have grown stronger. despite being for years, they spend time together on beautiful destinations like newlyweds.

In 2014, they were spotted at Le Cirque. They had their ultra-choice Japanese pure-bred beef from Koch’s own 7X Ranch in Colorado on their table, which they gulped down with a 1996 Cheval Blanc.

Back in 2012, Bill also threw a lavish party on 42,000 square foot oceanfront mega-manse in Palm Beach, FL, on the occasion of his wife Bridget’s birthday. And the most interesting thing is Roar singer Katy Perry was hired to perform for the day.

The husband of Bridget, Bill is known for his prodigious spending habits. The billionaire didn’t miss to impress his then-fiancee Bridget with a beautiful ring. As per the New York Times, the couple reportedly shopped a 31-carat yellow diamond at François Graff of diamond fame.

Well, Mr. Graff didn’t miss to flatter the couple with his words saying, “You have impeccable taste.”

But wait, this is not the only shopping, Bill did for his wife. But just 2 years back, Bill bought a 1941 painting of three seminude women worth in million. Well, the painting hangs on his mansion in South Ocean Boulevard.

Further, he also bought a pair of two-foot-tall silver centerpieces made in 1860 by Queen Victoria’s silversmiths. He purchased the property from an English dealer for $240,000, which he has showcased on his dining room table.

Rooney’s affair with two Golden Globe Awards winner Kevin Costner was once a hugely talked about subject in the media. Bridget and Kevin made their relationship public in 1996, two years after Costner’s divorce from his first spouse Cindy Costner.

Soon after this, the couple welcomed their child together, a son named Liam Costner on Nov. 15, 1996.

Well, the clash came after Kevin refused to believe Liam as his child. But after the paternity test went on Bridget’s favor, the actor accepted him as his son. But unfortunately, soon after that, the duo split. Liam is now 25 years of age.

Bridget Rooney Children: She Is a Mother of Two

Apart from Liam Costner, who is her son from her affair with Kevin, Bridget also has another kid with her now-husband Bill. With her husband, she has a daughter named Kaitlin, who was born in 2006.

Well, Kaitlin studies at Oxbridge Academy, which is founded by her father. Apart from her studies, she is also into ice skating. In fact, she even performed at Come Fly With Me! event on November 30, 2018, presented by Palm Beach Ice Works. See below!

Talking of Bill, he also has another son Wyatt Koch with her former fiancee, Ivie Gabrielle Slocumb.

No doubt, Bridget lives a pretty luxurious lifestyle as the wife of a billionaire husband. While she has not revealed the exact net worth she owns her husband Bill Koach has a net worth of around $1.8 billion, as of 2022.

Talking about her philanthropy, she is also involved in a few social works. Along with her husband, Bridget founded a school named Oxbridge Academy.