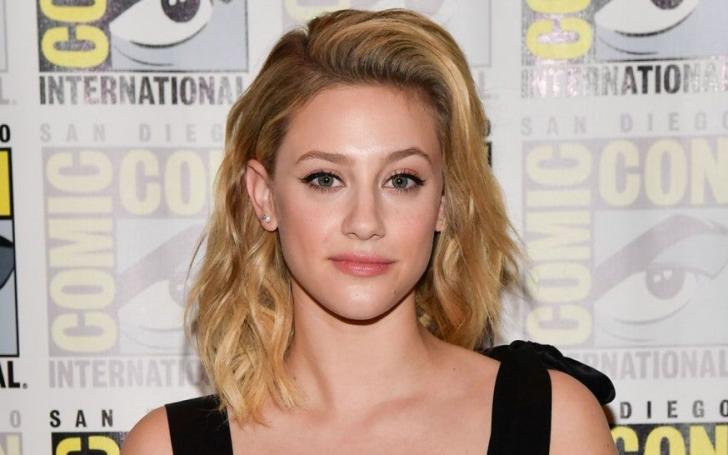 Lili Reinhart is an American actress best known for her work in the series, Riverdale. Ever since her work in the hit series, fans have been asking about her dating life. The term Lili Reinhart’s boyfriend is something that everyone searches for every once in a while.

Not long ago, the actress Lili was buzzing all over the internet, thanks to her relationship with her actor-boyfriend Cole Sprouse. However, the pair has since called it quits and moved on with their lives. While Cole has made a few headlines due to his dating life, Lili has remained rather quiet.

So what’s the tea on her current relationship status? Is she dating anyone? If yes, then who is her boyfriend? Let’s find out!

Who is Lili Reinhart’s boyfriend as of 2022?

As of now, she isn’t dating anyone. The beautiful and talented actress is yet to be spotted with someone whom we can say is her partner.

That being said, she was once spotted with a guy back in December of 2020. As reported by DailyMail, she was spotted with a male friend of hers, as she jetted off from her trip to Vancouver. However, some times later the rumor of their affair simply died down.

Going through her social media profile, we can say she isn’t dating anyone at the moment. She seems to be enjoying her single life and as a fan, we couldn’t ask for more.

Moreover, Lili seems to be enjoying life, and ever since the introduction of someone special in her life, her life has changed for the better. As for who that someone special is, well, it’s her pet pooch, Milo, whom she rescued in February 2020. Reinhart shares a lot of pictures with her puppy.

Safe to say, Lili seems in no rush to date anytime soon.

She might be single right now, but previously Lili was in a relationship with her then-boyfriend, Cole Sprouse, one of the most eligible bachelor’s around. Initially, the pair started dating in early 2017 right around the time their series, Riverdale released.

At first, the duo didn’t really announce their relationship open to the general public, but all of us somehow had an idea that something is definitely going on between them. After dodging questions here and there, Lili and Cole finally made their relationship official in May 2018 by attending the Met Gala event as a couple.

Still, the duo didn’t really address their relationship officially and often evaded questions pertaining to their romance. But despite all the foolhardy ways they tried to keep their relationship behind closed doors, everyone knew they were an item.

Furthermore, when the pair appeared together as a pair in their second outing at the 2019 Met Gala event, all of us could say with confidence they were more than just friends.

At the time when Lili and Cole were still dating, the pair was one of the most followed and shipped couples. Their chemistry was undeniable and most of us even dreamed they might just end up marrying each other.

Unfortunately, fate had other ideas. After being one of the most iconic couples around, Lili and Cole decided to split. Although there wasn’t any official confirmation by the pair themselves, an insider first revealed the tragic news.

In July of 2019, a source told the news outlet, E! News, that the couple had called it quits in ‘earlier this summer.’

As we all knew Lili and Cole never really announced they were dating, at least officially. And upon hearing about the talk that has been going on related to her relationship, Lili bashed the whole media.

She wrote on her Twitter, at the time, “Don’t believe everything you read on the internet, kids.”

Whatever the case may be, Lili and Cole’s relationship somehow ended in the year 2019. Nevertheless, some reports then claim the duo was back together some times after their “apparent break-up.”

Sadly so, they finally called it quits in early 2020. Lili herself revealed the bad news saying they “initially separated in January of this year, deciding to more permanently split in March.”

What about Lili Reinhart’s other affairs? She is a bisexual

Aside from her relationship with Cole, Lili didn’t have any romantic link-ups with anyone. Seems like she never really found someone who was the perfect fit for her.

Besides, many of you might not know that Lili is a bisexual. Initially, she came out as a bisexual in June of 2020 after sharing an Instagram post. In the post, she mentioned joining the Black Lives Matter protest organized by the LGBTQ+ community.

Lili wrote in the caption, “Although I’ve never announced it publicly before, I am a proud bisexual woman. And I will be joining this protest today. Come join.”

Now that you know her sexuality, don’t be surprised to hear about Lili’s girlfriend in the future.

Also, follow us to know more about celebrity affairs.