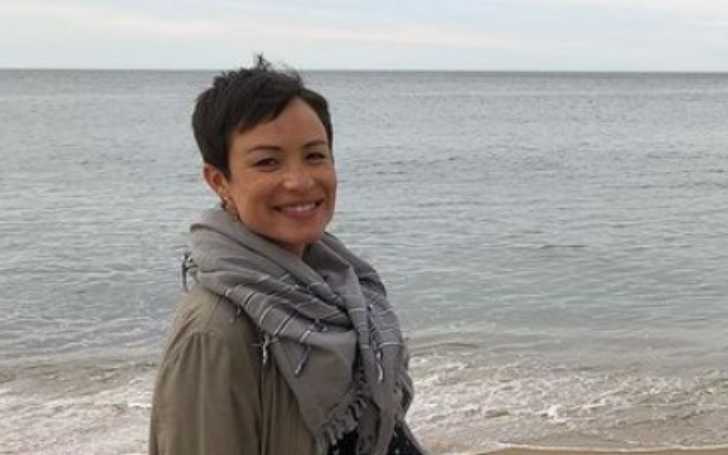 Lilian Matsuda is an American marketing manager. She is primarily popular as the wife of American actor Nick Gehlfuss. Lilian’s husband is widely famous for his roles; Dr. Will Halstead in the Chicago franchise series and Robbie Pratt in Shameless.

Unlike other celebrity spouses, Matsuda prefers living a low-key life without media interference. However, this does not stop the public to want to discover more about their favorite actor’s life partner.

So, here we will provide you with every detail about Nick Gehlufuss’ better half Lilian Matsuda. Read the article to kill your curiosity about her age, husband, marriage, children, net worth, and more.

Who Is Lilian Matsuda? Her Wiki-Bio, Age, & Ethnicity

She grew up in her hometown with her parents. Her nationality is American, and as far as her ethnicity is concerned, she belongs to a mixed racial group. She has Asian and American heritage.

The 37 years completed her primary education at a local school in the United States. She then attended Otterbein University and graduated earning a Bachelor of Fine Arts degree.

For her further academic qualification, Lilian studied master’s in public health from the University of Illinois Chicago.

What Does Lilian Matsuda Do For Living?

Talking about her profession, Matsuda is a marketing manager. Back in 2010, she started her career as an assistant project manager for the constellation brand, SVEDKA Vodka.

After that, the celebrity spouse joined Viceroy Hotel Group in 2012 and served as a special projects manager for the first seven months and worked as a marketing and communication manager. In the year 2014, she got a promotion and performed as director of product marketing till August 2015.

Other than the marketing manager, Lillian is working as the Director of Advocacy at Illinois Action for Children. For the non-profit charitable organization, she initially worked as a policy associate (Oct 2019 – Dec 2021) and is serving as a director of advocacy as of now.

Gehlfuss is a Cleveland-based American actor hugely famous as Dr. Will Halstead on the NBC medical Chicago Med. After earning an MFA degree from the University of  Missouri-Kansas City, he started his career in the entertainment industry with commercials in the year 2007.

Furthermore, Nick’s other notable work credits include The Newsroom, Shameless, Murder in the First, Equity, and Love & Mercy. Besides that, he also had guest spots on several TV series like It’s Always Sunny in Philadelphia, Royal Pains, Person of Interest, and The Good Wife.

When Did Lilian Matsuda And Her Beau Nick Gehlfuss Started Dating?

The marketing manager Matsuda and her husband Gehlfuss were in their late 20s when they first met each other. The couple reportedly had their first encounter in the year 2013 and immediately started dating.

After dating for almost a couple of years, they decided to tie a knot.

Their Wedding Details: They Married After Two Years of Dating

Lilian and Nick had a grand but intimate wedding after being together for two years. The couple secretly exchanged rings on the 13th of May 2016 at Brookside Farm Louisville, Ohio in front of their family and close friends.

A few days later, Gehlfuss surprised his fans and media by disclosing the news through his social media. He uploaded his wedding photos on May 15 making a lovely caption from the writing of H.Lawrence.

Looking at their marriage pictures, Lilian was looking irresistible in her white wedding gown whereas Nick looked stunning in his black outfit. As per reports, the actor gifted his bride beautiful pearl earrings for their big day.

Matsuda and Gehlfuss first disclosed their nuptial news to People magazine. The Shameless actor recalling his special day revealed he wanted his cast mates to be a part of his close affair but as they were a franchise it did not happen. He said:

“I intended to invite a lot of my cast mates, but because we’re a franchise, I would have had to invite the entire Chicago franchise. I started on P.D. and I went to Fire, and now with Justice, it would have been crazy.”

The Chicago franchise actor said, it rained on their wedding morning and the rest of the day just went perfectly. Following their nuptials, Nick spent a part of his honeymoon promoting the series Chicago Med inNew York. Also, the couple had a plan of visiting Japan, a country his wife is familiar with as her mom is part Japanese.

The star couple who got married in 2016 is now a parent of an adorable baby boy. They together welcomed their first child, a son in mid-December 2021.

The Director of Advocacy at Illinois Action for Children disclosed her pregnancy for the first time on April 14, 2021, via an Instagram post where she uploaded a mirror selfie flaunting her baby bump.

Two months later, she alongside her better half attended the Colombus Symphony’s live concert dedicating the day to their unborn baby and asked if he enjoyed his first live concert.

” I think my baby would laugh when you laugh. I will try to be as patient a mother as you were with me. I love you.”

As mentioned, the duo were blessed with a baby boy by mid-December last year. After the arrival of the little one, they finally got time for themselves in January and uploaded a photo captioning it as “Parents’ night out on Nick’s birthday.

As of 2022, Lilian Matsuda reportedly owns a fortune of $500,000. She primarily receives a good sum as a marketing manager.

Apart from her career, Matsuda also enjoys luxury as a celebrity spouse. Talking about her star husband, Nick Gehlfuss has an estimated net worth of $2 million. As he was the first main cast in Chicago Med, the actor has been receiving a salary of up to $110,000 from the series.

Is Matsuda On Any Social Platforms?

The 37-year-old runs an Instagram page under the name @fatyamas which has 6,476 followers in September 2022. Also, she is available on LinkedIn with 19 connections. Other than that, she is not active on any other social media platforms.

What Does JB Pritzker’s Wife Mary Kathryn Muenster Do For a Living? Untold Facts