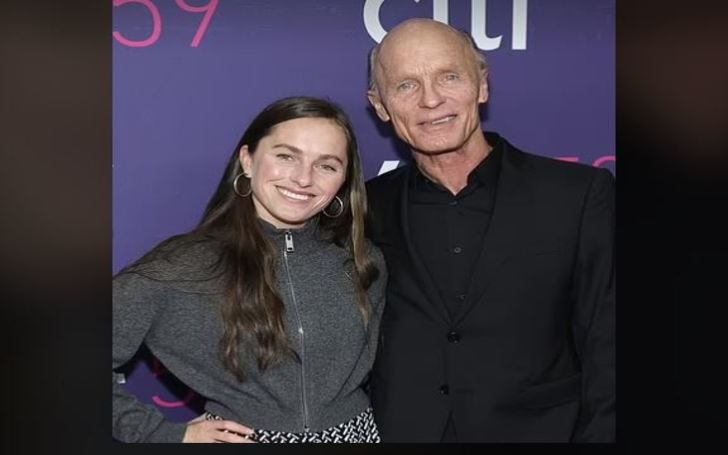 Lily Dolores Harris or Lilly Harris is the only daughter of actor Ed Harris and his longtime wife, Amy Madigan. Lily’s father has been in the acting career since 1975. He has received Academy Award nominations from his performances in Apollo 13 (1995), The Truman Show (1998), Pollock (2000), and The Hours (2002).

As mentioned, Lily is the only child of Ed and his wife who he has been with since the ’80s. Ed’s daughter is all grown up and carries a striking resemblance to her actor father. She is also striving to make her mark in Hollywood with several theaters and stage experiences.

So here’s the first of many writings detailing the early career and personal life of Lily Dolores Harris. Know how much does she share those acting love with her father. Also, read full disclosure of her life besides acting.

Lily Harris was born on May 3, 1993 (age 28 years). Her paternal grandmother Margaret (née Sholl), was a travel agent, and her grandfather, Robert L. “Bob” Harris (1922–2014), also Ed Harris’ dad sang with the Fred Waring chorus. He worked at the bookstore of the Art Institute of Chicago.

Her maternal grandfather, John J. Madigan (1918–2012), was a well-known journalist who worked for Newsweek magazine. Lily got her middle name from her grandmother, Dolores (née Hanlon; 1921–92), who was an administrative assistant and amateur actress who performed in community theatre.

Ed and Amy’s daughter, Lily graduated from Reed College, Portland, Oregon with a degree in English. Next, she decided to pursue a career in teaching, academia, and horseback riding, but ultimately landed on acting.

After college, she spent some time doing theatre at Portland as well as some stage gigs. Some of the credits in the genre include a solo version of Sarah Kane’s 4.48 Psychosis and Mark Antony in Julius Caesar.

She also studied at the American Conservatory Theater’s MFA Acting program. She learned about A.C.T.’s MFA program from a friend. Eager to improve her craft, the Los Angeles native auditioned and managed to get into the class of 2020.

Lily says she discovered her love of acting through Shakespeare. She is also reportedly a fan of horses, medieval literature, and earl grey tea.

She had her first screen appearance in the 2009 short film, The Three Labors Of Oliver. In the movie directed by Matt Feener, Ben Guaraldi, and Desiree McMahon, Lily portrayed the character of Hayden, the female twin.

Three years later, Ed’s daughter again starred in a short movie titled, What’s the 48? where she played the character of a babysitter.

What Made Her To Choose Acting?

While talking with the American Conservatory Theater, Ed Harris’ daughter revealed what specifically made her shift her interest from academia to performing arts. She explained she has always been much more confident in sharing herself with others. She said she also believes acting gives permission to show parts of herself which she wouldn’t have been able to feel comfortable sharing in everyday life.

In October 2021, Deadline reported that Ed Harris’ daughter, Lily Harris was about to be on the cast of NBC medical drama, Chicago Med. And so Lily made her professional acting debut in the Nov. 3 episode in the role of Astrid Meadows, a young patient with hallucinations. It was the show’s seventh episode of the seventh season, the title being, A Square Peg In a Round Hole.

She plays one of the patients and her rare condition causes some dissent among the staff as to what the best line of action is.

Lily’s parents, Ed, and his wife, actress Amy Madigan have been together for more than 36 years.

They met in a rehearsal for a play in which both of them were about to act. The year was 1980; Amy saw Lily’s father, Ed when he was performing on stage in the play “Cowboy Mouth” by Sam Shepherd.

Amy later admitted seeing the Rock actor that day felt like something from a movie scene or a music video, and that she knew then that they would meet again, which they did a year later.

The second meeting between Ed and Amy took place on the set of “Places in the Heart.” Ed said he complimented Amy’s socks, and they soon began dating.

The actor couple, who are also of the same age married in 1983. Lily’s parents at the time were both starring together in “Places in the Heart” and the nuptials took place in Waxahachie, Texas. Two years later they would again become co-actors starring in the movie “Alamo Bay.” Together, Ed and his wife have worked in nine films and multiple stage productions.

Decades after their wedding, Ed and Amy welcomed their only daughter, Lily Dolores Harris.

Of her birth, Lily’s father said it certainly helped him and his wife mature as human beings. He revealed that they became a little bit more responsible for someone other than themselves. The Westworld star added he and his partner were out partying pretty hard before Lily was born.

Ed admitted it got to the point where he had to sell his motorcycle. He eventually stopped drinking as much, calmed down, and started thinking about his daughter.

Lily Harris’ mother, Amy Madigan, much like her husband is also an Academy Award nominee. She earned the nod and subsequent recognition for her role in Twice In a Lifetime (1985). Her other notable films include Field of Dreams (1989), Uncle Buck (1989), and Gone Baby Gone (2007).

Lily Dolores Harris Once Talked About Having A Boyfriend

During the same interview with ACT, Lily Harris talked about her partner, possibly her boyfriend. When asked about her interests other than theater and acting, Ed and Amy’s daughter said,

I live with my partner and our incredible, adorable dog Beau, and I don’t know where I’d be without them.

She though didn’t mention who her partner was or give his/her name. She, however, in Halloween 2021, through her Instagram shared a picture of a man albeit face semi-covered. The imaging came along with montages of other Holloween-themed pictures. It is believed her boyfriend could be the very guy. Yet, Lily has refrained from talking about her personal life in any manner.

Lily also said she loves to read, primarily fantasy and magical realism. Whilst talking about her other means of entertainment, she also talked about her love for horseback riding. She revealed it was a huge part of her life for a long time, though said that she doesn’t get to do it as often now.

Unlike her father who has a whopping net worth of around $25million, Lily probably might not be in the two comma club. It’s clearly hard to say she could be anywhere as affluent as her father considering her few to no notable acting credits. Additionally, there also isn’t an approximation to where she stands financially.