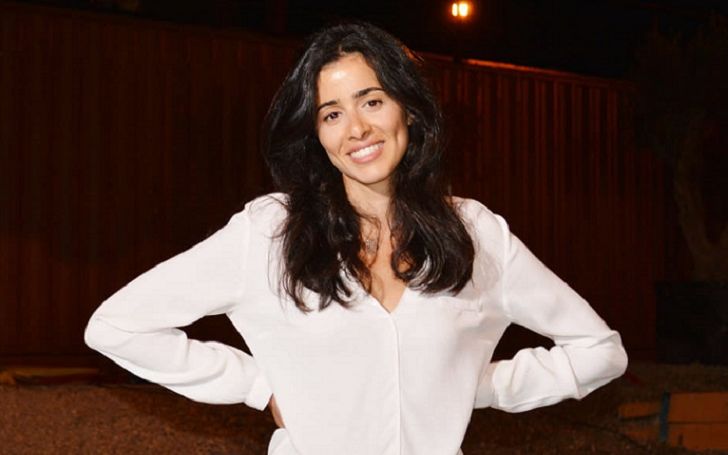 Lina Lazaar is the finest art critic who was named as one of the ‘Top 10 Most Influential Women in Middle Eastern Art’ for her great contribution to the Arab artistic world. But, Lina gained huge attention after her ex-billionaire-husband Hassan Jameel began a romantic relationship with Barbadian pop queen Rihanna.

Tabloids say Hassan already separated from his former wife long before his encounter with the singer. However, his high-profile relationship with Rihanna also didn’t go for long. But what is Lazaar’s current relationship status?

In the meantime, let’s also explore her strong family background and more here!

Who are Lina Lazaar Parents? Has two Siblings

Lazaar is the daughter of Kamel Lazaar and Soumaya Lazaar. Her parents tied the knot back in 1980 and they were in a marital relationship until they separated in 2009. She grew up along with her two siblings named Rayan Lazaar and Bashar Lazaar.

As for her age, Lina is aged 38 as of 2022. She was born in 1983, in Carthage, Tunis, Tunisia. She is Tunisian as per her nationality and belongs to the Caucasian ethnicity.

Lina spent the major portion of her childhood in Geneva before did make her move to London for her education. She there attended the London School of Economics and obtained an MA in Statistics. After there, the art lover went on to join Sotheby’s Institute of Art and graduated with an MA in Art History. In the meantime, Lazaar also became a specialist in Post War and Contemporary Art at Sotheby’s London.

Her father Kamel was the only one who initially inspired Lisa to pursue a career in the artistic world. Kamel, 69, is one of the successful investment bankers who founded an investment bank Swicorp in Riyadh. In addition, the banker is also known for his great contribution to the philanthropic world.

He is the founder of Kamel Lazaar Foundation (KLF), which was established back in 2005. Headquartered in Geneva, the Foundation operates under Swiss law. It has also branched out in London and Tunis. Besides, Lina serves as the president of the organization.

According to the foundation’s official website, KLF mostly supports artistic and cultural projects in the MENA region. In addition to KLF’s specialization in culture and contemporary arts, the organization is involved in many projects that are linked to heritage and educational sectors.

Lazaar told about KLF in an exclusive interview with Harper Bazar,

“Today, KLF continues to develop one of the largest visual arts collections in the Arab world, an ambition to establish a dedicated contemporary art space in Tunisia, but equally importantly, it is actively supporting knowledge production, through Ibraaz, artistic production, through a cultural hub, in the village of Utique, and at the same time, providing grants focused on education and community building.”

Lina Lazaar’s Career as an Art Critic and Curator

Shortly after her training from Sotheby’s Institute, Hassan Jameel’s ex-wife organized Sotheby’s first-ever auction of Arab and Iranian contemporary art in 2006. She then curated The Future of a Promise exhibition at the 54th Venice Biennale in 2011. The exhibition also became the arts organization Beinnale’s first Pan-Arab exhibition of contemporary art.

Furthermore, Lina curated The Absence of Paths exhibition in 2017. It was her first pavilion at the Venice Biennale. The exhibition describes as “a human performance staged across Venice which, for the duration of the Biennial, represents an idyllic microcosm of the world: a place where human beings may still flow freely from one nation to the next.”

As per JAW’s FB page,

“JAW comes at a time when the world is increasingly looking toward the Middle East for emerging creativity. In bringing together local talent, with the support of international participants, JAW will deliver a week of events that will engage the community in a celebration of the variety of visual and cultural practices that Jeddah’s art scene has to offer.”

Is the Founder of Jaou Tunis

Lina formed the participatory cultural event called Jaou Tunis in 2013. Before launching Jaou, the curator assembled a number of groups that include artists, collectors, gallery owners, and more. She also organized seminars to promote culture and contemporary art at the time.

Talking about Contemporary art, Lazaar once said it is a “medium that enables for a dynamic expression and one that I have found to be an honest arbiter of the most complex discussions in the most challenging environments.”

Jaou’s main aim is to promote the culture and art of the Maghreb and the Middle East at an international level. In 2015, Lina curated the All the World’s a Mosque exhibition at JAOU.

In addition to that, the ex-celebrity spouse also works at Banque Nationale Suisse.

Lina Lazaar’s Ex-Husband is Rihanna’s Ex-Boyfriend Hassan Jameel: How long they were married?

The art critic was previously married to Saudi Arabian businessman tycoon Hassan Jameel. The former duo tied the knot back in 2012. Their lavish wedding ceremony took place at the Paris Opera House.

Although their marriage attracted huge media attention, the pair never openly talked about it. A close source told The Sun, “Hassan is an intensely private individual.”

Nonetheless, their relationship couldn’t be last long and they went their separate ways after they were into a relationship for five years in 2017. The exes also didn’t share any children.

Soon after their separation, the Saudi billionaire romantically linked to legendary singer Rihanna.

An insider told The Sun that Hassan’s marriage to Lina was already ended long before the businessman came across Rihanna.

“His marriage was over before he met Rihanna, after getting a divorce from Lina, but it will still come as a shock to her millions of fans. Lina has also moved on with a new partner.”

Additionally, a close friend of Rihanna also disclosed that the singer already knew that her new boyfriend was freshly divorced but it doesn’t matter.

The duo was first spotted together in Spain. Subsequently, the former iconic pair enjoyed a family vacation in Italy. Later on, they also appeared at a Lakers game, on a balcony in Paris.

Hassan dated his singer-girlfriend for three years before they broke up in 2020.

Does Lina Lazaar Have a Boyfriend?

Over the past several years. Lina has kept most of her personal details behind closed doors. Sources say the art critic moved on with her new beau just after her divorce from her first husband Hassan. A source told the tabloid at the time, “Lina has also moved on with a new partner.”

But, the curator never disclosed the identity of her mysterious beau, neither yet to come out with any of her relationships.

Also Read, Erin Sutton: Everything You Should Know About Paul Stanley’s Wife

Lina Lazaar’s net worth is $1 million as of 2022. She predominantly makes money through her artworks. She currently resides in Zürich, Switzerland.

On the other hand, her ex-hubby Hassan, who belongs to the 12th richest Arab family has an estimated net worth of $1.9 billion.