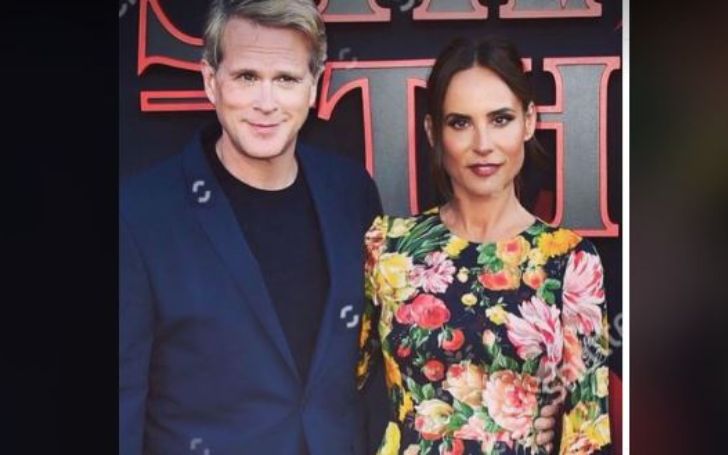 Lisa Marie Kurbikoff is an ex-stills photographer who is also known as the wife of the English actor, Cary Elwes, Westley from the 1987 American fantasy adventure comedy film, The Princess Bride. Cary and Kurbikoff have been married since the early 2000s. As an actress, Cary’s wife has had behind-the-scenes credits in films including Wonderland, The Cool Surface, and Rent Control.

Fans will always remember Cary as the knight in shining armor who went through so many troubles to get to his love. And he also was somewhat of a gesture of love for the 80s era. Further, having started his career in the late 70s, Cary is still busy with a few or two acting jobs. However, Elwes’ real-life princess, Lisa Marie Kurbikoff has been well off the spotlight despite all the years she has been Cary’s wife.

Although Elwes’ off-the-screen Princess Bride story might not be just as adventurous as the movie, he has quite a lasting and strong bond going on with his wife, Lisa starting from the early 90s. So, learn what else there is to know about her down in the article. Also, know her history; her early life, parents, siblings, how she met Elwes, their children, and further.

Lisa Marie Kurbikoff Is From Agoura Hills; A Bit About Her Family

The longtime partner of Cary Elwes, Lisa Marie Kurbikoff was born on May 9, 1971, in Agoura Hills, California.

While not much about her family is known, according to Facebook, Cary’s wife at least has three sisters, Donna, Darlene Wynn, and Janet, and a brother, Peter A Kurbikoff Jr. Also one of her sisters, Janet apparently is her twin.

Lisa is the daughter of Sandra Carol Kurbikoff and Peter A Kurbikoff. Kurbikoff’s mother, Sandra, a native of Westlake Village, died in March 2015.

It is presumed her father originally is from Bridgeport Connecticut.

Although it is unclear in the present what Cary’s wife, Lisa is doing, in the past, she used to be a photographer.

Kurbikoff used to shoot for the MTV car customization reality series, Pimp My Ride. Her then works were also featured in AutoWeek magazine.

The Agoura Hills native has also shot for Robbie Williams’ “Greatest Hits” in addition to other artists like rapper Xzibit. Her imagery works have also been featured in The Miami Herald.

Has Kurbikoff In Any Films?

The stills photographer Lisa met the Saw actor Elwes in 1991 at the annual Malibu chili cook-off.

Cary says meeting Lisa was his real-life fairy tale romance. When he saw her, Cary was holding a handful of tickets for some rides. Shortly after noticing Lisa, the British celebrity asked her to join him on the rides which she agreed to. Elwes apparently left quite the impression on Lisa the first time she met him.

They however waited a couple of months before going out on a first date.

Marie and Elwes got engaged in Dec 1997 in Paris. The London-born actor proposed to Lisa in the Eiffel Tower inside the Le Jules Verne restaurant. Because of this reason, Cary once revealed the French capital is his favorite destination. The now 59-year-old actor said the place is also very close to his heart.

Kurbikoff and Cary married each other on June 25, 2000. Seven years later, they would welcome a daughter, Dominique on April 24, 2007.

During another interview, Elwes said meeting and falling in love with his wife, Lisa was the most Westley-like moment in his own life. Something within the same spectrum is also the birth of his daughter. In fact, being the father of Dominique, Elwes says is his best achievement on the planet.

The couple along with their only child, Dominique allegedly reside in Malibu, California. The Westminster native, Cary once revealed he had always dreamed of living in beach city since he first visited it when he was a kid with his family. Elwes apparently got hooked on Malibu since it also happened to be the place where he first met his wife.

Lisa And Her Spouse, Cary Are Both Fans Of Netflix’s Stranger Things

Apparently, both Lisa and her actor husband have been long-time fans of the Netflix supernatural adventure series, Stranger Things. The couple in fact, also ditched a lot of their other plans so that they just couldn’t stop watching the Millie Bobby Brown starrer show.

Stranger Things, admittingly, is the only show that Cary binge-watched with his wife. Lisa’s baby father apparently wasn’t somebody who was fond of watching shows in one sitting.

Fortunately, when the call came from the show creators, the Duffers’ brother, and subsequently the offer to be in their show, Kurbikoff’s spouse obviously said yes.

Cary during an interview revealed to have a part in the show really meant a lot to him. Elwes’ character on the Netflix hit series, Larry Kline is a recurring antagonist in the show’s third season.

Although Lisa might not be in showbiz or among the interest of media, the longtime wife of Cary Elwes is fairly in sharing mode with her Instagram and Facebook posts. The brunette Californian woman’s feeds mostly include the family pictures that she takes has taken with her husband and her daughter, Dominique.

Her social media posts also show some TBT moments that she has shared with actor-spouse, Cary Elwes. Lisa also often mentions her late mother and her siblings via her Instagram as well as Facebook. On the latter she additionally gives her say on burning entertainment as well as the geo-political news and matters or just shares them with her friends.

Will There Be A Remake Of Lisa Husband’s Hit Film, The Princess Bride?

While there were few excitements, most of the film’s fans expressed their outcry over the news of the remake. In fact, the suggestion to reboot the movie also prompted Elwes to respond.

A day after Variety reported the news, Cary on Twitter addressed the issue, and wrote,

“There’s a shortage of perfect movies in this world. It would be a pity to damage this one.”

The particular Tweet from the Robin Hood actor later went on to amass over 500,000 likes. Many took it as a conclusion that the majority of the movie fans and Lisa’s husband, Cary were on the same page when it came to the remake of The Princess Bride.

Who Is Sebastian Vettel’s Wife Hanna Prater? Her Career, Net Worth, & More