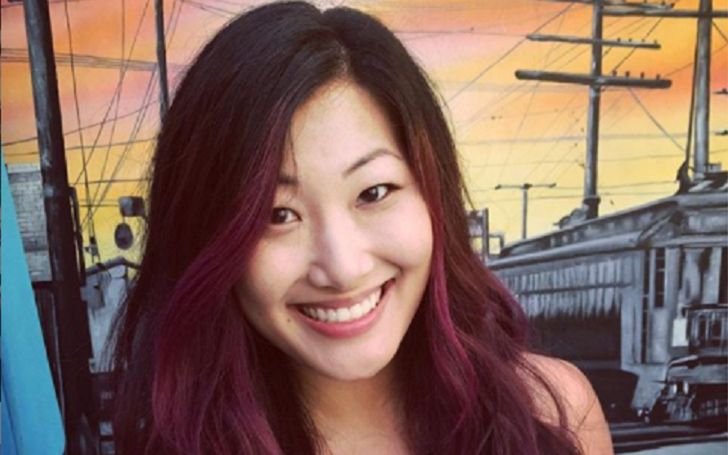 Lisa Marie Tasker is known as a longtime partner of the actor Eric Lloyd. Her boyfriend has worked in several movies and TV shows, especially his breakthrough performance in the highly successful Disney’s The Santa Clause film trilogy brought him tremendous fame.

Talking about their love story, the power couple is leading a happy relationship for years now. Apparently, numerous tabloids also say Lisa and Eric already got married- is it true?

Here are several unexplored facts about Lisa including her family background!

Who is Lisa Marie Tasker? Her Parents and Twin Sister

Lisa was born in September 1989, in the United States. She has a twin sister named Lainee Young. They both are super close to each other and often share their photo on social media on various occasions such as birthdays and National Siblings Day.

On the other hand, the detail of their parents is, however, a little bit unclear. But, the twin sisters frequently share pictures of their father and mother on their Instagram.

Back in Jan 2014, Lisa shared a family photo celebrating her dad’s birthday.

Besides, Tasker has an American nationality and belongs to Korean American ethnicity.

Lisa Tasker Relationship With Eric Lloyd: How Long Have They Been Dating?

The couple has been in a romantic relationship since 2015. Lisa revealed her first date by uploading her boyfriend’s throwback photo from the day of the first date in October 2018. She wrote on the caption they went to Hollywood to eat dinner at a taco stand and later moved to DTLA adventures.

Besides, Eric and Lisa were also on a break for a while but now their love story is sailing pretty smoothly. The couple often shares beautiful pictures on each other’s social media handles, especially Lisa’s Instagram account has flooded with their images.

In September 2017, Tasker posted a photo with her bae in the honor of their two year anniversary with a lengthy message. She wrote,

“I never imagined I’d get to live the life I was too afraid to dream of. This week I got to be a production designer, a camera operator, and work with @ericlloydmorelli to transform the stage for a 3 night jazz event hosted at @lp__studios this weekend. I couldn’t be prouder of what we accomplished together and am so happy we spent the 2 year anniversary of our first date working side by side towards our dreams”

Besides, the duo also appears together in various beautiful places and often attends big events too. Back in April 2017, they were seen enjoying their time at Coachella Music and Arts Festival.

Is Eric Married to Lisa Marie?

There are a number of tabloids that say the couple has been married for several years. However, it’s false news. In fact, the two are yet to tie the knot and Lisa still mentions Eric as her boyfriend. Furthermore, they also never talked about their wedding.

The two are in a live-in-relationship for a few years now and currently reside in Los Angeles, California.

Do you know TobyMac wife Amanda Levy McKeehan? Here are Interesting Details About Her

The Couple is a Dog Lover

Lisa and Eric both love puppies. If you once visit their Instagram then you will definitely know about their unconditional love for dogs. They have three pooches Addi, Milo, and Cooper.

What Does Lisa Marie Tasker Do?

Eric Lloyd’s girlfriend is an avid painter who has a separate Instagram account called cam__creative for her artwork. Besides, Tasker is also a music lover and currently works at her boyfriend’s Lloyd Production Studios Film, a Music Production & Post Production Studios.

Some Other Interesting Facts About Lisa

As a child, Tasker used to play the violin. She is also a lifelong fan of Paramore, a rock band formed in 2004. The current members of the band are lead vocalist Hayley Williams, drummer Zac Farro, and guitarist Taylor York.

Apart from that, Lisa is a health freak who loves yoga and does exercise on a regular basis.

Eric was born on 19th May 1986, in Glendale, California to Melissa and David Morelli. He also has a sister named Emily Ann Lloyd. Emily is also an actress who rose to prominence after her role in the hard-hit docudrama film Apollo 13.

Eric landed his first acting gig at 18-month. He made his professional debut playing Young Kevin Arnold in The Wonder Years in 1989. He also appeared in Laurie Hill in 1992.

A year after, the then child actor also scored his first big-screen role as young Robert Downey Jr. in 1993’s drama film ‘Heart and Souls.’ Lloyd gained wide attention following his child character of Charlie Calvin in the holiday classic The Santa Clause in 1994.

He also respired the role in its trilogy The Santa Clause 2 in 2002 and The Santa Clause 3: The Escape Clause in 2006. The film series collected around $470 million at the box office worldwide against a budget of $99 million. He last featured in a movie was in a 2011 Chrome Skull: Laid to Rest 2.

His TV credits include The Busy World of Richard Scarry, A Christmas Memory, and Rocket Power. He is now the co-owner of LP Studios. He co-founded the company along with his college roommate Tyler Payne. It is located in Glendale.

Lisa Marie Tasker’s fortune is $200,000. Besides, her longtime partner Eric has a net worth of $1 million at present. He earns money from his acting career.