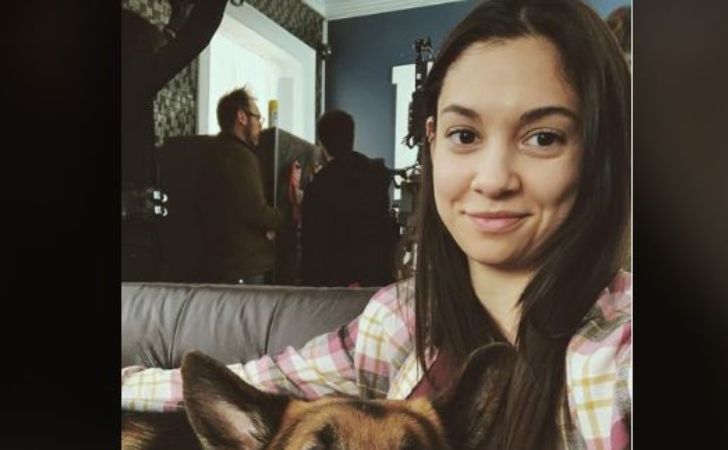 Madison Cheeatow is a Canadian actress who is known for her role as Jade Virani in the CBC ranch drama series, Heartland. She is also known for films like The Last Christmas (2021), Ruby Skye P.I.: The Haunted Library (2012), Anna (2020), the Ruby Skye PI franchise, and others.

While Cheeatow isn’t a frontline star in the CBC long-running family drama series, over the years, she has managed to bag more than considerable attention. Despite having an unsteady screen time in Heartland, some of the show fans have often given thought to what her life besides the on-screen horses looks like.

Scroll through the notable chapters and verses of Madison’s life; her story prior to Heartland, how she landed the role of Jade, her personal life, & her partner, among others.

She apparently is one of the three children of her parents, a brother, Aiden, and a younger sister named Adelaide. While not much about her father is known, Madison, on a few occasions, has mentioned her mother, Margot LeBlanc, on her socials.

The Toronto-born actress, Cheeatow has been married to Chris Spoke since Dec 2017. Madison’s husband apparently is the founder and CEO of August, a boutique agency that designs and builds digital products.

The company reportedly also hosts a regular speaker series. Together, Madison and Chris are parents to three kids, Isla, Noah, and a third one whose name though the Ruby Skye PI actress is yet to reveal.

Cheeatow had her first child, a daughter named Isla in early April 2018. Almost two years later, the actress welcomed her second baby, a son, Noah in April 2020. She and her husband, Chris added one more child in June 2022.

Madison Became A Mother At 24

Madison Cheeatow became a mother at quite a young age. She had her first child at 24. By the time Madison was 26, she was already on her second kid. Cheeatow admits her first pregnancy was rather unexpected.

In an interview, she confessed that she and her husband had thought of having a child someday but not that early. The Dance actress admits she was not entirely in preparation for her first child. She though says it has been pretty well with both of her children.

While she welcomed her first child at a birth center, Madison birthed her second kid at home partly because of the quarantine 2020 and also because the actress during an interview said she wanted to. In June 2020, Cheeatow revealed she was planning on sending her kids to regular schools instead of homeschooling.

Madison Cheeatow Acting Career; Her Other Movies And Series Besides Heartland

Toronto native Cheeatow first stepped into acting in the late 2010s acting as Byrde in the short movie, The Dance. The same year, she starred in the family mystery film, Ruby Skye PI.: The Spam Scam as Ruby Skye.

She would reprise her role of Ruby in the series adaptation as well. Madison would portray the very character two more times for the Ruby Skye franchise in 2012 Ruby Skye PI – The Haunted Library, and the 2014 film, Ruby Skye PI – The Maltese Puppy.

In the meantime, in the year 2013, Cheeatow would also land her famous role as Jade Virani in the CBC’s Heartland. Following some series and TV movies, Cheeatow would land her second movie role in the 2016 film, Sadie’s Last Days On Earth as Dee.

Next, Madison portrayed Keira throughout 2017 in the Canadian-American television drama-anthology series, Slasher. Her next acting credit was as Jade in the digital companion show, Hudson.

Cheeatow was once more a recurring character in another series, Hudson and Rex in the year 2019. She was also among the casts of another series, Private Eyes. Madison has also been a few or two short films namely Intro, Anna, Heartbreaker, and The Last Christmas.

How Madison Cheeatow Got Her Heartland Part?

Cheeatow in Jan 2013 revealed the audition process of Heartland – being just like any other audition. She revealed the run-through took place in her native Toronto.

Apparently, when she originally signed up for the role, it was supposed to be for a one-episode spot. While there was a possibility for a second episode, Cheeatow would end up being in the show for more than 30 episodes.

Cheeatow once said Jade being a bronc rider is the most that she enjoys about her Heartland character. The mother of three thinks it’s super badass.

In June 2022, the CBC announced the sixteenth season of Heartland – set to release in the fall. The show apparently is returning with 15 episodes each approximately 1 hour long.

While no official statement about the casts for the new season has been made, the series’ veterans Amber Marshall, Michelle Morgan, Shaun Johnston, Alisha Newton, Gabriel Hogan, and others are more than likely to return.

The series’ regulars like Madison, Katie Fleming Morris, Ruby, Nathaniel Arcand, Aidan Moreno, and others are also likely to reprise their roles at least to some extent.

Cheeatow Might Make A Film Of Her Own In The Future

Madison once revealed she would like to produce, create, and direct a project of her own in the future. In fact, the Wingin’ It actress at the time, also said how she was actually writing something in between her day jobs as an actress.

The Good Witch actress Madison is overtly in play on social media be it Facebook, Twitter, or Instagram. Cheeatow for the most part though is more upfront on the latter. In fact, it has been a while since the Heartbreaker actress has gone quite apparent about her life (on and off the screen) in almost every respect on the image-sharing handle.

Her Instagram feeds abundantly include the stills of hers, her children, and her husband. She also occasionally shares sneak peek of behind-the-scenes activities from Heartland or pictures of herself hanging out with her co-stars and friends.