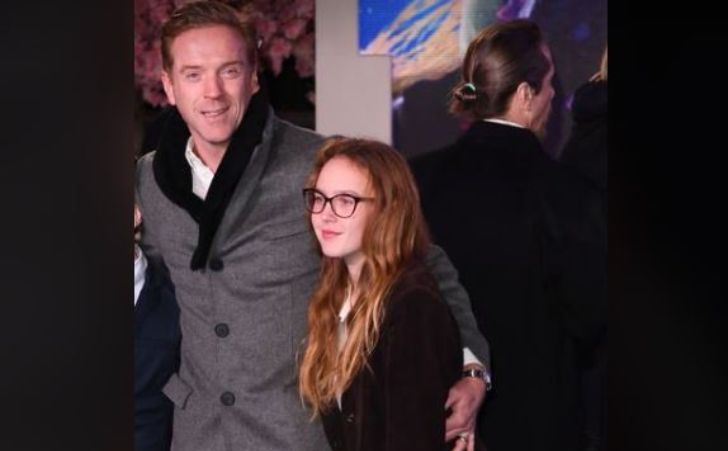 Manon McCrory Lewis is the teenage daughter of the British actor, Damian Lewis and his late wife actress, Helen McCrory. His father, Damian is known for his roles including U.S. Army Major Richard Winters in the HBO miniseries Band of Brothers, U.S. Marine Gunnery Sergeant Nicholas Brody in the Showtime series Homeland, and Bobby Axelrod in the Showtime series Billions.

Manon is the first child of Helen and her husband, Damian. Know all about the growing teenager in the write-up below; her life as a celebrity child, if she is just as popular as other Gen Z over TikTok and Instagram, and all.

Manon was born through a c-section in Sep 2006. McCrory in Oct 2006 told Telegraph Manon just like her father was ‘very easy and very calm’ as an infant.

Some of Manon’s ancestors include a doctor to the Royal Family, a naval shipbuilder, and a philanthropist. She is also of partial Sephardic Jewish descent. His paternal grandmother (Damian’s mother) died in a car crash in 2001. Damian and Helen’s daughter, Manon grew up near Sudbury, England.

Manon studied at St Christopher’s School in Belsize Park in North London. Her father, Damian Lewis in March 2013 threw his support behind a campaign to stop building works next to his daughter’s school.

As we said, her brother, Gulliver was born on the 2nd of November 2007.  At the time, Damian was playing Charlie Crews in the TV series Life. Gulliver is 14 months junior to her.

McCrory’s actress mother, Helen died on April 16, 2021, after what her husband, Damian called “a heroic battle” with cancer.

Later, Damian publicly announced the sad news of his passing, taking to social media to share an emotional tribute to his beloved wife. The red-haired actor wrote:

“I’m heartbroken to announce that after a heroic battle with cancer, the beautiful and mighty woman that is Helen McCrory has died peacefully at home, surrounded by a wave of love from friends and family.

“She died as she lived. Fearlessly. God, we loved her and know how lucky we are to have had her in our lives. She blazed so brightly. Go now, Little One, into the air, and thank you.”

On the occasion of the one-year anniversary of McCrory’s death, a memorable funeral service took place in March 2022 at London’s St. Paul’s Church in the posh district of Covent Garden.

Manon’s late actress-mother, Helen as an actress was mostly known for playing Polly Gray in Peaky Blinders. Helen, who was part Welsh had a notable career both stage and screen.

She played Narcissa Malfoy in the Harry Potter series, Cherie Blair in two films, 2006’s The Queen, and again in the 2010 film The Special Relationship.

Her other films include Charlotte Gray, Hugo, and Skyfall. In 2017, the actress received an OBE in the 2017 honors list for services to drama.

Helen’s Last Message To Her Daughter, Manon, And Son, Gulliver

Sometime after the death of Manon and Gulliver’s mother, Helen, actor Damien, in April 2021, shared his wife Helen McCrory’s message to their children before her death.

Turns out she tried to help her kids come to terms with her passing and instructed them “don’t be sad”.

“She’s left our beautiful children, Manon and Gully, too early, but they have been prepared for life. They have in them the fearlessness, wit, curiosity, talent, and beauty of their mother.”

Lewis said his late wife exhorted him and their children to be courageous and not afraid. Helen reportedly advised her children, Manon and Gulliver to not be sad. She apparently told them while she was about to go she’d lived the life she wanted to.

Manon’s actor-parents, the late Helen and Damian enjoyed an 18-year romance after meeting when they performed in a production of Five Gold Rings together at London’s Almeida Theatre in 2003. In 2015, Helen revealed that it was Damian’s ability to make her laugh that first attracted her to the Billions actor.

Damian and Helen tied the knot in a low-key Kensington and Chelsea registry office in 2007 within the circle of their closest friends and family.

Since Helen was pregnant with Manon, the Skyfall actress and Damian initially decided to wait until after her birth to tie the knot. The British pair welcomed their first child, a daughter Manon in 2006 and son Gulliver the following year.

Helen Didn’t Allow Manon And Her Brother To Use Technologies

Helen once forbade Manon and her brother from overusing technology as she feared they would be unable to express themselves. Apparently, McCrory during the year 2015 didn’t allow her children from using computers throughout the week and only let them use them for 10 minutes on weekends.

At the time, Manon was nine and Gulliver was eight. Their mother said the reason she restricted them from using technologies was that she wanted her children to have less interest in staring at a computer screen and more interested in talking to people and their parents.

Helen also wanted her and Gulliver to actually experience the putting the ink in the pen, putting the pen to paper, thinking about what they are going to say, and looking up the words they want to say. McCrory also feared by using technologies her children would grow up in a society that is all about instant gratification.

She said how she didn’t want her kids growing up wanting to be perfect beings in a perfect world. However, later, in Aug 2019, Helen McCrory admitted she was then struggling to keep her two children from spending too much time in front of screens.

With Times2, Helen said since her kids grew a bit older, limiting their screen time became more tricky – and ‘not going so well.’ Part of the reason, McCrory said was her kids had to actually use them to communicate with their friends.

When she was alive, Helen was worried her children would develop American accents as their father, Damian did some of his roles.

The English-born actor and the father of two had adopted the accent for his roles in hit American dramas Homeland and ‘Billions.’

Damian in Feb 2017 revealed his wife was then developing anxiety over the concern if her husband would transfer the intonation onto their children.

Damian at the time said while he never did [the accent] in front of Manon and Gulliver, their one-time school term in the US and the subsequent impact of it on their accent was something that had worried Helen.

While McCrory and Lewis’ daughter seems to have an Instagram handle, she though has set the account to private. It presumably is so because her mother once had shown her uneasiness over the possibility of her children becoming Instagram addicts.

Manon is also on TikTok; she has over 8000 followers with over 100k likes. She is known within Tiktok under the pseudonym manon.llllll. And she has featured her actor father, Damian, in one of her TikToks.

While it is not exactly sure what the occasion was, Damian and daughter Manon in this TikTok video are “suited and booted” as they did 12 seconds of dancing entertainment possibly at a family wedding.

While Manon’s father portrayed an egotistical billionaire in the Showtime show, Billions, the actor in reality has a net worth far less than the wealth of his TV character.

Nonetheless, since leaving ‘Billions’ during season 5, Lewis’ career hasn’t slowed all of a sudden and he has been a millionaire for years.

Considering his more than dozens of stage, film, and TV credits, it isn’t that much of a surprise Manon’s father has an estimated net worth of over $25million.

Worth mentioning is he is still reported to gross millions of dollars a year from acting. As such, by the time he was leaving Billions, Lewis was raking around $250,000 per episode.

What’s more, the actor also owns two properties: a Victorian townhouse in the London neighborhood of Tufnell Park, and another, quieter manse in the Suffolk town of Sudbury.