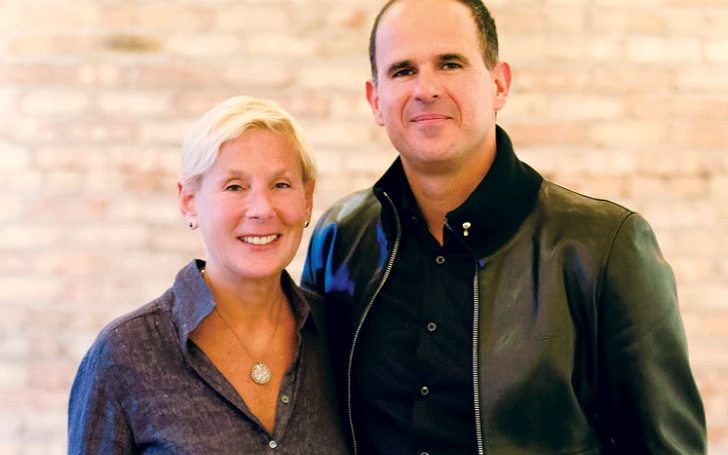 Not all relationships continue despite imperfections. However, the relationship between Marcus Lemonis and his wife Robert aka Bobbi Raffel is a prime example of an endearing relationship.

In spite of the substantial age gap, more than 20-years, the lovebirds have been together for years and lead a beautiful married life.

What’s the secret to their relationship? and by the by’s, who is Marcus Lemonis’ wife? Here are all the interesting facts about Marcus’s relationship and his second spouse.

Marcus tied the knot with Roberta Raffel (also known as Bobbi Lemonis) in Feb 2018. Explaining the moment, the Profits star told Page Six “I cried it was just a really special day. Nothing spectacular, very simple. It was just awesome.”

The couple organized their intimate wedding ceremony at Hotel Bel-Air, in Los Angeles. A very small group of their family and friends attended the event.

For their big day, the groom opted for a custom-made Gucci suit while his bride wore a silk gown. The couple, who follow different religions, i.e Christianity and Judaism, had both a priest and a cantor at the nuptials, in order to acknowledge their individual faiths & tradition. The newlyweds danced to the song ‘Looking for You’ from the show Empire. It is also their favorite song.

A day before the wedding, they organized a night party at Santa Monica’s air museum.

Initially, the duo had planned to marry a month before in January 2018 at the San Ysidro Ranch, in Montecito, California. However, they canceled the nuptials following mudslides and fires in Santa Barbara.

Talking about their honeymoon, they were unable to celebrate it just after their nuptials due to Marcus’ filming schedule.

How did Marcus meet His second wife Robert? When did they get engaged?

The pair first met at the COTERIE trade show back in 2016. It was a contemporary trade show for women’s fashion where Bobbi also visited for her individual business purpose.

Recalling their first meeting with People, Marcus said, “She tapped me on the shoulder and told me to get off my phone: ‘Hey, buy my business,’. ”

The popular businessman and television personality later acquired the fashion business Deerfield Boutique from her.

As of now, the couple owns an ML Fashion group that represents fashion brands and retailers. It was run by Stephanie Menkin who was previously on The Profit.

Although Bobbi isn’t into business just like her husband, the woman still has a great commitment to the corporate world. We can say their mutual interest played a major role in their initial bonding too.

Upon their initial meeting, they started dating. Subsequently, the couple got engaged during the 2016 Christmas season. Marcus surprised his then-girlfriend with a secret Santa gift, in which he hid the engagement ring.

Recalling the moment, Marcus said, “I proposed on Christmas in a secret Santa gift. Thank goodness it went to the right person.”

The Camping World CEO was previously married to Ila Penfold. The former couple exchanged their vows in 2003 in a private ceremony. The two ended their marriage after 14-years in 2017.

Lemonis and his ex-wife Penfold remained very secretive about their married life throughout their marriage; thanks to their ability to keep it all ultra-private.

The exes used to live in their Lake Forest mansion. They originally bought the property back in 2004 for $4.9 million. But they sold it for nearly 45 percent less than the purchase price for $2.7 million in August 2016.

While Marcus was still married to his first wife Ila, the businessman began an extra-marital affair with Bethenny Frankel, a reality television personality and businesswoman. Their dating rumors sparked when the two were seen together at the Apollo in the Hamptons charity in early August of 2015.

Sources close to the duo told People, they first met in the summer of that year,

“They met over the summer and they are having really good time they are seeing each other. He is an amazing fun guy. She is having fun. She’s happy. He’s smart and savvy and fun.”

It looks like Marcus’s apparent affair with Frankel might be the reason behind his split from his former wife. Regardless, their romance slowly faded away without any apparent reason. Frankel was married twice, first to Peter Sussman (1995-97) and later to Jason Hoppy (2010).

Marcus is the step-father to Bobbi’s two children

Before meeting her man, Bobbi lived a life almost out of the public glare. Thus, the information about her professional and personal life is still a little bit unclear. Still, we do know that she is a happy mother of two children; a son and a daughter. The identity of Roberta’s former boyfriend or husband with whom she shares her two kids is not known.

Her 43-year-old son is a teacher by profession. On the other side, Roberta also has grandchildren from both of her children’s marriages. Her Instagram is filled with loving family photos.

The couple has more than 20 years age gap. While Marcus Lemonis was born on 16th November 1973, his wife, Roberta celebrates her birthday on 21st September 1950. Regardless, they have no qualms about the immense age gap.

Despite such a huge difference, they have successfully balanced their love life and business work with the same efficiency. Both of them are a keen user of social media and often posts beautiful vacationing posts on their respective accounts. They enjoy zip-lining, bike riding, and hiking.

Who is Marcus Lemonis’ wife Roberta Raffel aka Bobbi Lemonis?

Bobbi is a businesswoman who previously owned a fashion business that later her hubby Marcus bought. She used to work as a sales manager.

The woman with strong ties in the fashion world reportedly bought 99,094 shares in Lemonis’ company, Camping World that is worth $1.3 million. Even after investing such tremendous capital in the business, her husband Marcus still owns 52% of the shares.

Besides, Bobbi is a University of Illinois at Urbana Champaign graduate.