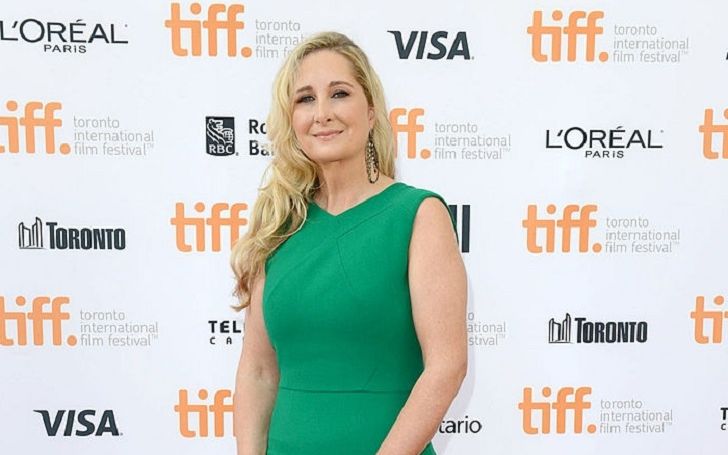 Marcy Wudarski is an occasional producer who came into the limelight as the first wife of late legendary actor and producer James Gandolfini. Throughout his tenure in Hollywood, James had worked in numerous blockbuster movies that include True Romance, The Last Castle, Where the Wild Things Are, and more.

Despite his wide reputation in the industry, the former Hollywood star seemingly wasn’t successful in his love life, especially when it comes to his first marriage with Marcy. The former flames had a difficult divorce within a few years of their marriage. Despite their nasty ending, the two remained close pals in the final years of Gandolfini’s life. Marcy and her late ex-husband shared a grown son too.

Well, after James’s death, what is Marcy Wudarski up to these days? Here are things that you didn’t know about James Gandolfini’s first wife!

How Old is Marcy Wudarski? Her Childhood

As of 2021, Marcy’s age is 54. She was born on 6th February 1967, in Hudson, the United States of America. Growing up in her hometown of Hudson, Wudarski has an American nationality and belongs to the Caucasian ethnicity.

Both of Her Parents Died

Wudarski is the daughter of Edward B. Wudarski and Mary Ann Wudarski. Both of them were Pennsylvania natives. Born in March 1920, Marcy’s father Edward died on 23rd March, six days after his 66th birthday in 1986. He was a former Army lieutenant colonel and a retired comptroller for the Department of the Army in Washington. The late old man was also an Army veteran of World War 2 and the Korean War.

What Does Marcy Wudarski Do for a Living? Details on Her Career

Wudarsk previously worked as a producer. She has only one acting credit as an executive producer. Back in 2013, the ex-celebrity spouse worked in Wish You Were Here. Other than that there is nothing more about her professional life.

Besides, Marcy’s late ex-spouse James was one of the iconic actors in Hollywood. He began an acting career with the role of Tony Baldessari in the drama movie A Stronger Among Us in 1992. A year after, the actor performed in four on-screen projects Money for Nothing, True Romance, Mr. Wonderful, and Italian Movie.

Gandolfini rose to fame following his role in True Romance (1993). Later on, James worked in many highly acclaimed films that include The Taking of Pelham 123, Enough Said, and more. For his roles in both movies and TV shows, James received wide critical praise and has also won several accolades like the Boston Society of Film Critics Award. He also got the nomination for Screen Actors Guild Award.

Marcy Wudarski is James Gandolfini’s First Wife: When did they Marry?

Wudarski and Gandolfini exchanged their vows in March 1999, in a low-key wedding ceremony. Although the former flames kept most of their early marriage details to themselves, they reportedly dated for over a year before their nuptials.

A couple of months after they exchanged their vows, Marcy and her then-husband James likewise started a family together. The two welcomed their child, a son Michael Gandolfini on May 10, 1999.

However, a few years after their marriage, things started becoming quite complicated between the two. And James unanticipatedly filed for divorce in 2003. At the time, the decision of his sudden departure literally shocked his wife Marcy.

According to online tabloids, their marriage hit the rough patch in early 2001 when Gandolfini had left Marcy’s mansion in the West Village on 1st Feb of the year. And the actor never went back. He filed for divorce from his first spouse in March 2002. Nevertheless, their divorce proceeding initially didn’t go well. Amidst a bitter divorce dispute between the two, Marcy accused her hubby of taking drugs with other actors of the Channel 4 series.

James Gandolfini’s first wife even hired private detectives to follow her hubby in various cities like L.A. to know if James was still into the drug and alcohol. She later submitted some testimonies to the court.

In the meantime, Marcy claimed that her hubby was also placed into the drug and alcohol rehabilitation center in 1998. He was likewise reportedly in a romantic relationship with a string of women, including a stripper.

In October 2002, the actor admitted to The National Enquirer that He had a problem with cocaine and alcohol four years earlier not now.

Furthermore, the actor claimed that Marcy’s emotional instability and volatile temper break down their marriage.

In December 2002, they officially divorced. Upon finalizing their divorce, Nancy stayed at their adJoining duplex in the West Village, worth $2 million. Their then-three-year-old son continued to live with his mother. James subsequently acquired a house in nearby Tribeca.

Tabloids suggest, despite their initial personal drama, their separation was amicable.

Although Marcy and James weren’t in a good relationship for the most part of their marriage, the two later maintained a healthy relationship for the sake of their son. However, James passed away suddenly on 19th June 2013 in Rome. He was 51 at the time of his death. Upon his passing, Marcy was also seen mourning his death in New York.

Like his late father, Michael, 22, has shared the same love for acting. The emerging actor with limited acting credits landed his first official role, portraying Joey Dwyer in the TV series The Deuce in 2018. The same year, Michael made his movie debut with the role of Busboy in Ocean’s 8. His other credits include The Many Saints of Newark, Cherry, Acting for a Cause, and more.

Since her divorce from James, Marcy has relatively kept her life behind the public. Apparently, online sources suggest that Wudarski now resides with her son in New York.

Besides, the 54-year-old is also active on Instagram but has kept her account private. So, most of her latest information remains out of the media.