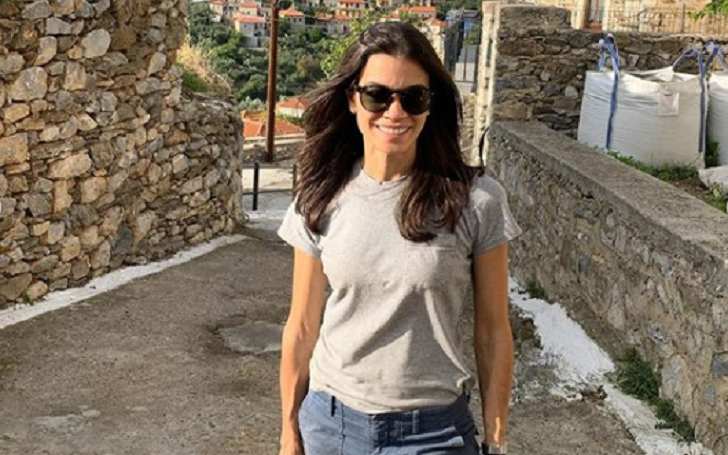 Margaret Anne Williams is a marketing executive who has been in the spotlight as the wife of the chef, Geoffrey Zakarian. Besides, Anne currently serves as the director of marketing for the company 3Sixty Hospitality, in New York.

Aside from their professional endeavors, the two are in a blissful married life for several years now. Let’s take a close look at their relationship and find out about their children, their first meeting, and many other interesting facts about Margaret.

The two walked down the aisle in front of their families and close friends. They are happily married ever since which in itself speaks highly of their commitment to each other.

Margaret Met Her Husband in 2002

Williams and Zakarian met for the first time at Indochine NYC, a Vietnamese restaurant on 8th March 2002. The duo was in a business meeting when they met each other. In the meantime, several sources also report the two first met through their mutual friend.

In March 2017, Margaret shared a photo on Insta from the same place in the honor of their encounter. She wrote on the photo,

“15 years ago to the day @gzchef and I met at this iconic address @indochinenyc during daylight hours for a business meeting. We went back tonight for a memorable meal and to celebrate that chance encounter. Happy 15 GZ – thank you for our beautiful family and the incredible years we have shared together.”

The two dated for a few years before their marriage in 2005.

The couple has a considerable age gap of 20 years

Sometimes we think the age gap in love, especially in marriage, plays a big role for the couple to make their relationship more romantic and enduring. But sometimes the age gap in love transcends every border and bounds. Similarly, this could be said for Geoffrey, 62, and his wife Margaret, 42.

In fact, the first thing that attracted them to each other was the same business approach they had. They both are pretty successful in their profession and know how to balance their love life and professional life hand in hand.

Furthermore, they welcomed another little bundle of joy, a son, George Harris on April 17, 2014. He weighed 6 pounds at the time of his birth.

The family of five enjoys a lot of things together including cooking, hiking, traveling, and more.

Their Daughters also love to write

It looks like Madeline and Anna are following in their father’s footprints. They worked tirelessly on their cookbook called The Family That Cooks Together. The book was released on October 6, 2020. On April 21st, the chef also posted a photo of the book tributing to his daughters’ great effort.

The book will give you Geoffrey’s daughter’s perspective on their kitchen, culinary adventures, and family life in a busy kitchen. They also present easy-to-make meals and snacks.

Furthermore, in August 2018, the girls made an appearance on the Food Network’s series The Kitchen.

There are no reports on Margaret’s past love affairs. But, her life partner Geoffrey was previously married to Heather Karaman. Sources reported the couple divorced after 10-year of marriage. However, the reason behind their separation never came to the media.

What does Margaret Zakarian do for a living? She runs several restaurants with her hubby

Margaret is now a marketing executive. She runs several successful restaurants around the States with her husband with the great combinations of Margaret’s unique business talents and Geoffrey’s world-class cooking skills.

One of their restaurants called Town is located in Manhattan and opened in the Spring of 2001. However, it closed after eight years in 2009. The New York Times rated the restaurant with three stars.

Their other 3-star restaurant called Country in Manhattan opened in 2005. This dining venus also has earned a Michelin Star.

Besides their busy business life, Margaret and her husband Geoffrey somehow manage their time for the charity effort. Back in October 2018, the couple stepped out to attend an event “City Harvest’s BID against hunger.” Several other individuals also participated in the event.

The campaign’s purpose is to raise funds through auctions and other activities to reduce starvation and hunger in New York City.

Furthermore, Margaret popped up on The Great New York Foodathon: A Star-Studded Special to Benefit City Harvest in 2020. It provides food for New Yorkers who are in need.

Margaret Is the Director of 3Sixty Hospitality

Margaret Anne Williams has been working as the director of marketing for 3Sixty Hospitality for several years now. The New York-based company owns Lotus, a restaurant and nightclub. It has been branched out in two other countries France and Germany as well.

On the other side, 3Sixty also operates Double Seven, a cocktail lounge that is considered one of the most luxurious lounges in New York City.

Geoffrey Zakarian’s wife Margaret appeared in several popular TV programs with her husband. She featured in the TV program named The 86th Macy’s Thanksgiving Day Parade in 2012. The show also won the Daytime Creative Arts Emmy Award nominations. She appeared on the series The Kitchen that aired on Food Network in 2014.

Besides, he is an author and released his first book Geoffrey Zakarian’s Town / Country in 2006.

What is Margaret Anne Williams’ Age?

Her age is 42 as of 2022. Margaret Anne was born on 12th June 1979, in the United States of America. She holds an American nationality and belongs to the Caucasian ethnicity.

As for her education, Margaret attended New York University.

Who are Margaret’s Parents?

Margaret Anne Williams is the daughter of Francis M. Williams and Marie. Her father is from Tampa, Florida. She also has a sister named Debra Williams0.

Her Dad is the CEO of Kimmins Contracting Corporation

Francis is the chairman and chief executive of Kimmins Contracting Corporation. The company is located in Tampa, Florida is involved in demolition and construction. It provides construction services as well.

The daughter of a successful businessman, Margaret also followed in her father’s footsteps.

She has earned a good amount of fortune from her business career. Her net worth stands at $500,000 as of 202s. On the other hand, her husband Geoffrey has an estimated net worth of $6 million net worth.

Margaret is quite active on Instagram while her existence on other social media platforms remains pretty secret. She has 33.7k Instagram followers as of 2022. She mostly shares family photos and culinary adventures on her account.