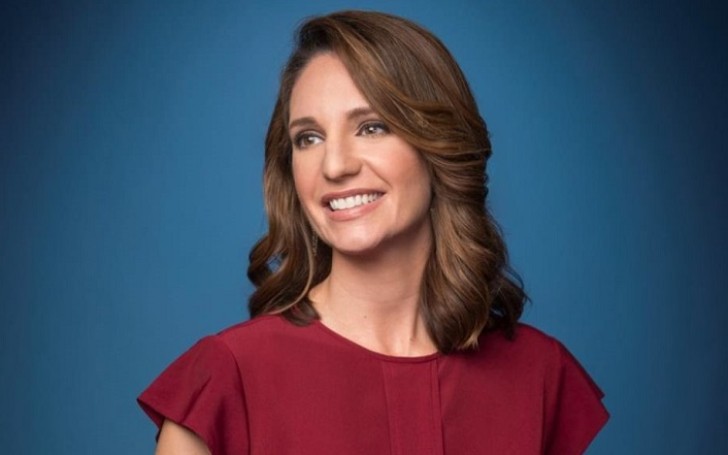 Maria LaRosa is a prominent meteorologist with wide knowledge and experience. The media personality gained popularity after spent almost nine-year at The Weather Channel. She is currently a member of NBC 4 New York’s Storm Team 4 weather team.

Besides, LaRosa is blissfully married to her husband Mariusz Kolakowski for years now. The two are also blessed with three children.

Here, we are going to add several other facts about Maria.

LaRosa was born on 7th November 1976, in New York, to American parents. She shares a deep bond with her mom and dad. She often shares beautiful snaps with her parents on her social media.

LaRosa shared a picture when she was a toddler with her mom and older brother on Insta on 5th October 2017.

#TBT My beautiful mom and cutie pie big bro (and me!). With their slouchy knit hats, are they the original hipsters??

Furthermore, Maria wished her dad on the occasion of Father’s Day by posting a photo with him on Insta on 17th June 2018.

LaRosa grew up in Ramsey with her two siblings. She has an older brother named Nick and a younger sister Eileen. She uploads pictures with them on every occasion of National Sibling Day.

Happy #NationalSiblingDay to the best of the best, my brother & sister! If they weren’t the greatest, my #middlechildsyndrome would be even worse!

They are very close to each other and are often seen together.

How Old Is LaRosa?

LaRosa holds an American nationality and belongs to the white ethnicity.

Maria attended Penn State University and obtained a Bachelor of Science degree in Meteorology in 1998. She is a certified broadcast meteorologist from the American Meteorological Society (AMS).

Maria LaRosa started off her career landing the job as a meteorologist of ABC affiliate WTVM-TV in 1998 and worked until 2000. She spent her next four years at Fox affiliate WXIX, before joining KYW-TV as weekday morning and noon meteorologist.

LaRosa joined the network in 2010 and started working as a co-anchor of Weekend Now. She subsequently became part of many other known programs like PM Edition Weekend, First Outlook, and more.

The journalist co-hosted Wake Up With AI (2012-14) with Stephanie Abrams and Al Roker. From 2012-14, Maria also co-hosted Morning Rush. Additionally, she became a co-anchor of America’s Morning Headquarters (2014-15).

LaRosa currently works for NBC 4 New York’s Storm Team 4 weather team. They forecast accurate weather data every weekday morning between 4 AM and 7 AM.

LaRosa has earned good fortune from her journalism career. Sources suggest her net worth stands at $500,000 as of 2020.

Maria LaRosa Married Life: Who is Her Husband?

LaRosa is married to her husband Mariusz Kolakowski for a long time now. They both have remained tight-lipped about their love life throughout their relationship.

Although the precise date of their wedding is never revealed, sources suggest the two tied the knot back in the early 2000s.

When Did LaRosa and Kolakowski Meet?

As per the Instagram post, Maria shared on 3rd August 2017, the two first came across on the same day 20 years ago in 1997. She mentioned in the photo,

“20 years ago to the day–the night we met. If I could go back & tell these 2 crazy kids about what was ahead…😳🤣 #lifesajourney #myguy”

Thus, it is safe to say, the couple started dating in the late 1990s and is together for over two decades.

The Couple Has Three Children

Maria and her life partner Mariusz welcomed their first child, a son named Michael in 2005. Their second son Justin was born in 2008.

On 3rd May 2010, LaRosa gave birth to their third baby boy, Tyler. She frequently shares adorable photos with her family on Instagram.

LaRosa currently resides in New Jersey along with her hubby and three sons.

Yes, you read it right! The Weather Channel meteorologist Mike Bettes once mentioned Maria as his ex-wife. Apparently, in a tweet by Mike in November 2016, he called her his work ex-wife.

Is an Animal Lover

Maria owns a cat called Luna. Furthermore, she is also a dog person who owns an adopted puppy Kona.