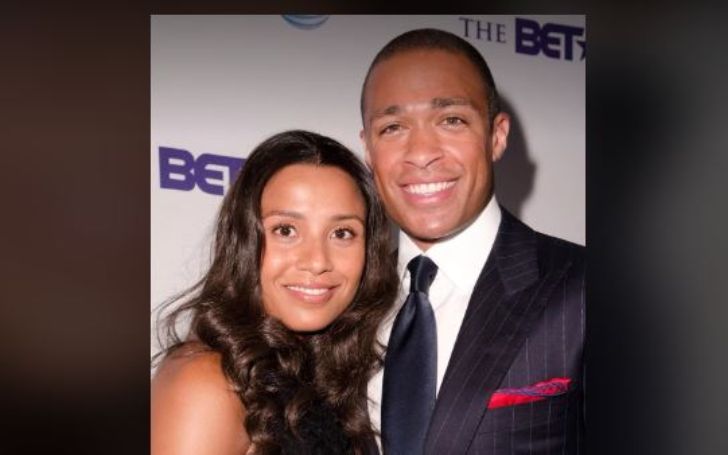 Marilee Fiebig is a business immigration attorney formerly based out of Atlanta, Georgia. She though is better known as the wife of the ex-CNN host and now ABC correspondent, TJ Holmes. Holmes’ spouse, Fiebig is a lawyer and business executive in the fashion and entertainment industries filled with experience.

She was the ex-vice president of operations and general counsel of Willhelmina International Inc. She often works to break borders and open opportunities for young people whilst also helping them to reach their potential once they enter the states.

Marilee is also at Save The Children where she has been focusing on diversity, inclusion, & belonging initiatives. In the meantime, she also oversees leadership roles in fashion, entertainment, operations, and philanthropy. Learn more about her including her parents, her law career, her marital details, and so on.

Marilee Fiebig Parents, Her Mother Is An African Immigrant

Fiebig, who was born in Oct 1977, is one of the three children of her parents, William and Pauline Fiebig. Marilee’s father William is a Peace Corps volunteer while her mother, Pauline an African immigrant. Fiebig describes her father as a real-world humanitarian and her superhero.

Mrs. Holmes was born in what is now the Democratic Republic Of The Congo. She immigrated to the US with her family at age 5.

Fiebig’s family returned to the African continent decades later. Upon returning, Marilee’s father used his credentials in agronomy and genetics and resourced them to bring agriculture and fishery to impoverished villages and communities throughout Africa. He also carried out similar projects in other developing parts of the world.

Marilee’s mother, on the other hand, would try to emphasize the importance of education for Fiebig and her siblings. Fiebig’s mother got her US citizenship when her children were elementary school students in Florida. Marilee says her mother becoming a US citizen was one of the proudest moments in her life.

Fiebig graduated with a bachelor’s degree in French and poli-sci from the University of Michigan. Later she also got a law degree from Vanderbilt University.

At Vanderbilt, she belonged to Phi Delta Phi Honors Fraternity

What Does Marilee Do Now?

Marilee now is a senior director for diversity, inclusion, and belonging at Save The Children. The Arkansas-born news correspondent’s wife joined the organization in the summer of 2021 and has been with it ever since.

Marilee after working as an attorney for several law firms, would join Wilhelmina and work there for almost 4 years. As mentioned she was the vice president of operations and general counsel of Willhelmina International Inc.

Her responsibilities back then primarily included smoothing the immigration process for young people across the world. After their arrival, she also made sure they get to work in the space free from exploitation, harassment, and any other abuse.

Marilee also aimed to emphasize the importance of a woman’s point of view in upper management. As a woman, Fiebig believes, she has a natural empathy for models and that she can provide them with a unique perspective.

Part of her job also needed her to assess all the necessary documentation to build a case for Wilhelmina’s models. So far, Marilee as an immigration attorney has successfully secured nonimmigrant and immigrant visas for numerous clients. Mrs. Holmes became Wilhelmina’s in-house lawyer in April 2016. It was just before the explosion of the #MeToo movement.

Before Wilhelmina, Fiebig was working on behalf of multinational financial and technology businesses, pharmaceutical companies, major universities, and several sports teams. In almost all of them, her role was the same; help facilitate the importing of international talent.

While the process of bringing a foreigner to the US is arduous, Marilee says the topic of immigration is her passion and something that is deeply personal.

She is also a contributing factor in building out the company’s internal operations structure. Marilee further deals with staffing issues, contracts, and corporate litigation. She apparently chose law as her career because she wanted to work in international relations and diplomacy.

While it is unclear when and how Marilee and her husband TJ Holmes met each other, the two apparently started dating sometime in the summer of 2009. This was allegedly after the latter’s break up with R and B singer Rozonda Chilli Thomas.

Fiebig and the one-time MSNBC anchor married on March 1, 2010, which reportedly was one year of their relationship. After the marriage, the couple became parents to a daughter, Sabine whom they welcomed in Jan 2013.

In addition to Sabine, Marilee’s husband, Holmes also has two more children. The ex-CNN host shares a daughter Dian with his ex-wife Amy and a son, Jaiden with his high school ex-girlfriend Brooke More.

Holmes once said part of the reason his and Fiebig’s marriage has lasted so far is that the Vandelbirt graduate always looks out for him, advises him, keeps him on track, and also stops her from making a mistake.

What Is Marilee Fiebig Net Worth?

Although the ABC News host TJ Holmes is definitively rich with his net worth reportedly hovering around $3 million, no such reckoning or dissolution has been made for his longtime partner, Marilee Fiebig.

But for all that, assuming her impressive career and the life she puts on her Instagram and her socials it is possible that she is also financially first class on her own. If nothing at all, Fiebig’s net worth could very well be in the region of six figures or clearly above the average numbers.