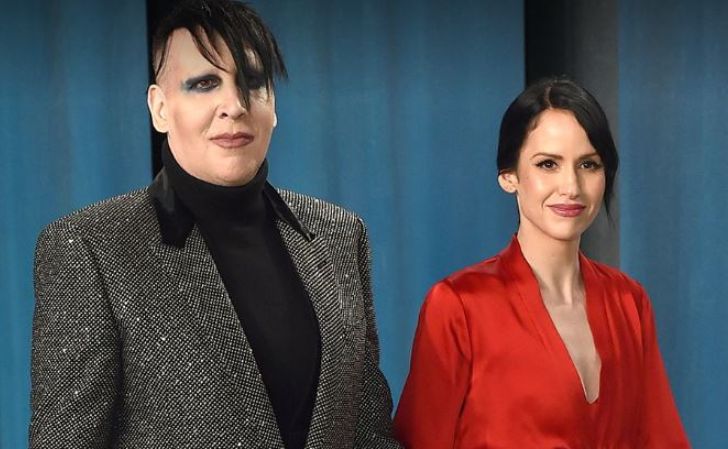 Lindsay Usich is a photographer who is known for her relationship with the Antichrist Superstar singer and heavy metal singer, Marilyn Manson. Usich has often done photography work for her husband, Manson; her works have also been featured in several journals including Frank Magazine.

Lindsay controversially has been a supportive wife to Marilyn Manson considering a slew of allegations against him from numerous ex-girlfriends – including sexual and physical assault.

Despite all these, Usich is still standing by his side. Know what she takes on the accusations thrown at her partner, Mansion. In motion also know about her past life, family, career, and others.

Manson’s current wife, Lindsay Usich was born on October 2nd, 1984, in Miami, Florida. She is one of two daughters of James Usich and Hope. The now 38 years old Lindsay has a twin sister named Ashley Usich.

Lindsay’s sister, Ashley is a designer who is married to James Iha of A Perfect Circle. Asley also features heavily in her twin sister, Linsay’s pictures.

Lindsay and Manson’s relationship started as far back as 2010 although some reports suggest they have been together since 2012.

They, however, married each other only during the pandemic 2020 amidst the international lockdown.

Lindsay Usich Career As A Photographer

Lindsay developed a passion for photography in childhood whenever she would write and sketch with her twin sister in Miami. She used to experiment with polaroids and loved using 35mm film and has avoided digital photography ever since.

Although Usich took some formal photography training as a teenager, she found the traditional model of the course heavy and mostly taught herself during her travels around the world.

For self-learning, she used her intuition to decide what would work and what wouldn’t.

During her mid-20s, Lindsay lived in New York where she spent most of her time painting and working on a fledgling jewelry line. The photos on Usich’s blog, Born From The Dirt, are an accumulation and result of her travels across the map in the past years as well as intimate moments that she finds beauty in her everyday life.

A lot of Usich’s work mixes femininity with a darker edge, e.g the flowers shot at night. Once while explaining the meaning behind this, Lindsay said,

Femininity and romanticism often go hand in hand with darker, more macabre elements- this is especially true in my everyday life.

Usich also admitted – through her photos, she tries to balance and lend a delicate feeling to what could become dissolute through the softness of flowers.

Lindsay says while she knows the story behind every photo, she also wants the viewer to interpret it on their own. She has mostly taken her pictures at dusk and sunsets.

The Thirteen actress, Wood publicly named Manson as her alleged abuser on Feb. 1, 2021.

At the same time, at least four other women — Sarah McNeilly, Ashley Morgan Smithline (AKA Ashley Lindsay Morgan), Ashley Walters, and a woman named Gabriella — joined Wood by each sharing their own separate accusations against the Mechanical Animals singer.

Wood also had a former personal assistant for MMansonas her supporter. Wood and Manson were together from 2006 to 2010. Evan, however, publicly revealed she was abused only in  Feb 2018; though the Phoenix Rising star then didn’t name who her abuser was.

The North Carolina-born actress mentioned her abuse story whilst joining other activists in testifying before the U.S. Congress during a hearing of the House Judiciary Subcommittee on Crime, Terrorism, Homeland Security and Investigations in Washington, D.C.

During the promotion for the implementation of the 2016 Sexual Assault Survivors’ Bill of Rights Act in all 50 states, Wood brought up horrific experiences of sexual assault and torture she said she had suffered from a “man that claimed to love” her.

She said there was another attacker as well. She, however, did not name the alleged abusers. Wood in an interview with Rolling Stone in 2016 said she endured “physical, psychological [and] sexual” abuse.

Actress Charlyne Yi from the film, Paper Heart had also accused Manson of harassment. She also added how the Canton native made sexually abusive and racially insensitive remarks toward her.

To date, fifteen women have come forward to accuse Manson.  They have complained of sexual violence and both physical and psychological abuse. Ashley Morgan Smithline, an actress and former model, in May 2021 told People that Manson is the “most terrifying monster in the world.”

A week prior, the English actress, Esmé Bianco, a Game of Thrones cast member also filed a lawsuit against Manson and his former manager, Tony Ciulla, alleging sexual assault and sex trafficking.

Manson, as for his defense, said the accusations were false. He admitted while his art and life had long been magnets for controversy, the claims about him were horrible distortions of reality.

Manson said his intimate relationships had always been entirely consensual with like-minded partners. He stated his accusers were just choosing to misrepresent the past. Via his attorney, the singer/painter denied all allegations of assault. He insisted his former partners were “cynically and dishonestly seeking to monetize and exploit the #MeToo movement.”

What Lindsay Usich Said About The Accusations Thrown At Her Husband?

Manson’s current wife, Usich never commented on the allegations. Though, a metal artist, Otep Shamaya in Feb 2021 claimed Lindsay too faced abuse from her partner, Manson.

Otep, at the time, said she had learned about Usich facing abuse from her ex-partner who happened to be good friends with Usich.

Shamaya said she was privy to conversations that her girlfriend and Usich would have, which described Manson’s heavy drug use and threats of violence against Lindsay. Usich, however, never addressed the allegations of her husband abusing her in any manner.

Are Lindsay And Marilyn Manson Still Together?

There were reports in 2015 that Lindsay and Manson were no longer together, but the couple appeared by each other’s side later that year.

The couple, however, didn’t show up by each other’s side for a while after Manson’s controversy. Then in Feb 2022 Lindsay and Mansion were seen for the first time together since the former was accused of sexual abuse and domestic violence.

The photographer wife of Manson last mentioned her husband in May 2022 posting his image on her official Instagram handle with a caption, “Forever.”

While, Manson’s partner, Lindsay never really responded to the accusations her husband was facing, in May 2021, she and her rocker husband attempted to silence at least one Instagram account, by the name, Mansonisabusive.

The handle strived to expose the accusations of abuse that Kinderfeld singer had apparently committed. Later, the woman, Laura who ran the Instagram account said Usich threatened to dox her.

Laura said the Mansion’s current partner talked a lot about IP addresses and how she knew her location and stuff. Later, Manson and Usich both blocked Laura’s personal Instagram account.

How Rich Is Lindsay’s Husband, Marilyn Manson; What Is His Net Worth?

For all his gothic musical creations, Lindsay’s partner, and hard rock artist, Manson is by definition a rich entertainer. Although an obvious estimate of Mansion’s net worth is still pending, active since the late ’80s, Mansion is reportedly a multi-millionaire with his financial standings lying in the region of eight figures or so.

In fact, before the sexual allegations, the Cake and Sodomy singer reportedly had more wealth. His financial achievements took a hit after he lost contracts from several companies. Some have put down a statement claiming Lindsay’s husband lost almost half of his original net worth in the wake of the abuse complaints.

Is Lindsay On Social Media?

Mansion’s wife, Usich is animatedly present on Instagram. She was also quite up and running on Facebook up until mid-2021. Usich, for now, is specifically prevalent on her image-sharing hangouts. Most of her Insta feeds include her photography skills with occasional pictures of her husband, Mansion.